While Lady Gaga’s show-stopping turn as ingénue Ally in A Star Is Born is generating major buzz this awards season, the pop star is a seasoned veteran when it comes to serving hair, body and face on the red carpet. As fearless in her fashion sense as she is with her craft as an entertainer, Stefani Germanotta’s red carpet looks function less as clothing and more as an extension of her performance art.

From dramatic and theatrical looks during the early years of her career to the controversial fashion statements she’s made along the way (her raw meat dress and being carried into the Grammys in an egg carriage come to mind,) Gaga’s always known how to make an entrance on the red carpet. Case in point? The voluminous, show-stopping periwinkle custom Valentino Couture gown with a never-ending train that Gaga wore for the first major awards ceremony, the Golden Globes. As Lady Gaga takes on the red carpets of awards season 2019, here’s a look back at the most outrageous, over-the-top and out of this world looks that she’s worn from past to present.

2009 Much Music Video Awards — Gaga turned heads in a dress made of hair by her own design label, Haus of Gaga. A poodle-inspired matching purse and a sleek, braid-adorned bob completed the look.

2010 Grammys – Gaga wore Armani Privé for both her sparkling intergalactic pre-ceremony red carpet look and the geometric, origami-inspired outfit she wore after her performance.

2010 Amfar Gala – Gaga took demure pearls to the next level with a pantless ensemble that included an embellished motorcycle jacket and matching hat and face makeup masterminded by Terence Koh and Nicola Formichetti in collaboration with Haus of Gaga.

2010 MTV VMAs – Gaga paid tribute to late designer and close friend Alexander McQueen with her pre-ceremony look; what really made headlines was her raw meat dress by Franc Fernandez.

2011 Grammys – Gaga made an entrance not soon to be forgotten at the 2011 Grammy Awards when she was carried across the red carpet and into the ceremony in an egg held aloft by little monsters clad in latex.

2011 MTV VMAs – Gaga stayed in character as her drag alter ego, the dapper Jo Calderone, for the majority of the 2011 MTV VMAs.

2015 Oscars – Gaga was avant garde high fashion at its best in a stunning Azzedine Alaia and red gloves at the 2015 Oscars Ceremony.

2016 Met Gala – Gaga ditched pants but added inches with a pair of extreme platform heeled boots that amped up the drama of her body-conscious, embellished Atelier Versace leotard and light-up blazer, keeping well within the theme of the Met Gala, “Manus x Machina: Fashion in the Age of Technology.”

2019 Golden Globes – Gaga paid homage to Judy Garland’s turn in 1954 A Star is Born with her lunar blue strapless gown with an immense train, a custom Valentino Couture look.

At the 91st Academy Awards Gaga channeled Audrey Hepburn’s polished Breakfast at Tiffany’s ensemble in a black Alexander McQueen gown and matching gloves, topping it off with a Tiffany Diamond worn by screen goddess herself in 1961. 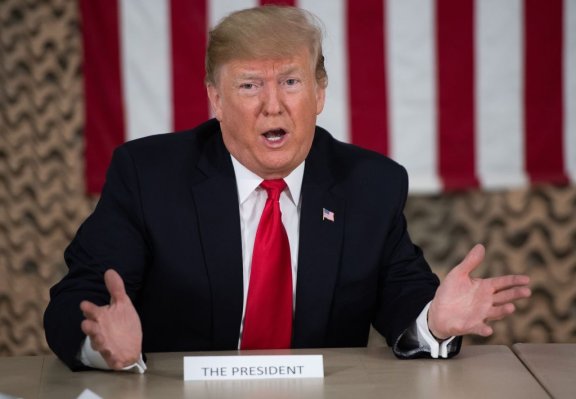 Meet the Man Who Turned Trump's 'Flip Flops' Into Actual Flip Flops You Can Wear to the Pool
Next Up: Editor's Pick