In the midst of an ongoing battle over women’s right to visit an important Hindu temple, women in the southern Indian state of Kerala lined up to form a 620km (385-mile) human chain in a mass demonstration for gender equality on Tuesday, reported the BBC.

The protest comes during a fraught period for religious and gender rights in Kerala. In September, India’s highest court overturned a historical ban on women of “menstruating age,” defined to be between ages 10 and 50, from entering the state’s Sabarimala shrine. Protesters have attacked women who attempting to visit the temple.

Tuesday’s rally was organized by Kerala’s left-leaning government, with approximately five million women from across the state taking part in the “women’s wall,” officials told the BBC.

Kerala Chief Minister Pinarayi Vijayan of the Communist Party of India (Marxist) said on Monday that women’s issues were “part of the party’s class struggle,” reported the Indian Express. He went on to say that the women’s wall “is required to protect the renaissance tradition of the state.”

Most Hindu temples allow women to enter if they are not currently menstruating, rather than disallowing women from a broad age group, according to the BBC. Some Hindu communities regard menstruating women as unclean.

Two women were able to reach the Sabarimala temple premises in October, thanks to the protection of more than 100 police, but they were forced to retreat after a confrontation with protesters outside the temple sanctum, reported the BBC.

The fight over women’s right to enter the temple also comes in the lead-up to India’s general election in April and May. India’s ruling Bharatiya Janata Party (BJP), which has pursued a Hindu nationalist agenda, has painted the September court ruling as an attack on traditional Hindu values. Critics have accused the BJP of exacerbating religious tensions in order to rally their conservative Hindu base.

In an interview with Reuters affiliate ANI on Tuesday, Prime Minister Narendra Modi expressed confidence in the BJP’s prospects in the upcoming elections, despite the party’s recent losses in state contests.

“In 2019, if there is one party which the country trusts and is connected with the people, it is the BJP,” Modi told ANI. 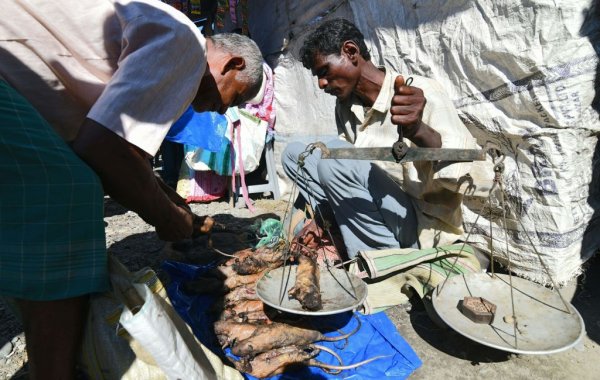 This Village in India Has an Unexpected Source of Income
Next Up: Editor's Pick