A migrant inside of a van waiting to be transferred to a center in Malaga, Spain on Nov. 22, 2018.
NurPhoto—NurPhoto via Getty Images
By Billy Perrigo

The boat endured an uncertain week at sea during which Malta refused it permission to land and three passengers were evacuated for health reasons.

The migrants, from 19 different countries, were rescued from waters off Libya last week, and celebrated Christmas aboard the vessel, which is run by the group Proactiva Open Arms.

The group released a video on Friday of the migrants disembarking in Spain, which in 2018 has accepted more migrants than Italy and Greece — traditional destinations which have largely closed their doors amid a climate of resentment towards refugees.

The Proactiva saga is just the latest reminder of Europe’s ongoing migrant crisis, in which more than 17,000 people have died since 2014.

Whilst numbers of migrants attempting the dangerous Mediterranean crossing have decreased from a height of more than 1 million in 2015, the route is still popular and deadly.

This year, more than 112,000 migrants arrived in Europe across the sea. Another 2,241 people died or went missing in the attempt, according to UNHCR estimates.

That makes 2018 the year with the lowest number of deaths and arrivals since 2014. But part of the reason there have been fewer deaths is because fewer people are attempting the trip.

Proportionally, the numbers tell a different story. Between January and July 2018, one in every 18 people attempting the trip died. “Three years on from the shocking images of lifeless Syrian toddler Alan Kurdi on a Turkish beach,” the UNHCR said in September, “crossing the Mediterranean Sea has become even more deadly.”

Part of the reason for the decreased numbers is preventative measures the E.U. has put in place, including supporting authorities in Libya.

In Libya, some 6,000 people are housed in “detention centers” to prevent them from crossing the sea to Europe. When clashes broke out in Libya in August, many were left locked in these centers without food or water.

Reports of abuse are common, and some migrants have attempted to take their own lives. A recent UN report said migrants and refugees in Libya are being subjected to “unimaginable horrors” including unlawful killings, arbitrary detention and torture, gang rape, slavery and human trafficking. The report described the situation as a “local and international failure”.

“Cruel policies by E.U. states to stop people arriving on European shores, coupled with their woefully insufficient support to help refugees reach safety through regular routes, means that thousands of men, women and children are trapped in Libya facing horrific abuses with no way out,” said Heba Morayef, Amnesty International’s Middle East and North Africa Director, in a statement.

How does the situation in Europe compare to the one in the U.S.?

But despite greater numbers, the U.S. route is safer than the Mediterranean one. In 2017, the US Border Patrol reported 294 migrant deaths, compared to the UNHCR’s count of 3,139 dead or missing on their way to Europe the same year.

In 2015, when the greatest number of people were attempting to enter Europe, the German government under Angela Merkel offered asylum to any migrant who could reach the country. By the end of that year, some 1 million people had entered Europe, many driven by the desire to settle in Germany.

At the same time, measures put in place by the E.U. to bring down migrant numbers have started to come into effect, which has caused the numbers attempting the trip to drop.

In the U.S., like Europe, there has been a marked increase in anti-migrant rhetoric from those in power.

“We should remain vigilant to ensure that the language of politics does not create space for mistreatment and violence, including of a racist nature,” said the UNHCR’s high commissioner, Fillipo Grandi in September.

“Sometimes the political language has become so aggressive that, even when it is not intended to be racist or discriminatory, it can create space for latent tendencies within society. This unease can then be transferred onto foreigners, onto refugees and migrants, who are at the centre of the debate.”

In both the U.S. and European cases, people seeking asylum have been confused with those migrating for economic or other reasons, according to Elizabeth Throssell, a UNHCR spokesperson for the Americas and Europe.

“For the UN Refugee Agency, these situations are not crises of numbers or crises in themselves, but have taken on a political dimension and are often a crisis of political will,” she tells TIME. “It is important that the focus remains a humanitarian and life-saving one.” 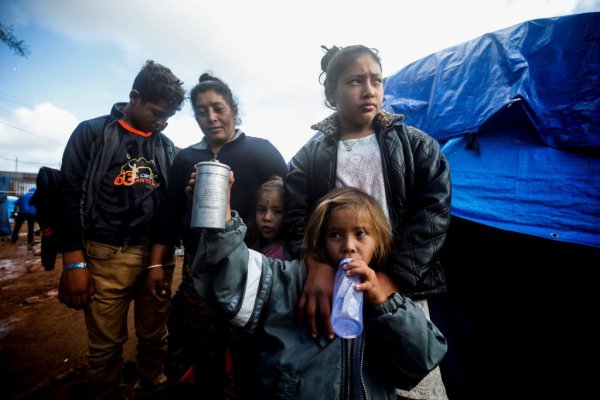