President Trump returned to Washington D.C. early Thursday following a surprise trip to Iraq where he greeted U.S. service members stationed there for the first time in his nearly two years in office.

Trump and First Lady Melania Trump made the unannounced trip to Al Asad Air Base about a week after the President made the controversial decision to pull U.S. troops out of Syria, which borders Iraq. Trump defended the decision while addressing troops Wednesday, saying that ISIS has been defeated in Syria.

President Donald Trump and First Lady Melania Trump arrive to speak to members of the US military during an unannounced trip to Al Asad Air Base in Iraq on December 26, 2018.
SAUL LOEB—AFP/Getty Images

Trump’s move to pull troops from Syria has has drawn criticism from military officials who are now tasked with finding a way to withdraw from the country without abandoning allies or reversing the gains made against ISIS. While the terrorist group has been subdued, it is still present in Syria.

Trump told troops in Iraq that his choice to pull out of Syria is part of his “America first” agenda. “We’re no longer suckers, folks,” he said. “We’re respected again as a nation.”

During his visit, Trump spoke by phone with Iraqi Prime Minister Adel Abdul-Mahdi, the Associated Press reports. The Prime Minister’s office said “differences in points of view over the arrangements” prevented a meeting between the two leaders. In Iraq’s parliament, two major blocks condemned Trump’s visit, saying it violated the country’s sovereignty.

President Donald Trump and First Lady Melania Trump greet members of the US military during an unannounced trip to Al Asad Air Base in Iraq on December 26, 2018.
SAUL LOEB—AFP/Getty Images

Trump also greeted troops at the Ramstein Air Force Base in Germany during a refueling stop. He commended service members in a tweet upon returning to D.C. 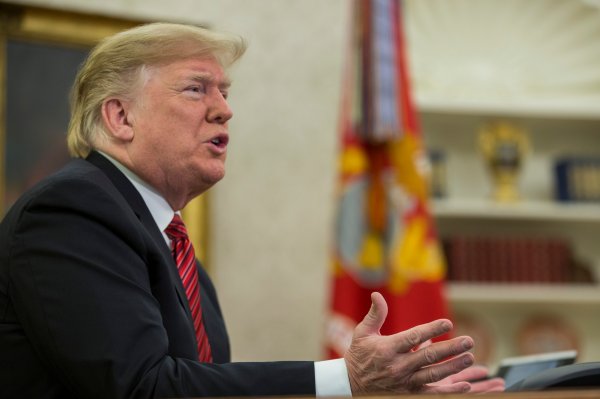 Federal Workers Do Not Support Shutdown, Unions Say
Next Up: Editor's Pick