Snow and Rain Across the U.S. Could Impact Post-Christmas Travel for Millions

Heavy snow and rainstorms moving through much of the United States are predicted to create dangerous road conditions for millions of travelers heading out after Christmas.

A winter storm affecting the West and parts of the Midwest is bringing snow to the Central and Northern Plains and the upper midwest as it moves through the area on Thursday and into Friday, the National Weather Service said.

Blizzard warnings are in effect for portions of North Dakota, according to the NWS’s Grand Rapids center, and will remain until Friday morning. Up to 18 inches of snow is expected to cover the Southern Red River Valley area. Wind gusts are predicted to go as high as 50 mph.

The NWS has warned against traveling under such weather conditions.

“Travel will be nearly impossible,” the blizzard warning issued by the NWS says. “Widespread blowing snow will significantly reduce visibility.”

Severe weather is also spreading toward the Southeast after thunderstorms rolled through parts of Texas Thursday. Further storms are expected in Louisiana, Arkansas, western Alabama and Mississippi, AccuWeather reports. There are also chances of isolated thunderstorms in parts of Georgia, the Carolinas and Florida on Friday.

The post-Christmas weather events are likely to impact travelers heading out after the holiday, AccuWeather forecaster Brett Edwards says.

“Based off the severe threat alone there are going to be a few million people who will be impacted,” Edwards says.

Travelers are warned to keep up to date with weather forecasts and to know what the weather will be like at their destination, Edwards says. If roads are packed with snow, drivers should stay put. 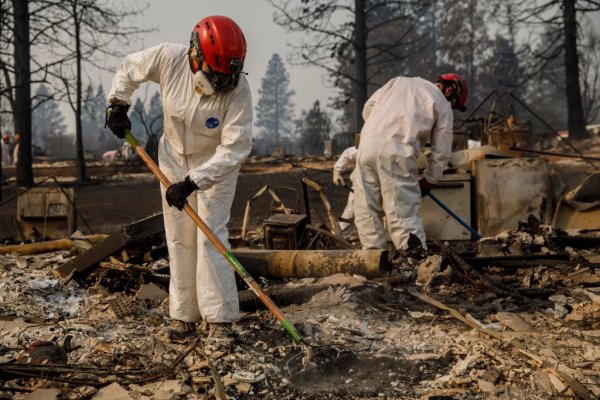 Why Officials Miscounted the Victims of the Camp Fire
Next Up: Editor's Pick