Protests have erupted in Tunisia this week after a journalist died after setting fire to himself, calling for revolt amid the country’s struggling economic situation and high unemployment rate. The death of Abderrazak Zorgui, 32, on Monday sparked protests in Kasserine, a town in the country’s west, leading to violent clashes and concern across the country, the Associated Press reports.

Police reportedly fired teargas on demonstrators that blocked roads and threw stones at the authorities. A spokesman for Tunisia’s Interior Ministry said Tuesday that six police officers had been injured and several people were arrested during Monday night’s protests. Similar unrest was reported elsewhere in protests Tuesday night. Here’s what to know about the latest unrest in the North African nation, which became the epicenter of the Arab Spring in December 2010.

What Caused the Protests

Zorgui, a television correspondent, posted a video online before his death describing his frustration at high unemployment rates in Tunisia and his disappointment eight years on from the Arab Spring revolution. “For the sons of Kasserine who have no means of subsistence, today I start a revolution. I am going to set myself on fire,” Zorgi said in the video, according to Agence France-Presse.

A provincial town, Kasserine’s high poverty levels and threats from nearby extremist groups are emblematic of Tunisia’s socio-economic problems, with the country’s wider economic growth remaining weak since the revolution. Kasserine is also the hometown of another prominent protester, Husseini Kalai, who survived his own self-immolation attempt in January 2011 and was profiled by TIME nearly five years later.

Zorgui’s death has sparked widespread anger, with the Tunisian National Journalists’ Union calling for action in response to his death and laying partial culpability for the tragedy at the hands of the state through its failure to tackle corruption. His form of suicide through self-immolation was also reminiscent of the death of Mohammed Bouazizi, a Tunisian street vendor who set himself alight in the town of Sidi Bouzid in December 2010 in protest caused by systematic unfair treatment he received from local police. Bouazizi’s death would go on to spark nationwide protests in outrage at the wider lack of opportunity, transparency and democracy in Tunisia and proved to be the catalyst for the Arab Spring, a series of anti-government protests that rippled across more than a dozen countries in the region and resulted in the ouster of four governments.

Tunisia has been upheld as one of the few countries to emerge from the Arab Spring having undergone a democratic transition, with free and fair parliamentary elections taking place in 2011 and 2014 as well as presidential elections in 2014. A collection of Tunisian advocates for democracy even won the Nobel Peace Prize in 2015 for their work to maintain stability in the country in the years following the Arab Spring.

But recent events show just how fragile that stability is. Municipal elections in mid-2018 offset the balance of the country’s governing coalition, setting off a power struggle within the ruling party of President Béji Caïd Essebsi and the suspension of Prime Minister Youssef Chahed. Tensions between the two men have also been fueled in part by the rapid rise within their Nidaa Tounes party of the president’s son, Hafedh Béji Caïd Essebsi, particularly in the lead-up to presidential elections slated for late 2019.

Essebsi also recently announced an end to the long-standing partnership between Nidaa Tounes and the powerful Islamist Ennahda party, who hold the majority of parliamentary seats. Analysts have noted that Nidaa Tounes has not delivered significant reform but a conservative transition, displaying little real legislative power and facing accusations of nepotism along the way.

The Letdown of the Arab Spring

Amid this political turmoil, voter turnout at the polls has decreased. Observers also note that numbers and frequency of street protests are on the rise, based on dissatisfaction at the broken promises of the revolution, as Zorgui voiced before his death.

High profile terrorist attacks rocked the country in 2015 and hurt its lucrative tourism industry. Unemployment remains high at over 15% (higher than the period immediately before the Arab Spring), according to Bloomberg. Inflation hit its highest level in 28 years in June rising to 7.8.%. While the government is facing pressure from the International Monetary Fund to shrink its public sector, it faces opposing resistance from unions, civil servants and young people concerned about the social costs of these reforms.

With youth unemployment hitting 36% last year amid a stagnant economy and a political environment plagued by infighting, the frustrations and anger of the younger generations in particular in Tunisia is not dissimilar to the pre-revolution days, palpable in the multiple strikes, street protests and demonstrations held over the past year. Reports have suggested that some protesters are seeking to create Tunisia’s own version of the “gilet jaunes,” or “yellow jackets,” movement that has swept France in recent weeks.

In 2011, TIME named “The Protester” as the annual Person of the Year, calling fruit vendor Bouazizi’s death “the final straw” in Tunisia. As Zorgui was buried in Kasserine on Tuesday before the evening’s protests, the full impact of his death isn’t yet clear, but the promises of the revolution in Tunisia remain unfulfilled for many. 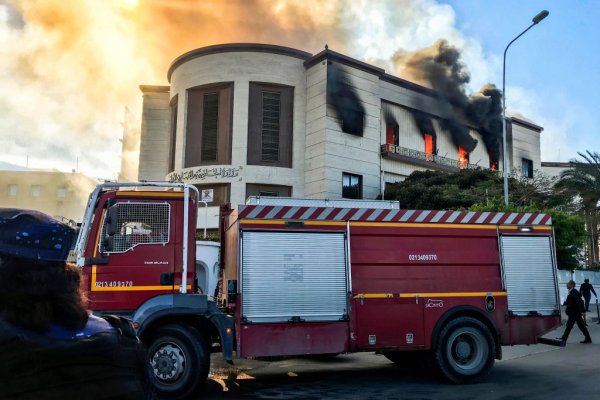 IS Claims Suicide Attack on Libya's Foreign Ministry
Next Up: Editor's Pick