The Creepy Trailer for Jordan Peele's New Film Us Is Here

The spooky trailer for Jordan Peele’s newest work, Us, is out, showing a family vacation that turns terrifying when a group of shadowy figures goes on the attack.

The trailer shows the Wilson family heading to a beach vacation in Northern California. While things are peaceful at first, they go awry after the Wilsons come under attack from the suspicious figures. Known as The Tethered, the scary figures end up being doppelgängers of the whole family — leading to some chill-inducing confusion.

The film, which stars Lupita Nyong’o and Winston Duke, is the second horror installment from Peele, who took home an Academy Award last year for directing Get Out.

The Us trailer, which features the Wilsons coming face to face with the terrifying figures who eerily look like them, prompted funny online reactions as people joked through their fear about facing a doppelgänger.

“I think the main idea that went into writing this film is that we’re our own worst enemy, and that idea created this monster, The Tethered,” Peele told Entertainment Weekly about the film. 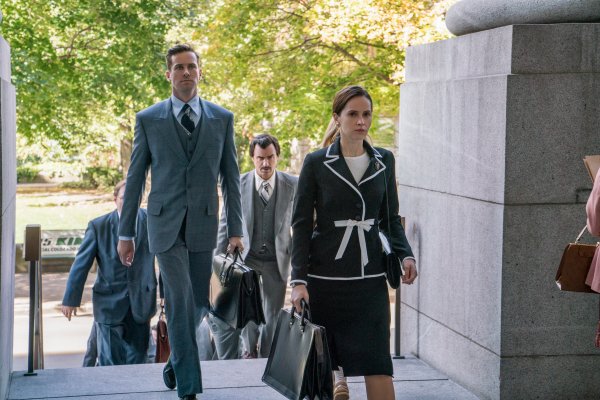 The 'On the Basis of Sex' Story Wasn't the Only Time Ruth Bader Ginsburg Used Cases About Men to Argue for Women’s Equality
Next Up: Editor's Pick