The Government Will Now Be Shut Down Through Christmas

Less than 24 hours after portions of the federal government shut down at midnight over a funding fight for the wall along the U.S.-Mexico border, the Senate closed up shop until Dec. 27. No deal, it appeared, would happen until after Christmas.

“I am glad that productive discussions are continuing,” Senate Majority Leader Mitch McConnell said on the Senate floor Saturday. “When those negotiations produce a solution that is acceptable to all parties – which means 60 votes in the Senate, a majority in the House and a presidential signature – at that point we will take it up on the Senate floor.”

The Republican-led House, Republican-led Senate and Republican-held White House remain locked in a standoff over funding for the border wall that President Donald Trump has demanded. The sticking point is Trump’s insistence on $5 billion for the wall. The President says he will reject any spending package that lacks it.

Negotiations on this point have been ongoing since Friday, but aides from both sides of the aisle told TIME earlier on Saturday that an imminent compromise was not looking likely. This prediction was compounded by the lunch President Trump hosted Saturday for lawmakers at the White House. Missing from the guest list was leadership from either party, who are most key to negotiating a deal.

A shutdown seemed inevitable by Friday evening, after the Senate voted to advance House-passed legislation that includes the funding—a procedural vote designed to allow negotiations to continue. Senate Republican Leader Mitch McConnell, visibly frustrated and wearing a “Senate Cranky Coalition” button affixed to his lapel, emerged on the chamber floor to announce that leaders of both parties agreed the Senate did not have the votes to pass the House measure and would not act again until House and Senate leaders could hash out an agreement with the White House.

The Senate’s rule requiring 60 votes means the spending measure will need Democratic votes. Senate aides from both parties told TIME the path forward was to amend the House version by stripping out its funding for the wall and replace those parts of the measure with new language. But there were few signs late Friday that House lawmakers would accept that, let alone the President, who according to White House officials was enjoying the drama.

The day began with glimmers of hope that an agreement to avert a partial shutdown could be reached. Vice President Mike Pence, incoming White House Chief of Staff Mick Mulvaney and senior adviser Jared Kushner requested a meeting with Senate minority leader Chuck Schumer. Following that meeting, the trio made their way to the House, where they met with Republican leaders. (They did not request a meeting with Speaker Designate Nancy Pelosi, according to her office).

The appearance of three of President Trump’s top advisers at the Capitol seemed to be a sign that a deal might be at hand. But the mood quickly turned sour again when it became clear Trump was not willing to budge.

Lawmakers and their aides professed frustration with the President as the shutdown approached. Many had already flown home for the holidays, assured that Trump would come around to their efforts from Wednesday. One Republican strategist close to McConnell’s team said lawmakers were uncharacteristically angry at Trump.

“He doesn’t get it, even after two years. He is never going to make Mitch McConnell do something Mitch McConnell doesn’t want to do. It’s a co-equal branch of government,” the strategist said. “Someone needs to tell the President that this doesn’t get any easier next year, when Democrats will have the majority in the House, and they’re not the compromising kind.”

The impasse has been long in the making. For weeks, Congress has grappled with the question of how to pass seven outstanding appropriations bills. Six are essentially agreed upon; the standoff has been over funding for the Department of Homeland Security, which encompasses border security. Democrats, whose votes Republicans need, have balked at any number higher than the $1.6 billion agreed upon earlier this year. (That number would not go towards an actual wall, but security measures and a fence).

Republican Senate leadership, sensing Trump’s demand was a non-starter, brought forth a resolution Wednesday that would fund the government at its current levels through February 8. They assumed the President was on board. But a faction of conservative lawmakers and pundits were not pleased, and made sure to let President Trump know exactly how they felt.

“Mr. President, we’re going to back you up. If you veto this bill we’ll be there. But more importantly the American people will be there. They’ll be there to support you,” Freedom Caucus Chairman Mark Meadows, who was leading the lawmakers in opposition, said on the House floor Wednesday night.

Meadows had the President’s ear. Trump promptly said he would veto any legislation that did not have his $5 billion. On Thursday evening, the House delivered on his wishes. But as senators from both parties have said all along, it lacks the support to pass the upper chamber.

“The key here is we got to get clarity from the President about what his priorities are and then get some sort of consensus with the minority leader on how to get it done,” said Sen. Thom Tillis, a North Carolina Republican.

The White House offered little help as the shutdown approached. At a briefing on Tuesday, press secretary Sarah Huckabee Sanders offered vagaries. “We’ll see what the Senate does,” she said.

Now the Senate has kicked the matter back to White House. What Trump does next is an open question. As the Senators were making their way to the floor to listen to McConnell speak, the President was at the White House tweeting out illustrations of a spiky steel wall. A short time later, he was back on Twitter blaming Democrats for a shutdown he recently said he was happy to own. 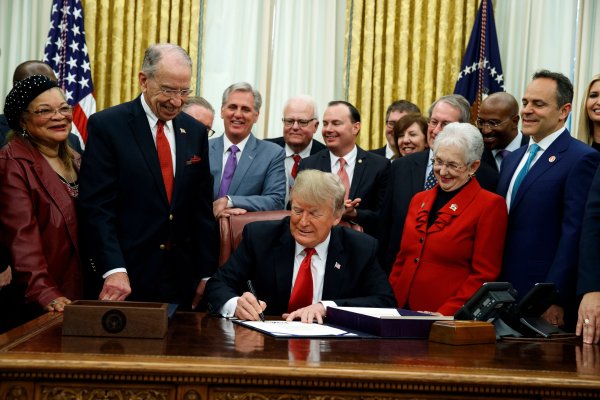 The Inside Story of How Prison Reform Got Done
Next Up: Editor's Pick