Where Donald Trump's Trade War Is Headed in 2019

President Donald Trump ended last year with a trade cliffhanger, leaving nearly all of his major disputes on the issue unresolved and everyone guessing about if — and how — they will wrap up in 2019.

The stakes are high. Economic growth slowed in the third quarter and the stock market experienced a sharp decline in the finals months of 2018, two metrics that Trump has repeatedly bragged about during the first two years of his presidency.

The biggest challenge to a win on trade may be the sheer number of conflicts. The Administration faces a self-imposed March deadline to agree to a deal with China that would stop the imposition of new tariffs. Congress needs to approve a trade deal negotiated by the Trump administration to replace NAFTA. And in the fall the Administration opened up new negotiations with Japan while floating the idea of starting trade talks with the United Kingdom.

“They have the capacity to be dealing with one major thing and maybe one minor thing in an intensive way,” says David Dollar, an economist at the Brookings Institution. “The fact that there are so many trade issues definitely puts pressure on the administrative bureaucracy.”

By the far the biggest issue on everyone’s radar is the long-running dispute with China over everything from the country’s trade deficit with the U.S. to its weak protections for intellectual property. President Trump and his Chinese counterpart Xi Jinping announced a pause in trade tensions in early December with a 90-day window to come to a comprehensive agreement that will halt further escalation, including higher tariffs on $200 billion in Chinese goods that Trump had originally planned to implement in January.

Trump tweeted in late December that an agreement “is moving along very well” and “if made, it will be very comprehensive, covering all subjects, areas and points of dispute.” But the details of a comprehensive agreement that actually settles all points of dispute are hard to imagine. The Trump administration’s complaints are wide-ranging, and many of them cut to the core of Chinese long-term growth strategy, including the country’s funding of industrial programs. The selection of U.S. Trade Representative Robert Lighthizer, a China hardliner, to lead the negotiations signaled a tough road ahead for a potential deal.

China has consistently expressed a willingness to negotiate, even offering some significant concessions like reducing restrictions for U.S. automakers, the country is unlikely to give into many of Trump’s demands. “No one is in a position to dictate to the Chinese people what should or should not be done,” Xi said in a Dec. 18 speech. The Wall Street Journal reported in late December that negotiators were discussing a deal that would increase U.S. exports and soften some Chinese regulations.

The situation has left the business community in an awkward position. Observers widely agree that China has engaged in unfair and even illegal practices, but many hope for a return to short-term stability even if it means kicking some of thornier issues down the road.

With that in mind, Trump might work out a deal to protect intellectual property while China leaves its bigger industrial polices intact. Trump might even accept a deal in which China agrees to buy more U.S. goods and reduce the trade deficit, an arrangement economists say is virtually meaningless but would at least halt escalating tariffs.

“He is not at all encumbered in terms of declaring victory and saying we won,” says Ron Kirk, the chief trade negotiator under Barack Obama.

Conflicts with foreign governments lie at the heart of Trump’s trade disputes, but he also faces significant challenges to his trade agenda at home.

Most obviously, his replacement to NAFTA — dubbed the United States–Mexico–Canada Agreement, or USMCA — faces an uphill battle to win Congressional approval. The deal is more of an update than a major overall to NAFTA, but many Democrats have insisted on changes before they will approve it and may be reluctant to give Trump a win.

Trump also faces the simmering angst of many of his most ardent supporters in rural areas whose local economies have suffered as China shifts its agricultural purchases away from the U.S. in retaliation for tariffs on hundreds of billions of goods Trump has imposed on the country.

That anger could worsen, not just if China clamps down but also as a result of the Trans Pacific Partnership, which took effect Dec. 30. Trump pulled the U.S. out of the deal before early in his presidency, and now the 11 Pacific countries that remain in the pact will enjoy reduced tariffs and lower barriers to entering each other’s markets. “For some specific sectors, suddenly the U.S. is really going to be at a disadvantage,” says Dollar.

At the same time, Wall Street types who have held their nose at many of Trump’s foibles because of the booming economy may turn their backs if things change. Economic growth slowed significantly in the third quarter and the stock market dipped in the final months of 2018.

Of course, all of this comes against a backdrop of a presidency that always seems to be teetering on the brink of a crisis. And Trump has at times responded to one crisis by stoking another.

Most notably, the investigation by Robert Mueller into Russian interference in the 2016 presidential election and potential obstruction of justice seems to be nearing its conclusion. “If the results of the investigation are seriously bad for Trump,” said Asia Society President Kevin Rudd, a former prime minister of Australia, in a speech on U.S.-China relations. “That certainly would be an ‘X factor.’”

How such an “X factor” or any of the others on a seemingly endless list would play into Trump’s trade decision is anyone’s guess. 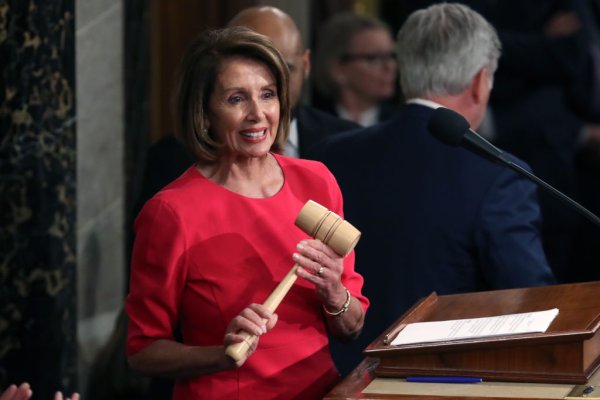 How Democrats Took Aim at Trump With New House Rules
Next Up: Editor's Pick