We all know the controversy around “Baby, It’s Cold Outside.” But Miley Cyrus is here to make us rethink that other Christmas classic tune, “Santa Baby.” In her appearance on The Tonight Show Starring Jimmy Fallon on Thursday night, Cyrus decided to rework the lyrics of “Santa Baby” and turn the old-fashioned song into an emancipated ode to independent womanhood — no gifts from Santa required.

“Santa baby, I hear you’ve got some presents for me, Miley,” she began, traditionally enough. But things take a turn: “Santa baby, I don’t need any fancy jewelry, not me,” she insists, forcing Fallon — who was about to present her with a necklace — to rethink his strategy. “Listen, Santa, to what I say: a girl’s best friend is equal pay,” she goes on, “So stop interrupting me when I talk, and don’t text me pictures of your —.”

Besides calling out the “Santa” in the song for his dated insistence on keeping a woman imprisoned in a golden cage of capitalist goodies, Cyrus also appears to have had enough with workplace harassment, too, requesting any resident “dirtbag” to “put away the chimney tonight.”

Here are her updated lyrics:

By the end, musician Mark Ronson — who features Cyrus on his new song “Nothing Breaks Like a Heart” — and Fallon have joined in with Cyrus on the new chorus. Maybe this version will catch on. 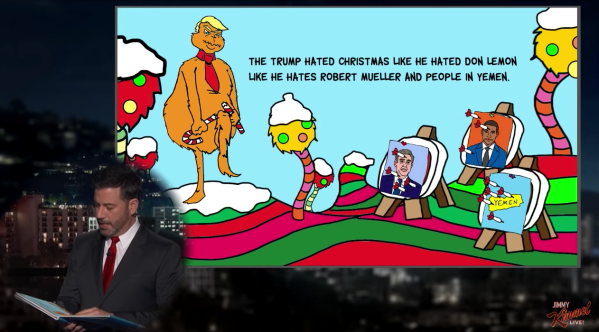 Jimmy Kimmel Wrote a Trump-Themed Christmas Book for Kids
Next Up: Editor's Pick