One recent article from Al-Arabiya, a state-sponsored Saudi news agency, reported that Tlaib and Ilhan Omar were part of a “Political Islamist Movement.” Youm7, an Egyptian news outlet, followed the same tired trope, linking me falsely to the Muslim Brotherhood. Instead of being proud of our strides forward, they echoed the bigotry of white supremacists to demonize us.

These are fascinating, if troubling, political times.

And strange political times make for stranger bedfellows — uniting America’s extreme right and the Middle Eastern despots they say they despise. To be sure, Representatives-elect Ilhan Omar and Rashida Tlaib and I have vociferously supported the women’s movement, LGBTQIA+ rights, religious freedom and the firm separation of church and state. After all, each of us knows what it’s like to be targeted for who we are. But our very existence as progressive Muslim-Americans aspiring to democratically elected leadership in our country strikes at the heart of arguments Middle Eastern despots and Rightwing extremists have both been peddling for a long time: We show that Muslims are wholly capable of pluralism and democracy.

When Representatives-elect Omar and Tlaib take their oaths of office next year, Tlaib in her traditional Palestinian gown, they will swear an oath to protect and defend the Constitution of the United States — and do so with their right hands on a Qur’an. They will have been elected by diverse communities in Midwestern states, the vast majorities of whom are not Muslim, and will represent people from all walks of life. There are few greater testaments to the inclusive power of our democracy. And that is why Muslim-American political leaders are seen as such a threat, to Middle Eastern despots and white nationalists alike.

These attacks are nothing new. They came thick and fast throughout the 2018 campaign season, fueled by President Donald Trump’s moral prevarications. In my case, they insinuated that because of my Egyptian heritage there must be family connections to the Muslim Brotherhood, or that any Muslim-American running for high office was committing Taqiyya — a common alt-right conspiracy theory that Muslims are encouraged to lie to achieve power. In fact, I had never come across that word until I read it in a Facebook chain post about me during my campaign. The death threats that followed were so common that I was forced to travel with a bodyguard for the last eight months of my campaign. In fact, just a few weeks ago, a law enforcement officer knocked on my family’s door to inform us that I had been a potential target of Cesar Sayoc, the Trump supporter suspected of attempting a bombing spree against prominent Democrats in October. I have a 1-year-old daughter who lives behind that door.

But when we started to hear those same conspiracy theories coming from state-sponsored media in the Middle East, we were admittedly surprised. Why would leaders of majority-Muslim countries attack Muslim-American candidates in the United States? Instead of being proud of our strides forward, they echoed the bigotry of white supremacists to demonize us.

Tragically, despots in countries like Egypt and Saudi Arabia, like white supremacists, rely on the broken argument that certain kinds of people just aren’t capable of democracy. These despots have leveraged that argument against their own people for generations to seize and strangle power. The murder of Jamal Khashoggi at the hands of a Saudi death squad ordered, according to a bipartisan group of Senators, by that country’s despot — who himself has enjoyed President Trump’s continued support — remind us where the real axis of evil sits.

My father was the first in his family to immigrate, trading dictatorship in Egypt for democracy in America. There is no way I could have even dreamed of aspiring to leadership in Egypt had he stayed. As an American, I was able to run for my state’s highest office. That’s because there are no democratically elected leaders in Egypt at all. That fact is what is so threatening to despotic regimes in the Middle East. We show the people who have suffered under the yoke of these despots for generations that it is not them, but their leaders, who are deficient.

Worse, we threaten the careful alliances they’ve built with the U.S. government. Over the past 40 years, the Egyptian regime has been backed by $47 billion in military aid and $24 billion economic assistance. If we are serious about protecting and defending democracy, we should stop subsidizing foreign dictators abroad.

Sadly, there are some here who would deny Muslim-Americans the right to belong to “we, the people,” just like there are despots abroad who deny their people the right to choose their leaders. Yet, Ilhan, Rashida and I — in daring to run for office without apologizing for who we are or asking permission — are showing them that, in fact, our democracy is big enough. And we are big enough for it. 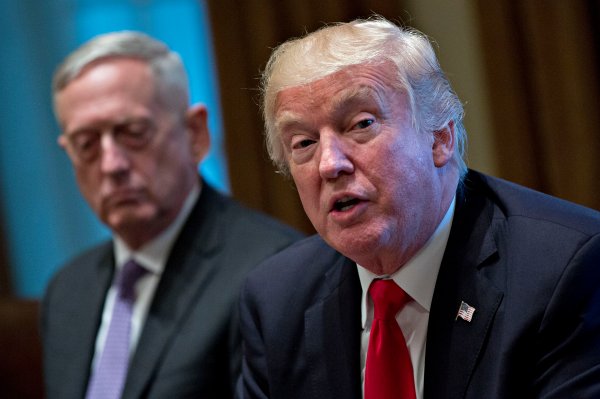 My Friend Jim Mattis Is Gone From the Pentagon, and the U.S. Is One Step Closer to Chaos
Next Up: Editor's Pick