My Friend Jim Mattis Is Gone From the Pentagon, and the U.S. Is One Step Closer to Chaos

U.S. President Donald Trump speaks at a briefing with senior military leaders including Defense Secretary Jim Mattis (L) in the Cabinet Room of the White House October 5, 2017 in Washington, D.C.
Pool—Getty Images
Ideas
By James Stavridis
Admiral Stavridis (Ret.), a TIME Contributing Editor, was the 16th Supreme Allied Commander at NATO and is an Operating Executive at The Carlyle Group. His new book is 2034: A Novel of the Next World War. His previous nonfiction book was Sailing True North: Ten Admirals and the Voyage of Character

His call sign was never “Mad Dog.” That was but one of the many, many things President Donald Trump got wrong about retired four-star Marine general and Secretary of Defense Jim Mattis.

His actual call sign is, believe it or not, “CHAOS” – an appropriate sobriquet for all that is unfolding in the White House and Washington these days. “CHAOS” is actually an acronym meaning “Colonel Has An Outstanding Solution,” an affectionate reference to his mastery of the battlefield from his days as a senior colonel.

Mattis, whom I’ve known for decades, certainly took his share of hills from America’s enemies, in the Persian Gulf War and in Afghanistan and Iraq. But even he eventually hit a hill even he couldn’t take – his mercurial Commander-in-Chief.

It was not just President Trump’s decision to withdraw from Syria, a foolish choice probably launched to change the daily media cycle. This was only the latest in a cascade of questionable events that had the Secretary of Defense doing little but playing defense in the domestic realm, trying to explain his capricious Commander-in-Chief’s uninformed comments and bad decisions.

The string is long and undistinguished: the denigration of NATO, an institution Mattis correctly reveres; Trump’s response to the white supremacist rally in Charlottesville as Mattis led the most racially integrated organization in government; the fictitious migrant caravan “invasion” and the deployment of nearly 6,000 troops to string barb wire over Thanksgiving and Christmas; the major drawdown of U.S. forces from Afghanistan; the support to an implacable foe of the United States, Vladimir Putin, at a shameful press conference in Helsinki; and the seemingly endless stories of moral failure from the Commander-in-Chief himself.

All of it eventually stripped the insulation from Mattis’ wires. By staying on in Trump’s cabinet and facing policy choices he could not support pragmatically or philosophically, he knew he would complete his journey from a guard rail to an enabler.

So what happens now? Hopefully the President will pick someone who will continue to push back when he makes bad decisions. The new Secretary of Defense must be able to explain, again and again, that our greatest strength in the world is our network of alliances, partners and friends – as Mattis did, one last time, in his resignation letter.

He or she will need the fortitude to help the President understand why we have troops in Korea, Japan, Europe and the Middle East and how that is good value for the dollars invested. It will be a difficult task.

Three lines of defense remain in the wake of Mattis’ departure. The first is the U.S. Congress, which has the power of the purse and must confirm any Defense Secretary. Perhaps a strong Senator like Lindsey Graham or Tom Cotton, or a past Senator like Dan Coats (the current Director of National Intelligence) can step up and make it clear that no sycophants are allowed.

Second, the government professionals – the diplomats at State and the military officers at Defense – must stand and deliver, speaking truth to power. It will be an uncomfortable time for our ambassadors, admirals and generals, but we’ve never needed them more.

And finally, the media has an ongoing and critical role to play in delivering the full truth of facts and clear-eyed analysis to the public. None of this will be easy, and Mattis is indeed hard to replace; but no one is irreplaceable.

Mattis and I bonded over a love of books, and often traded recommendations when he was a one-star general and I was a Navy captain in the Pentagon. His tastes ran to the classics and tomes of war, mine to fiction and the lessons a well-crafted novel can impart.

In particular, we both admired the WWI novel by C.S. Forester, The General, that tells the tragic story of a hapless British general on the battlefield in the Great War who manages to kill tens of thousands of troops needlessly. The book vividly illustrates the consequences of feckless, uncaring leadership and what happens when the tactical is substituted for the strategic. In today’s America, sadly, it remains a cautionary tale.

The departure of Jim Mattis moves us closer to his real call-sign, “CHAOS,” than we have been since those terrible wars of the 20th century. He will be missed. 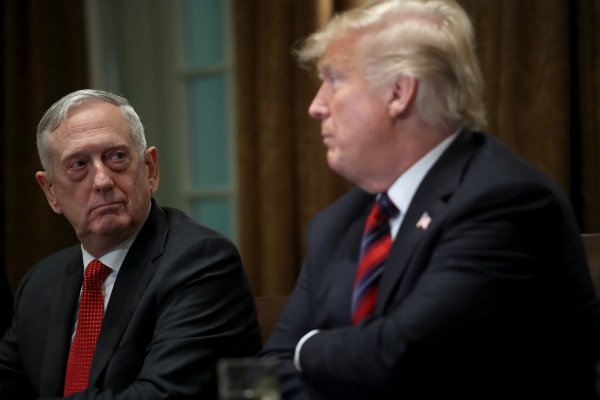 Mattis' Resignation Has Military Leaders Rattled
Next Up: Editor's Pick