Mattis Quit After Trump's Syria Pullout. Here Are All the Times He Publicly Split With the President

James Mattis will leave his post as President Donald Trump’s Secretary of Defense in February – a move that Trump billed in tweets Thursday night as a long-deserved retirement.

Mattis’ own letter of resignation – released by the Pentagon – seemed to indicate that the retired Marine general was actually being pushed out because he disagreed with Trump on policy issues.

“Because you have the right to have a Secretary of Defense whose views are better aligned with yours on these and other subjects, I believe it is right for me to step down from my position,” Mattis wrote.

The resignation came less than 48 hours after Trump abruptly announced plans to withdraw the more than 2,000 U.S. troops serving in Syria.

Mattis had publicly supported the U.S. military’s mission in Syria, saying in September, “We are in Syria right now to defeat ISIS and destroy the geographic caliphate, and make sure it doesn’t come back the moment we will turn our back. So there’s going to be a little while that we’ve got to work with the locals.”

On Thursday, Trump tweeted: “Why are we fighting for our enemy, Syria, by staying & killing ISIS for them….Time to focus on our Country.”

The disagreement over troops in Syria is just the latest in a series of public rifts between Mattis and Trump.

Though Trump once revered Mattis as “one of the most effective generals that we’ve had in many, many decades,” their relationship had clearly drifted in recent months. Trump went as far as saying he was “sort of a Democrat” in an October interview.

House Democratic Leader Nancy Pelosi told reporters late Thursday she was “shaken by the news” of Mattis’ resignation. In remarks shared on Twitter, she called Mattis “a comfort to many of us as a voice of stability in the Trump Administration,” adding that “All of us should be concerned at this time.”

Here are the other times Mattis publicly contradicted the Commander-in-Chief.

The Associated Press reported Thursday night that Trump is planning to order a dramatic reduction in the number of U.S. troops in Afghanistan, pulling up to half of the 14,000 U.S. forces out of the country after 17 years of war.

Mattis has argued for sending additional resources there to end the war and stabilize the country.

“We are going to stand with the 41 nations. The largest wartime coalition in modern history is the NATO-led campaign in Afghanistan,” Mattis said earlier this month. “The Taliban have made very clear that the lives of the Afghan people are of no interest to them. They know they cannot win at the ballot box.”

He added: “I would just tell you that if we leave, 20 odd of the most dangerous terrorist groups in the world centered in that region, and we walk out of there, then we know what will happen. Our intelligence services are very specific that we will be under attack in a number of years — a very few number of years.”

Troops at the U.S.-Mexico border

When the White House released a memo authorizing troops deployed to the U.S.-Mexico border to use lethal force, if necessary, against what Trump called an “invasion” of migrants, Mattis clarified that the troops wouldn’t even have firearms.

“They’re not even carrying guns, for Christ’s sake,” he said.

Mattis was on vacation during Trump’s surprise Twitter announcement, and had reportedly only been given one day’s notice of Trump’s intention to reverse the Obama-era decision allowing transgender people to openly serve.

In the months that followed, Mattis effectively slow-rolled implementation of Trump’s plan by establishing a panel of experts to recommend how the Department of Defense should proceed.

A day after Mattis told reporters there were “no plans at this time to suspend any more exercises” with South Korea, Trump tweeted that they would cease.

“The President believes that his relationship with Kim Jong Un is a very good and warm one,” Trump posted to his personal twitter account in third-person. “There is no reason at this time to be spending large amounts of money on joint U.S.-South Korea war games.”

Though he eventually offered support to Trump’s plan to establish a “Space Force,” Mattis initially broke with Trump on its creation as a separate branch in the military.

“I strongly urge Congress to reconsider the proposal of a separate service Space Corps,” Mattis wrote to lawmakers in July 2017. “I believe it is premature to add additional organizational and administrative tail to the Department at a time I am trying to reduce overhead.”

Mattis was also a firm believer in NATO’s power to preserve global peace. “If you didn’t have NATO, you would have to invent it,” Mattis said, according to reporting by veteran journalist Bob Woodward. Trump ceded to Mattis on the matter. “You can have your NATO,” Woodward reported Trump told Mattis, “but you become the rent collector.”

In his resignation letter, Mattis wrote: “While the U.S. remains the indispensable nation in the free world, we cannot protect our interests or serve that role effectively without maintaining strong alliances and showing respect to those allies.”

Mattis’ full letter of resignation can be read below: 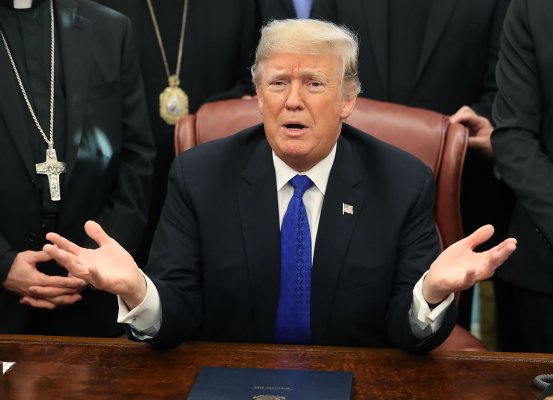 No One's Sure What Comes Next After Withdrawal From Syria
Next Up: Editor's Pick