With One Tweet, Trump May Have Given Assad a Path to Victory in Syria

As residents of Syria braced themselves for the first U.S. troops to withdraw from Syria, thousands of Kurds gathered near the headquarters of the U.S.-led coalition in the north of the country. They held photos of Kurdish fighters who died in battles with ISIS, as they marched toward the base in Jalabiya, near Kobane on Thursday.

For three years, the mostly Kurdish Syrian Democratic Forces (SDF) have been the loyal ground troops in the U.S. fight against ISIS in Syria. With the help of U.S. advisers, weapons and air strikes, the SDF have pushed ISIS out of most of the territory it once controlled, cornering them in a strip of land along the Iraqi border.

The war in Syria has allowed the Kurds to carve out an enclave of self-rule, amid the violence and chaos of the multi-pronged conflict. They have established a degree of autonomy, in that territory taken from ISIS and Kurdish areas in the north, with their own government institutions and security forces. Around 35 million Kurds live primarily in Turkey, Syria, Iraq and Iran and the ethnic group has long sought sovereignty.

But now, both progress against ISIS and Kurdish autonomy are at risk after President Donald Trump’s surprise decision on Wednesday to pull troops out of Syria—and that could allow President Bashar Assad to return rule in areas that have been out of government hands for years. The decision has left the Kurdish forces, who were essential in pushing out ISIS, feeling betrayed.

“At a time when we are having fierce battles… in the last strongholds of ISIS and fighting its sleeper cells,” the SDF said in a statement after Trump’s announcement, “the White House’s decision to withdraw from northern and eastern Syria will negatively affect the campaign against the terrorism.”

Thousands of ISIS fighters are thought to be still holed-up along the frontier between Syria and Iraq. Following Trump’s announcement, France and the U.K. cautioned that the fight against ISIS is not over.

Analysts also warn of the risks of a hasty withdrawal. Heiko Wimmen, director for Iraq, Syria and Lebanon for the International Crisis Group, says the SDF’s control of many areas taken from ISIS is fragile and that thousands of militants may have given up their weapons and military fatigues, mixing among civilians, but “they can have arms tomorrow if they want to.”

Militants aren’t the only group to benefit from such a move. Turkey is also likely to gain a freer hand in Syria. Ankara has been clear it would not allow Kurdish sovereignty on its southern border, having spent decades fighting its own war against Kurdish separatists in Turkish. But until now, the U.S. forces standing beside the Kurdish fighters in Syria, were a deterrent for Turkey and President Recep Tayyip Erdoğan’s desire to crush the Kurdish dream of sovereignty with military action.

Now, the U.S.’s Kurdish allies are facing a mounting Turkish offensive as the U.S. pulls out its 2,000-odd troops from the country.

“This basically means you throw the Kurds under the bus,” says Wimmen. Indeed, on Thursday, Turkey’s Defense Minister told a state news agency that the Kurdish fighters would be “buried in their ditches” and pledged military operations soon.

Before supporting the SDF against ISIS, the U.S. spent billions of dollars supporting opposition groups fighting Assad, though it eventually abandoned the program. Withdrawing now from Syria will create a vacuum that could allow Assad to retake swaths of territory, possibly without firing a single bullet.

While SDF fighters are capable and well-trained, the Kurdish militia are no match for the Turkish army or Syrian forces backed by Russia and Iran. Without support from Washington, they will struggle to keep ISIS at bay. That leaves the Kurds in a difficult position, facing the dual threat of both ISIS and Turkey. Despite declarations that they will defend the area, they are more likely to try to strike a deal and avoid a full-blown military confrontation that would cause the death and displacement of thousands of Kurds.

Ultimately, the Kurds may choose the loss of autonomy to Damascus over war with Turkey and begrudgingly accept the return of Syrian government rule. Assad’s forces could retake the expansive territory currently under Kurdish control, extending the power and influence of the Syrian regime, and its Russian and Iranian allies, and facilitating an Iranian presence in the strategic border area with Iraq. That undermines Washington’s earlier goal in Syria, which —as well as fighting ISIS — was to curb Iranian influence.

“The only thing the Kurds can do,” Wimmen says, “is throw themselves into the arms of the regime.”

Sihanouk Dibo, a member of the SDF’s political wing, says the Kurds are open to talks with the Damascus government. “Terrorism is our common enemy,” Dibo says, “and there will be no solution to the Syrian crisis without negotiations with the regime in Damascus. This has been our policy.”

But with the U.S. troops gone, the Kurds have little leverage to negotiate, as they face a Turkish offensive on the territory they they now control.

“Either way, the area is likely to fall back into [Assad’s] lap,” says Wimmen, “potentially without even a fight.” 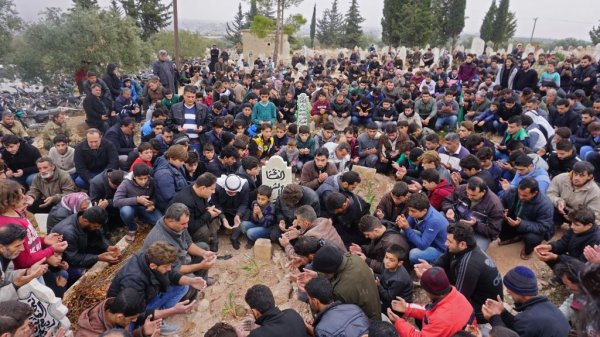 'Ideas Cannot Be Killed With Weapons.' Why the Assassination of Syria's Most Prominent Citizen Journalist Matters
Next Up: Editor's Pick