How the 14,000 Migrant Children in Federal Custody Will Spend Christmas

A boy from Honduras watches a movie at a detention facility run by the U.S. Border Patrol in McAllen, Tex. on Sept. 8, 2014.
John Moore—Getty Images
By Gina Martinez

More than 14,000 migrant toddlers, children and teens will spend the Christmas in U.S. government detention and processing centers across the country.

Some children detained by the federal government will be spending their first Christmas away from home and thousands of unaccompanied children will spend the holidays without families, migrant rights groups say.

A young girl receives a toy at a toy drive held outside the Immigration and Customs Enforcement offices in Mirimar, Florida.
Photo courtesy Maria Asuncion Bilbao

U.S. Immigration and Customs Enforcement (ICE) and Department of Health and Human Services (HHS) officials told TIME that they will accommodate families and children over the holidays with traditional celebrations and religious services.

However, rigid visitor restrictions make the actual conditions inside government facilities difficult to independently verify. Some advocates question the rosy picture of holiday cheer that the government agencies say they are providing to children.

In addition to federal agencies plans’ for the holidays, many advocacy groups are working – often under heavy restrictions – to give gifts, Christmas cards and messages of hope to the migrant children and families in federal custody.

ICE spokesperson Danielle Bennett told TIME that the agency regularly provides religious services for families with children. ICE facilities do not house unaccompanied children. Bennett said that over this Christmas holiday, ICE will have special Christmas-themed events for families in their “family residential centers.”

“To celebrate Christmas, ICE Family Residential Centers (FRCs) have incorporated a number of special events, extra religious services, and treats for children that are currently housed in family residential centers,” Bennett said in a statement. “Each family residential center has been adorned with Christmas decorations, especially in housing and medical units, the cafeteria and in common spaces. Each facility has a Christmas tree. One facility’s school put on a Christmas performance. Facilities have increased arts and crafts times, so children can make paper ornaments, cards and Christmas gifts.”

The Office Refugee Resettlement, which is overseen by HHS, is responsible for sheltering unaccompanied minors in detention centers across the country. HHS officials tell TIME that for the holidays, unaccompanied migrant children shelters will provide “age-appropriate activities, including holiday-themed arts and crafts and Christmas TV specials and movies.”

HHS shared the Christmas schedule line up at the West Texas Detention Facility in Tornillo, Texas, which started on Dec. 16 and will continue on until Christmas Day. HHS said workers are providing the children, the vast majority of whom are of Latin American decent, with traditional food and celebrations from their culture. HHS said the treats include bunuelos and torrejas; Guatemalan Christmas deserts, and champurrado, calientitos, Mexican hot chocolate and warm punch.

For Christmas Day, HHS said the West Texas Detention Facility will host a “Special Christmas Brunch and Gifts” event where children will be served a special meal followed by a Christmas prayer by a “Spiritual Team.” The children are scheduled to receive gifts and a card and HHS officials said there will be a parade.

ICE told TIME that further details about festivities were not available as nearly all public affairs employees in the department were furloughed by the partial government shutdown.

The number of arrests at the border has increased exponentially, with more than 25,000 arrests of people who crossed the border as a family unit in November alone. According to Customs and Border Protection, that is nearly four times more arrests than the the same period last year. The people crossing the border are primarily families and children from Guatemala, El Salvador and Honduras seeking asylum or protection.

Additionally, as the number of migrant minors has increased, so has the amount of time they have spent in the 137 shelters across the U.S. According to federal data, the average time in unaccompanied minors spent in shelters was 40 days in 2016. In 2018, the average is 59 days.

Here are what some charities, churches and officials are doing for the detained kids this Christmas:

On Wednesday, Circle of Protection, a Miami-based immigrant advocacy group, held a toy giveaway outside of the Miramar ICE field office in Florida. The group raised nearly $2,500 for grocery gift cards and toys for the children.

ICE’s Miramar field office is one of dozens around the country, where ICE conducts investigative and enforcement activities. It is also where ICE holds monthly check-in sessions for immigrants who have open asylum cases. Throughout the year, Circle of Protection offers food and water to immigrants waiting outside in the Florida heat for their scheduled appointments – sometimes for hours.

Maria Asuncion Bilbao, a volunteer with Circle of Protection, says the group decided to spread holiday cheer to show immigrants that they are cared for.

“What we want to do is help those most vulnerable,” she said. “We said it’s almost Christmas and it’s the right time to do something sweet for these people, who we have seen be treated like animals. These people left their countries looking for a better life, to escape poverty. We wanted to show them that we care, and that not everyone’s sentiments align with the Trump Administration’s.”

Bilbao says there were at least 70 children who showed up on Wednesday to receive toys and over 100 gift cards for parents.

“It was nice seeing kids who just crossed the border,” she says. “And they were so grateful! they didn’t care which toy they got. The parents were telling us it was the first toy they had in months, because they left everything behind.”

Bilbao says the facility has been a source of frustration for advocates.

“We have seen bad treatment towards the people,” she says. “Every day there are tons of appointments they have people wait outside for hours, in the rain or in the heat. I’ve seen people pass out from the heat or get nosebleeds.”

Non-profit advocacy group “El Refugio” helps immigrants detained at Georgia’s Stewart Detention Center, which currently houses up to 1,800 detainees, stay in contact with their loved ones. The group opened a hospitality house offering meals and lodging at no cost to families as well, as helping transport individuals to the ICE detention center to see their loved ones inside.

Loyda Paz Perez, a member of the group’s Board of Directors, says over the holidays, El Refugio is doing all it can to keep spirits up for migrant children and families – despite limited contact with detained immigrants. According to Perez, members of the group are not allowed to have physical contact with families. They are limited to speaking to detained immigrants through a glass on a phone for an hour. She says one way to keep Christmas spirits high is by sending families letters written by volunteers.

“They are able to receive letters, so one thing we are doing for the holidays is sending Christmas-related letters,” Perez says. “The letters contain messages of hope. For some people this is their first Christmas detained, and we know there are some spending their second year in Stewart.”

Perez is skeptical about whether operators are holding Christmas festivities for the children inside – though she cannot actually enter the holding areas to verify the ICE’s assertions.

“Usually there is nothing there,” she says. “This time of the year can be really hard. Most of these families are used to celebrating the holiday together at home and now we’re helping loved ones visit them in the facility – and so they can be tense trips. We know it’s frustrating and we will stick with them and encourage them and in any way we can.”

Just outside of El, Paso, 2,800 minors are staying in a tent shelter in Tornillo, Texas. For the holidays, state Sen. José Rodríguez organized a “Gift for Good” drive, which collected nearly 3,000 soccer balls and thousands of handwritten cards for detained children.

Rodríguez says the drive was coordinated with camp operator, BCSF. After getting some traction through social media, the drive drew attention from people across the country, who wished to donate as well.

According to Rodríguez, until the soccer ball drive children in the tent shelter had not been allowed visitors, gifts of any kind or even hugs. He says he was even able to get permission to collect handmade holiday cards, which was more difficult because each card had to be checked to make sure it complied with guidelines. In total, Rodríguez says students from across El Paso County submitted more than 4,000 cards for the detained children.

The Democrat says his office and volunteers will distribute the soccer balls and holiday cards on Christmas Day. Rodriguez says he hopes the gift can ease the burden of being “separated from family and friends and without appropriate educational and mental health services.”

“I’m grateful for the overwhelming support that we received. It reflects the spirit and generosity of our border community and our country,” Rodríguez said in a statement. “I hope these gifts give them a little something to smile about during the holidays and let them know they are not alone.”

The original version of this story misstated the name of the facility which Danielle Bennett referenced. They are Family Residential Centers (FRCs), not Family Restoration Centers. 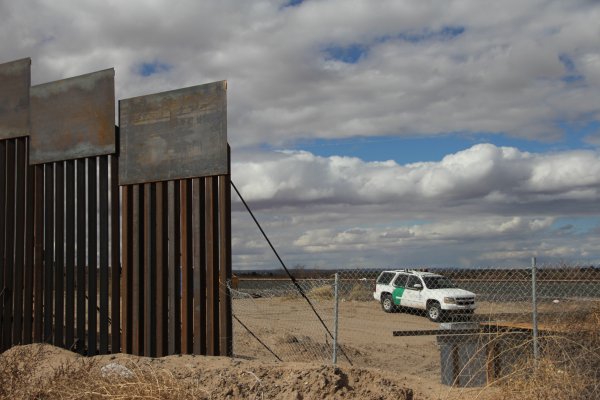