These Were the Biggest Icons and Stars We Lost in 2018

The world said goodbye to timeless icons, beloved entertainers and influential politicians in 2018.

Stephen Hawking, a legendary physicist known to be one of the most brilliant minds of his time, died at his home in Cambridge, England at the age of 76, after living with ALS for more than five decades.

Aretha Franklin—the Queen of Soul and first woman to be inducted into the Rock and Roll Hall of Fame—died in August. She was also 76.

The year saw the passing of legendary writers Tom Wolfe, an acclaimed journalist and satirist who rose to prominence in the 1960s; Philip Roth, a fiction writer who won the Pulitzer Prize for his 1997 novel American Pastoral; and William Goldman, a novelist turned screenwriter who penned Academy Award winning screenplays for Butch Cassidy and the Sundance Kid and All the President’s Men.

The world mourned the loss of two icons who brought beloved characters to life on the page and to the screen; Stan Lee and Penny Marshall. Lee co-created the world of Marvel Comics, with superheroes including Spider-Man and The Hulk. Marshall portrayed Laverne DeFazio on the classic TV sitcom Laverne & Shirley and directed beloved films like Big and A League of Their Own.

We also lost major figures in American politics like John McCain, a Vietnam POW who served as the U.S. Senator from Arizona for over three decades up until his death in August. Barbara Bush, a former First Lady, died in April at the age of 92. Her husband of 73 years, former President George H.W. Bush, passed away seven months later. He was 94.

Above, catch a glimpse into the lives of some of those we lost in 2018. 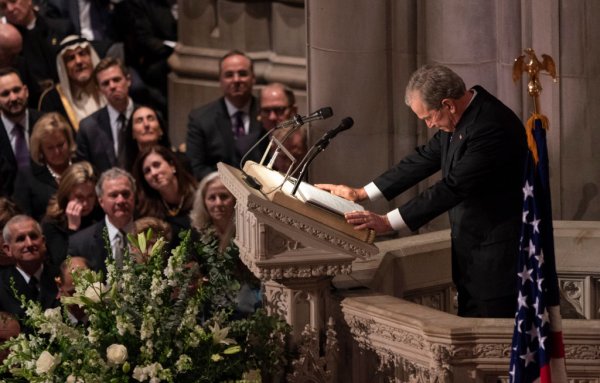 'Brightest of a Thousand Points of Light'
Next Up: Editor's Pick