The U.S. Will Withdraw From Syria. No One's Sure What Comes Next

President Donald Trump has directed the U.S. military to withdraw all 2,200 American ground troops from Syria within 30 days, marking a swift end to the four-year-long conflict against ISIS there. “We have defeated ISIS in Syria, my only reason for being there during the Trump Presidency,” Trump said Wednesday on Twitter.

But pulling out of the war-ravaged country is a lot easier said than done. U.S. military commanders are now scampering to devise a strategy to execute the massive logistical challenge of pulling out troops, equipment and heavy weapons within the desired time frame, Administration officials told TIME. In addition, the mission needs to be carried out in a way that doesn’t completely abandon U.S. military allies nor imperil the hard-fought strategic gains made against ISIS since 2014, officials say.

The Pentagon is wrestling with questions on how the pullout can be handled, including whether the U.S. military should attempt to retake the thousands of weapons it has distributed among Syrian ground forces; whether the American military equipment that’s scattered over a half-dozen military bases in Syria can be pulled out within 30 days or should be destroyed in-place; and what the U.S. should do with the Kurdish fighters and a 79-nation international coalition aimed at eradicating ISIS.

“There are a lot of unanswered questions that need to be resolved quickly,” one official told TIME. “It’s not yet clear how this withdrawal will be handled.”

It’s not that America’s counterterrorism experts want to stay mired in the Syrian civil war indefinitely. But the challenge long-vexing them and their counterparts in the Obama Administration, is how to pull out of the country without allowing the last remaining ISIS fighters to reform and become a threat again, just as they did when the U.S. pulled out of Iraq.

American officials broke the news to allies on Tuesday, officials said, but they weren’t given much time to prepare for the public fallout, or the battlefield implications, they would face with the announcement of a U.S. withdrawal. Less than 24 hours later, White House spokeswoman Sarah Huckabee Sanders announced that the Administration “started the process of returning U.S. troops home from Syria as we transition to the next phase of the campaign.”

Allies weren’t the only ones caught by surprise. The White House declaration is a departure from the previously stated positions of senior Pentagon and State Department officials. Brett McGurk, the State Department’s special envoy for the global effort to defeat the Islamic State, said Dec. 11 — just eight days before Trump’s announcement: “It would be reckless if we were just to say, ‘well, the physical caliphate is defeated, so we can just leave now.'” Gen. Joseph Dunford, the Chairman of the Joint Chiefs of Staff, said Dec. 6 that U.S. troops and allies had trained just 20% of 40,000 local forces needed to deter ISIS from making a comeback. “With regard to stabilization, we have a long way to go,” he said.

ISIS has lost roughly 99% of its territory in Iraq and Syria, but it still poses a security threat. Not only has the group expanded and established cells around the world, it routinely mounts attacks in Syria, despite Trump’s declaration that ISIS has been defeated. In August, the Pentagon published inspector general report, which said the U.S. military estimates that ISIS has as many as 30,000 fighters in Iraq and Syria. A United Nations report published that same month made a similar assessment.

Although ISIS is no longer in control of any major city in Iraq or Syria, the fighting is not over completely. The U.S.-led military coalition continues to battle daily against the remaining ISIS fighters holed up in a stretch of desert straddling the Iraq-Syria border. Warplanes launched 378 airstrikes against the group in Iraq and Syria — nearly all of them in Syria — between Dec. 9 and 15. ISIS targets were hit with 251 strikes the prior week, according to coalition data.

“We believe that that remaining pocket can be eliminated both by our own guys, but then also by regional and partner forces that are local to it,” a senior Administration official told reporters Wednesday. “You could use that as an excuse to remain in perpetuity and have all sorts of other reasons to be there creep in. But we’ve judged, and the President has judged, that the purpose for which those troops were put into Syria has been accomplished to the point that they can reposition.”

James Stavridis, retired U.S. Navy admiral who commanded all NATO forces from 2009 to 2013, said on Twitter that pulling out from Syria was a “big mistake,” comparing it to “walking away from a forest that is still smoldering underfoot.”

Several Republican lawmakers expressed similar frustration with the decision. Republican Sen. Lindsey Graham of South Carolina, a member of the Armed Services Committee, said on Twitter that Trump’s withdrawal plan was a huge “Obama-like mistake.” He later added: “I fear it will lead to devastating consequences for our nation, the region, and throughout the world.”

Republican Sen. Ben Sasse of Nebraska, who’s also a member of the committee, went further in a statement: “The President’s generals have no idea where this weak decision came from: They believe the high-fiving winners today are Iran, ISIS, and Hezbollah. … A lot of American allies will be slaughtered if this retreat is implemented.”

American Special Operations forces inside Syria coordinate with local opposition fighters called the Syrian Democratic Forces, an alliance of mostly Kurdish and Arab fighters. The Kurds have been critical to the U.S. efforts to coordinate among dozens of armed groups that were trying to overthrow the government of President Bashar Assad, fight ISIS, and battle one another all at the same time.

Operating in the northeast part of the country, American advisers steadily began to build up the Syrian Democratic Forces by training and arming them. The center of this effort is a remote base in eastern Syria located at Al Tanf, where the borders of Jordan, Syria and Iraq meet. When the U.S. pulls out from that location, analysts say it will encourage Assad to reclaim control over his country. Backed by Iranian military aid and Russian airpower, Assad has nearly defeated the Islamist-dominated rebel groups spawned in the chaos of Syria’s 2011 revolution.

The insurgents still hold scraps of territory, but they have no hope of challenging Assad’s hold on power. As a result, Iran and Russia have vastly extended influence and reach inside Syria.

John Bolton, Trump’s national security adviser, said in September that countering Iran’s influence in Syria was a major policy goal. He pledged that American forces would stay inside the country as a counterweight to allowing Iran from establishing a stronghold in the region. “We’re not going to leave as long as Iranian troops are outside Iranian borders, and that includes Iranian proxies and militias,” Bolton said.

American warplanes began bombing ISIS in Syria on Sept. 22, 2014, a month after the group released a grisly video depicting the beheading of American journalist James Foley. Since then, the U.S.-led coalition has launched some 17,000 airstrikes in the country.

The U.S. and its allies sent small amount of ground forces since then, trying to build up Syrian allies’ military and police forces sufficient to defend their territory without outside help. Despite the impending pullout, the U.S. will remain involved in the worldwide fight against ISIS throughout the Middle East, Africa and Asia for years to come.

Just how the President’s decision will play out remains something of a mystery. The White House hosted a phone call with reporters Wednesday in which a senior administration official, who spoke on the condition of anonymity, was unable to answer several straightforward questions on how the troop withdrawal would take place and what the Administration’s Syria policy would be in the future. 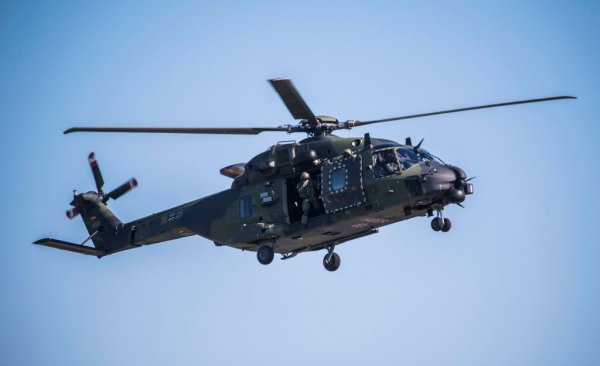 The $31 Billion King Stallion Helicopter Is the Latest Military Program That Won't Be Combat-Ready on Time
Next Up: Editor's Pick