This week marks the 40th anniversary of former Chinese leader Deng Xiaoping’s decision to “reform and open up” China to the rest of the world. To celebrate the occasion, Chinese President Xi Jinping delivered a major, 80-minute address on Dec.18 to political and business leaders in Beijing.

The speech was expected to include the announcement of new economic reforms, or at least tweaks to existing policies, designed in part to help China address its domestic economic weakness. Instead, Xi struck a defiant tone, saying there are no “arrogant teachers who are able to teach the Chinese people what to do” and failing to announce any new economic initiatives.

Because this was the first real opportunity for Xi to recalibrate Chinese economic policy following the delicate trade truce he reached with U.S. president Donald Trump at the G20 in Buenos Aires a few weeks ago. And it’s not like Trump is the only challenge China’s economy is facing at the moment; China’s economy has begun slowing down, leading to decreased consumer confidence and genuine questions about the resilience of the Chinese economy.

The anniversary gave Xi the opportunity to frame reforms as a tribute to Deng’s influential economic adjustments, and not a surrender to U.S. demands or an admission to economic missteps by the Chinese government. Instead, he defended the policies currently in place and lauded the Communist Party’s stewardship. For those hoping for a Chinese climbdown, this speech failed to deliver the goods.

Xi’s speech will help buck up his domestic audience, but he is walking a very fine line with the U.S. China hawks in the Trump administration will be unhappy with his refusal to address reforms as negotiations continue ahead of a March 1 deadline for a U.S.-China trade deal. A breakthrough by then is unlikely, though you can expect an extension as both Xi and Trump have political incentives to keep talks alive.

But make no mistake—things will only get more challenging for Xi from here on in. The recent arrest of Huawei’s CFO in Canada and the decision of foreign governments and entities to ban Huawei equipment from their 5G plans (especially the recent decision of Deutsche Telekom to reevaluate its use of 5G equipment, which would effectively keep China out of the next-gen European market) signals that Western allies of the U.S. share Washington’s security concerns over Chinese IP and technology policy.

That means we are getting ever-closer to two internets, one Western and one Chinese. And as soon as the two sides are distinctly drawn, the possibility of a technology cold war emerging become much more real.

“Every step in the course of reform and opening up is not easy, and we will face all kinds of risks and challenges, even some unimaginably rough waves.” Xi Jinping

That Trump is China’s number one concern. Beijing understands that it can deal with Trump by delivering him the type of relatively small wins he’s hungry to take credit for, much like North Korea’s Kim Jong-un has done. Viewed from that lens, waiting out Trump is a fully logical approach for Beijing to take.

But Beijing’s real worry is that China hawks in the West—of which there are plenty—will use Trump as a foil to advance their agenda to box in China. The headlines are about Trump, but the real story has less to do with him than the bigger question of how the West will handle China’s rise.

At this moment, China is much more worried about muddling through than it is about liberalizing and attracting more foreign investment. Which makes sense—“reform and open up” doesn’t really work when you’re the world’s ascending economic power.

Getting caught between a trade war with the U.S. and your own domestic concerns is a first-world problem. Looks like China’s finally made it. 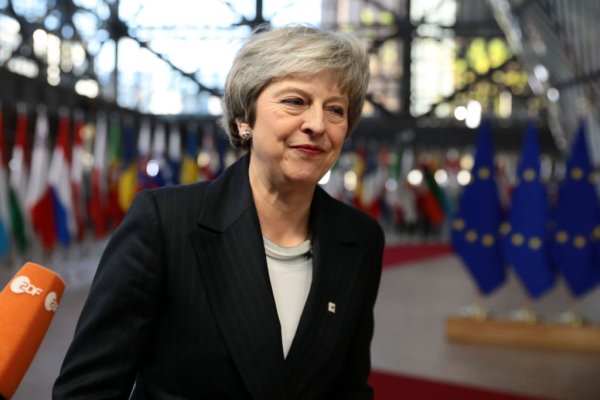 The Quick Read on Theresa May's Pyrrhic Victory in a No-Confidence Vote
Next Up: Editor's Pick