The Bipartisan Criminal-Justice Bill Will Affect Thousands of Prisoners. Here's How Their Lives Will Change

A criminal justice reform effort known as the First Step Act is just one step — a signature from President Donald Trump — away from becoming law and changing the lives of an estimated 30% of the federal prison population over the next decade.

The House voted Thursday to pass the Senate’s revisions by 358-36. And although Congress also faces the threat of a partial government shutdown, Trump has signaled his willingness to sign the bill.

It is estimated that some 53,000 of the 181,000 inmates currently imprisoned in the federal system in the U.S. would be affected over the next 10 years, according to the Congressional Budget Office. The bill would not cover state jails and prisons, which account for the majority of the country’s prison population. The U.S. has the worlds highest total prison population with over 2.1 million people incarcerated.

Since the First Step Act was introduced earlier this year, it has earned the support of both Democrats and Republicans, though some Democrats say the bill doesn’t do enough in regards to sentencing laws that disproportionately affect minorities. The legislation has also gotten support from groups like the American Civil Liberties Union and the Fraternal Order of Police.

Senior White House official and Trump’s son-in-law Jared Kushner pushed for the bill to be passed before the end of the year, according to the New York Times, advocacy that stems in part from his father having served 14 months in federal prison for tax evasion, witness tampering and making illegal donations.

The bill would give judges greater latitude in sentencing and allow inmates who earn “good-time credit” by participating in counseling programs to be released earlier. The bill also includes anti-recidivism programs while inmates are still in prison, bans pregnant prisoners from being shackled and most juveniles from being held in solitary confinement.

Despite running on a “tough on crime” platform, Trump has supported the bill, which will cut sentences in the future.

Here’s everything to know about the First Step Act:

It would ease mandatory minimum sentences

The bill will give federal judges discretion to skirt mandatory minimum sentencing guidelines for more people, according to the Marshall Project, a nonprofit news organization covering the U.S. criminal justice system. Currently, judges use what is known as a “safety valve” for nonviolent drug offenders with no prior criminal background. But the bill will allow it to expand to include people with limited criminal histories. An additional 2,000 people each year would be eligible for exemption from mandatory sentences if the bill passes, according to estimates by the Congressional Budget Office.

It will also lighten automatic sentences for serious violent and drug charges by five to 15 years, the Marshall Project said. The bill would amend the “three strikes” rule, which currently carries a life sentence for three or more convictions that include serious violent felonies or drug trafficking. Now it would instead trigger a 25-year sentence.

“It seems like a minimum step, but getting five years of your life, being able to know you have an opportunity, we believe that changes a lot within the prison system,” Michael Deegan-Mccree, policy associate at Cut 50, a prison reform advocacy group that worked to get the First Step Act bill passed says. “It’s also something members on both sides of the aisle have said they are very interested in coming back to and possibly even lessening mandatory minimums even more, and so thats something were really happy about.”

The bill would also ease sentences for serious drug felonies that currently result in automatic 20-year minimum sentences, down to 15 years. It would also amend an automatic trigger that adds 25 years if a defendant was convicted of two or more violent or trafficking charges while holding a gun. That trigger would now only apply to people with prior records of similar offenses.

It increases credits for good behavior

The First Step Act would allow for the increase the amount of “good time credits,” which reduce prison time for good behavior, inmates can earn. Prisoners can earn up to 54 “good time credits” a year, which can reduce sentences by months depending on time served. “Good time” credits can be taken away from prisoners if they have an infraction while inside a facility.

Deegan-Mccree says the “good time credit” amendment in the bill was added to adjust the amount of credit prisoners get. “What happened is that this was not calculated correctly and people were actually getting 47 days of good time credit,” he says. “So what this bill does is that it fixes that and gives people the appropriate amount of time that people were supposed to get in the first place.”

This will retroactively apply to everyone in federal prison who has earned credit for good behavior, allowing some men and women to leave prison soon after the bill passes, according to firststep.org.

In addition to the fixed “good time credit,” inmates will also have the opportunity to earn credits through the First Step Act. Inmates earn “earned time credits” by taking part in programs once they are brought in to a facility. Inmates are evaluated and put into a “risk category” based on a previous infraction, usually the crime that they were imprisoned for. An independent review committee along with the Attorney General’s office and the Bureau of Prisons that looks at persons needs.

“Does a person need addiction services? Parenting classes? We’re going to put together a package for every individual person and put them in a program,” Deegan-Mccree says. “So every 30 days that they are successfully running that program for themselves, we’re going to give them 10 days of earned time back so that when they are locked down in re-evaluation if they are able to obtain the status of low or minimal risk.”

Inmates will then have the opportunity to exchange those earned credits after two years of non-infraction and if they are down to low or minimal level risk, they can trade in that time and serve the rest of their sentence either in home confinement or a halfway house.

The bill will also adds incentives for inmates to participate in programs, including “earned time credits.” The bill would allow for 10 days in prerelease custody for every 30 days of successful participation, with no cap on the prerelease credit that can be earned, according to estimates by the Marshall Act.

Other incentives include more time on the phone and longer visitation hours, increased commissary spending, access to email and consideration of transfer.

The bill would allow inmates to be incarcerated within 500 driving miles from their families. This would remove the burden of families having to make long distance trips, which can be costly. The shorter distance makes it more likely they will be visited by family members, making it easier for them to reintegrate successfully into society. The bill also will allow lower-level offenders to serve home confinement as opposed to serving their time in prison.

The First Step Act will also ban the shackling of pregnant women, and extending that to three months after her pregnancy. Deegan-Mccree says that Cut 50 has worked on a statewide campaign called “dignity for incarcerated women” and on of its primary focuses has been to help bring about such a ban.

“What we’ve done in certain states is try to ban that horrific practice of shackling a woman to a bed while she is giving birth to her baby,” he says. “Studies show that trauma goes straight to the baby. So we tried to pass stand alone bill that dealt with this portion but we thought the First Step Act is all about prison reform and that it was important that this language made it into the bill as well.”

“It was very important that people saw that this was happening, there were many people who didn’t know this practice existed and to bring that to light through policy and say this is not okay to treat human beings like that is extremely important to us.”

The bill will also require that BOP provide free sanitary napkins and tampons to incarcerated women.

Deegan-Mccree says he has worked with women who said that while in federal prison they were only allotted 12 tampons and pads a week and in order to get extra female hygiene products they would have to show male correctional officers that the products were used up.

“The dignity is stripped from women,” he says. “There isn’t anything more demeaning. It is extremely important not just for women but for men as well to understand what women have to go through when they���re incarcerated. Today in our mass incarceration age, women are the highest growing rate of people getting locked up. This has a huge impact on whole communities because women are usually primary caretakers of community. People need to understand that this affects all of us.” 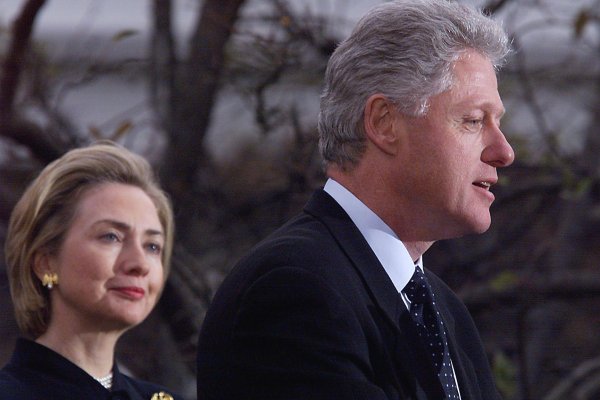 Here's How the Process of Impeachment Actually Works—And What Happened Last Time the U.S. Went Down That Road
Next Up: Editor's Pick