This image of 7-year-old Amal Hussain in October drew global attention to the humanitarian crisis caused by the Saudi-led war in Yemen, where the U.N. says 14 million could be on the edge of starvation. On Nov. 1, Amal’s family said she had died in a refugee camp.
Tyler Hicks—The New York Times/Redux
Ideas
By Tawakkol Karman
Tawakkol Karman won the Nobel Peace Prize in 2011. A Yemeni journalist and human rights advocate, she supported the Arab Spring uprisings and has become a vocal critic of both sides in the ongoing civil war in Yemen.

Entire families lie buried under the rubble in Sana’a, Taiz, Hoddaidah and elsewhere across Yemen. In almost every house, children cry out in suffering, while the outside world knows nothing of them.

But the world did learn of 7-year-old Amal Hussein, through her portrait, which so accurately portrays the state of Yemen. Hers is the face of a conflict that for four years has brought into question the entire future of the children of Yemen — or whether in fact, they will have a future at all.

Mere days after her photograph was published in the New York Times, capturing the attention of millions across the world, Amal became one of the millions of Yemeni children who are falling like dead autumn leaves after four years of starvation, shelling, landmines and epidemics of preventable diseases.

The international community is wholly responsible, yet seems unconcerned. This is because Yemen does not produce adequate amounts of oil and is therefore of no interest to the very outsiders whose neglect and inaction fuels the war.

Children do not understand the meaning of Iranian influence, nor of arms deals with oil-rich states such as Saudi Arabia and the United Arab Emirates — two countries that in particular believe that they have bought the silence of the international community and that they can do whatever they like.

Amal’s death highlighted this lack of basic integrity. Each party to the conflict — the Saudis, the Emiratis and the Houthi militia — rushed to deny that they had anything to do with her demise. The war criminals blamed each other.

I am a Yemeni, and I know well the sorrow that lies in every house and every heart. I’ve witnessed death militias enslave an entire people. I know very well what it means when the air forces of oil-rich countries destroy a poor country like Yemen, a civilization with roots in ancient history and a past of high dignity.

Yemen’s children and the millions of civilians whose lives have been severely disrupted by the war have the right to aspire to a real peace that would put an end to their suffering. They have the right to hope for a day when the state will be restored; where they can resume their life with security and stability. The children of Yemen have the right to attend school without fear, and to gaze into their parents’ faces without seeing any deprivation, destitution, fear and helplessness in their eyes.

Amal’s image represents a landmark event in the course of this seemingly endless war. Now that she has passed away, signs of an awakening conscience may eventually lead to sanctions against the criminals, regardless of their sociopolitical status. Criminals should not escape international accountability. If they continue to do so, millions more will follow Amal into early graves. 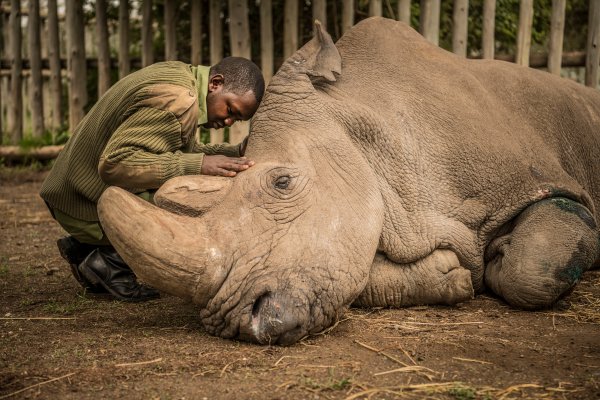 Why This Picture of the Last Male Northern White Rhino Was One of the Most Important Photos of 2018
Next Up: Editor's Pick