This is a clear reminder of just how strong the pressure is against anyone who seeks to listen to their conscience in Washington today.

It’s difficult to overstate just how isolated Senator Jeff Flake was in this moment. Every other Republican on the Judiciary Committee was determined to vote then for Judge Brett Kavanaugh and he was on his own in holding out for a weeklong delay for an FBI investigation. This shows in public the same dynamic that I saw in private, back in the anteroom when he first tapped me on the shoulder and said, “I want to talk for a minute.”

Within a few minutes, Senator Amy Klobuchar joined us, and then Senator John Cornyn and Senator Thom Tillis and Senator Lindsey Graham. It turned into a very heated exchange that went on for an hour and a half. Ultimately, Jeff said, “I just want to hear from him,” and pointed at me. There was no place to go, so the two of us went into a phone booth back in the anteroom.

I made a call to another Republican colleague to see if she would be willing to support him, and he made a call to leadership in the Department of Justice to make sure that they could deliver the kind of investigation we had in mind, on the timeline we had in mind. I got an up-close and personal exposure to what it was like for Jeff to be at the very center of intense lobbying.

I think this photograph captures the moment in time very well. You can see in Jeff’s face how much he is struggling. He’s a conservative. He’s always been a political conservative. He wanted a conservative majority on the Supreme Court. But he found Dr. Christine Blasey Ford’s testimony compelling, and he’s very concerned about the ways in which our country was being torn apart at this time.

The Senate will be a harder place without Senator Flake next year. It will have a lost a really important voice for principle in the Republican Party. 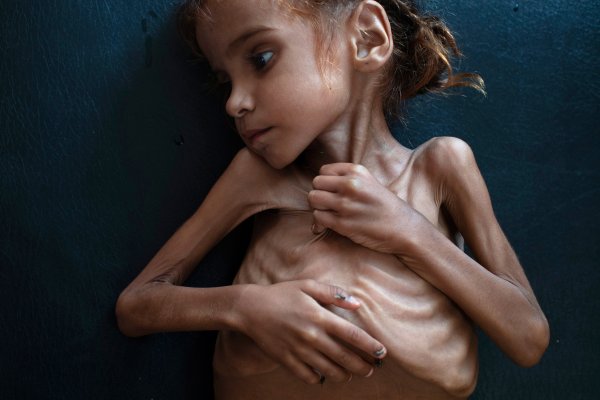 Why This Picture of a Girl Starving in Yemen Was One of the Most Important Photos of 2018
Next Up: Editor's Pick