Republican lawmakers, eager to escape a politically uncertain Washington and head home for the holidays, are not even trying to offer an argument that an increasingly likely government shutdown is anyone’s fault but President Donald Trump’s, even as they floated an alternative that Democrats immediately rejected.

After pushing the deadline back for funding portions of the government by two weeks – the original deadline was Dec. 7 – Congress and the White House have fewer than 96 hours to reach an agreement before the clock struck midnight on Friday and vast sections of the government run out of funding. And, so far, there does not even seem to be a semblance of a plan to do it.

“I wish I could give you some direction. I don’t really know what is [going to] happen,” Senate Majority Whip John Cornyn told reporters Monday evening.

“It is still up in flux. That’s all I can say,” said outgoing Republican Sen. Orrin Hatch.

The government needs to fund seven remaining appropriations bills, and six are close to completion, officials in both parties said. The outstanding negotiations on the seventh bill – the one that could lead to a partial shutdown – are grounded in a fight over a wall along the U.S.-Mexican border. Trump is insisting that the spending package includes $5 billion for border security, including his wall, as part of the Department of Homeland Security allocation.

Sen. Richard Shelby, who heads the Appropriations Committee that is writing the spending bill, has said that number is the President’s “red line” – a sentiment Trump only affirmed last week when he said he would be “proud” to shut down the government in the name of border security during a meeting with Democratic leaders Sen. Chuck Schumer and Rep. Nancy Pelosi. That declaration all but ended any attempts from Senate Majority Leader Mitch McConnell to give Trump cover or to shift blame to Democrats.

The possibility of a shutdown does not seem to be altering the President’s own holiday plans. He is still slated to depart for Palm Beach, Fla., on Friday, even though it means his Secret Service agents would not be immediately paid if a shutdown ensued. The same would be true for border agents and airport security screeners at one of the busiest travel times of the year. After past shutdowns, those workers were paid retroactively.

That has left Republican lawmakers fretting about the optics while armed with little more than hunches about how stubborn Trump may be on the border funding. While Republicans control both chambers of Congress for the next two and a half weeks, they need 60 votes in the Senate to pass a spending package. To clear that hurdle, the Senate needs the support of at least nine of their Democratic colleagues. While they may be able to peel off one or two, nine seems difficult, given the party appears unified in refusing Trump’s demand of $5 billion in spending for the wall.

Schumer and Pelosi offered Trump two alternatives for a spending bill: passing the six bipartisan appropriations bills and year-long funding for Homeland Security, which would only include $1.3 billion for the wall – or passing a year-long funding bill for all of the seven agencies. Neither included wall funding. They had heard nothing back from the White House as of Tuesday morning.

Pelosi told reporters on Tuesday that building a wall would be a waste of money and one her caucus will not support. Schumer, too, seemed to agree.

In a meeting in McConnell’s office, Republicans offered a $1.6 billion proposal for border security and another $1 billion in discretionary spending, which Trump could use to build some of the physical wall, according to a GOP leadership aide. Democrats scoffed and signaled it would reject the proposal out of hand.

Democratic officials are growing frustrated with their GOP colleagues. “They don’t seem to understand just how firmly we will reject this wall. They ran an election on the wall and they lost,” one senior Democratic aide said. “This is not an area where we will compromise.”

Behind the scenes, Republican aides were furious that Trump has, yet again, proven an unreliable governing partner. The President made the 2018 midterm elections a referendum on immigration, and voters decided to hand control of the House to Democrats. Republicans worry that Trump’s continued focus on immigration will continue to be a drag on the party heading into 2020, when the Senate map favors Democrats.

The entire dynamic means that, in a Congress where they control both chambers, Republican lawmakers have essentially been rendered powerless. They don’t want a shutdown, but are caught between the seemingly irreconcilable demands of a minority party they need to appease and a President whose exact demands they admit they have yet to fully discern.

“He wants a wall,” Cornyn said Tuesday when asked what he knew about what Trump wanted out of negotiations.

Later on Tuesday, White House press secretary Sarah Huckabee Sanders told reporters that the Administration was standing by to see what Congress could pass while looking for wall funding from other sources. The lack of clarity only added to Congressional frustration.

Republican Sen. John Thune felt the need to clarify when asked about the President’s current state of mind. “You mean on this issue?” he asked reporters Monday after acknowledging he was also in the dark. “He is very passionate about making sure he gets funding for border security and I don’t think that has changed.”

All of this has been fodder for Senate Democrats, who see political wisdom in their decision not to compromise. “It is shocking that Republicans haven’t engaged yet in this process, considering they control the presidency, the House and the Senate,” Schumer said on the Senate floor Monday. “What a symbol. What evidence of disarray.” 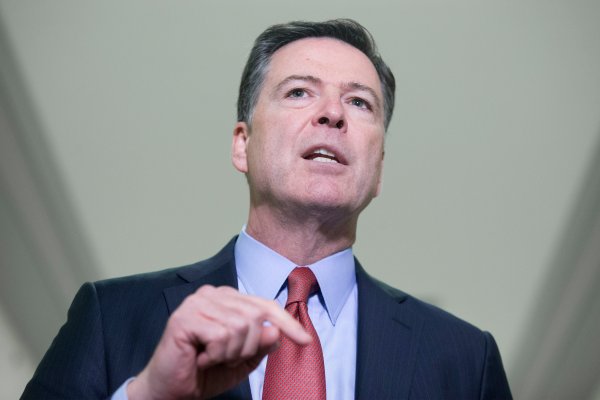 James Comey Slams the Republican Party After Second Interview on Capitol Hill
Next Up: Editor's Pick