Meghan Markle got into the holiday spirit by paying a special visit for caroling around a Christmas tree, arts and crafts and jokes.

The Duchess of Sussex, 37, popped into Brinsworth House, a Twickenham, England nursing and care home for English people retired from the entertainment industry, on Tuesday morning.

No stranger to show business, Meghan spent seven seasons in the role of an attorney on legal drama Suits, so she had plenty to talk about with the members of the home who used to be performers themselves.

During her visit, she said she’s feeling “very good” and “looking very pregnant” in videos captured by royal reporters.

Wearing a dress by Brock Collection and a coat by Soia and Kyo for the festivities, she got crafty with the other members at a table where members used construction paper to create paper ornament decorations to deck out the home. From the looks of this photo shared by the Daily Mail, she put her stellar calligraphy to use.

She also encountered some star power herself, and was treated to some cheerful songs.

She even said that she would like to be a member someday.

The Royal Variety Charity organization runs the home, and the name should sound familiar to royal fans. Prince Harry and Meghan made headlines when they went to the annual Royal Variety Performance in November. (The proceeds from the event go to support those retired from the entertainment industry, according to Kensington Palace.)

Meghan, who is expecting her first child with Prince Harry in the spring, is set to attend a Christmas lunch at Buckingham Palace Wednesday. She’s been out and about lately, making a surprise appearance at the British Fashion Awards on Monday night, showing up at London’s Royal Albert Hall to present an award to Clare Waight Keller, the artistic director of Givenchy who designed her wedding dress. 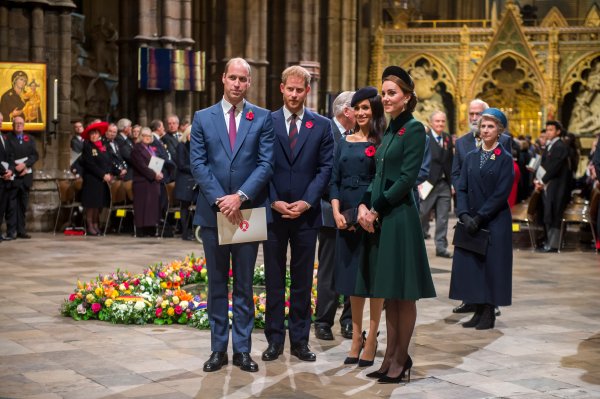 Joy to the World. The Adorable 2018 Royal Family Christmas Cards Are Here
Next Up: Editor's Pick