How Mary Poppins Has Evolved Over the Years

Author P.L. Travers was notoriously wary of signing over the rights to her famous children’s character, Mary Poppins, to Walt Disney. In fact, an entire movie—2013’s Saving Mr. Banks—was made about Disney’s overtures to the author. But eventually, as we now know, Travers caved.

Her trepidations were founded: Disney’s 1964 movie added a dose of sweetness to Mary Poppins to make her more palatable to children. But the rewrite proved popular: Mary Poppins became one of the most successful and beloved musicals in cinematic history.

Fifty-four years later, Mary Poppins is returning to Number 17 Cherry Tree Lane and to theaters. Emily Blunt takes up the mantle from the beloved Julie Andrews and makes the character her own. And Blunt’s version hues a bit closer to the original Mary: She’s a bit more caustic, though no less delightful.

Here’s how the enduring character has changed throughout her various reinventions.

All versions of Mary Poppins have this one thing in common: Mary is a mysterious nanny who emerges from the sky to implement some rules in an unruly household and, in the process, remind overburdened kids to just be kids.

The original Mary is plain, proper and somewhat vain. Travers described Mary Poppins as a woman who “never wastes time being nice.” Sometimes she could be so short with the children that they become confused and concerned when the nanny treats them with kindness.

The original Mary Poppins’ stern glances are not a cover for a bubbly interior. They are the point. Travers seemed to believe that a disciplined child was a happy child, and it was only under Mary Poppins’ rule that the children could learn to delight and indulge in fantasy. And the children do love Mary Poppins. She takes them on adventures, and they learn a new lesson in each chapter.

Those lessons were often borrowed from ancient myths. (Travers studied Zen Buddhism and often stuffed ancient fables inside stories about Depression-era children.) In the first book, for example, Mary Poppins takes the Banks children to the zoo, where the animals leave their cages and dance together, while the zookeepers are trapped behind bars. There, a snake speaks to the children about how all life is connected.

The first movie adheres to the basic format of the Mary Poppins story—a nanny is sent from above to care for the Banks children during the Depression era—but adds a dose of sugar to its protagonist. She is sunnier and has fewer flaws: She even tells Mr. Banks in her initial introduction that she is “never cross,” and when she measures herself, the measuring tape reads: “perfect in every single way.”

The musical numbers also brighten up the story. The Disney writers replace the talking snake parroting myths and morals with a dance number involving cartoon penguins. And where Mary Poppins’ adventures were more episodic in the books, the movie hues to a more coherent plot: Mary arrives on a mission to reconnect the Banks family and leaves when that job is complete.

Travers hated the Disney adaptation of her book series. She called it sentimental. She objected to changes in the plot, like turning Mrs. Banks into a suffragette or hinting at romantic feelings between Mary and Burt the chimney sweep.

But Travers’ biggest complaint was that Disney had fundamentally altered her main character from a harsh but fair ruler to a treacly caretaker. Travers’ Mary Poppins makes her entree into the story upon a harsh gust of wind that throws her into the house; Disney’s version floats down like an angel from heaven. Travers’ Mary suggests that the birds at St. Paul’s Cathedral should be cooked in a pie; Disney’s version sings about empathizing with the animals and feeding them.

Julie Andrews’ more maternal version of the character—and her impressive voice—won over the American public. Mary Poppins proved to be the biggest hit Walt Disney made during his lifetime—which is saying something, in a career as prolific as Disney’s. The film was a box-office smash and won four Oscars, including Best Actress for Andrews.

Mary Poppins Returns takes place some 20 years after the original film is set. Michael and Jane Banks are grown, and Michael has three kids of his own. His wife has died, and the bank is threatening to foreclose on the home Michael inherited from his own parents. None of the Banks pray for Mary Poppins, but in she blows anyway, ready to heal this grieving family. She hasn’t aged a day since they last saw her.

Blunt has said that she did not watch the original movie in preparation for the film, as she was determined to make the character her own. She does believe, however, that her version of Mary hues closer to Travers’ original character than to Andrews’ version. This new Mary is more sardonic and acerbic than her onscreen predecessor, especially when it comes to dealing with the children. In one scene, she scolds the children for their overactive imaginations in the bathtub before grinning widely and diving in with them to meet sea creatures below.

She is still a Disney character, of course: Blunt’s Mary flies, dances and sings the children a sweet lullaby about grieving for their mother. But she also rolls her eyes and unleashes sarcastic barbs at the Banks family if they fail to keep up with her wit. That attitude fits neatly into an age when irony rules and earnestness can seem disingenuous or outright cheesy. If the new Mary Poppins had been crafted to be too naive, she would hardly have been a fit for the moment. Her spoonful of sugar is all the sweeter exactly because Blunt acknowledges the bitter year that preceded her return. 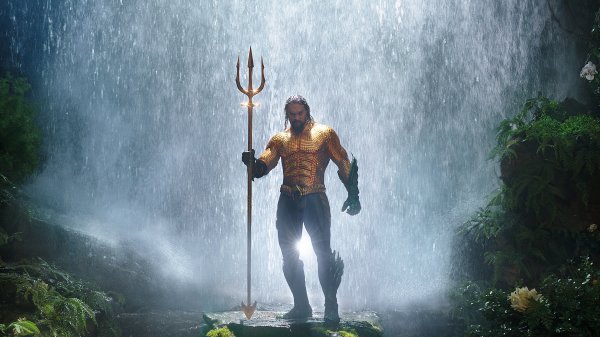 Aquaman May Be Silly But It’s Buoyed by Some Old-Fashioned Pulp Spirit
Next Up: Editor's Pick