The midseason finale of Saturday Night Live, hosted by Matt Damon, featured an unlikely sketch about the rock band Weezer. The sketch, which was aimed at a niche but vocal audience of music lovers, featured Damon and Leslie Jones as characters you are likely to run into in the bar area of a music festival or amped up on pour-over coffee at a party, vehemently arguing about the arc of Weezer’s musical career and when, exactly, it started to suck. Damon’s character insisted Weezer’s latest new work, the forthcoming Black Album, was great, while Jones’ character argued that Weezer’s first two albums were the only good ones and everything went downhill after bassist Matt Sharp left the band. “Real Weezer fans know that they haven’t had a good album since Pinkerton!” she said, causing music fans across the country to either start yelling at their TV or nodding in agreement.

On Sunday morning, the band’s frontman Rivers Cuomo took to Twitter to respond to the sketch with a resounding, “AAGGGGHHHHHHH“ and a mildly NSFW tweet. He wrote, “THEY HAD A WHOLE A– SKIT ABOUT WEEZER AND ME ON SATURDAY NIGHT LIVE AND IM ACTUALLY CRYING AAAGGGGHHHHHHH.”

Cuomo wasn’t the only one to weigh in on Twitter, as the sketch seemed to come to life on the social media site as fan’s tweeted out their own opinions on Weezer’s discography.

Watch the sketch and decide which side of the Weezer debate you end up on: 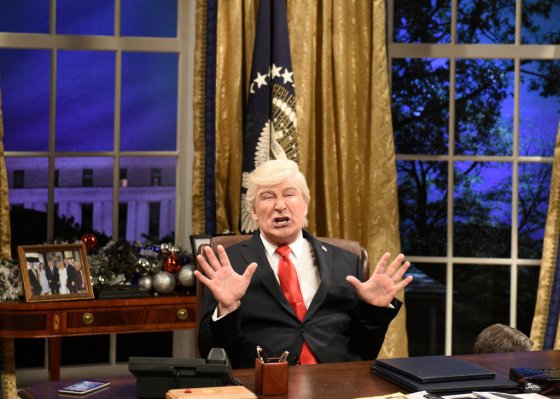 It's a Wonderful Life on SNL— Without Trump as President
Next Up: Editor's Pick