The head of the American Academy of Pediatrics (AAP) has called the death of a 7-year-old Guatemalan girl in Department of Homeland Security custody “preventable” and called for pediatricians to have oversight of detention centers that hold migrant children.

Dr. Colleen Kraft says the Dec. 8 death of Jackeline Caal is part of a broader failure to meet children’s basic needs that has characterized the Department of Homeland Security’s interaction with young people detained at the U.S.-Mexico border.

“We will not stop asking questions until we learn more about the circumstances of this girl’s death, so we can understand what happened to her and how to make sure it never happens again,” Kraft tells TIME.

Kraft says pediatricians who have visited DHS processing facilities that hold children have been alarmed by the conditions they have found. “These children are not given the basic needs of food and water and medical care,” she says.

Jackeline had not yet been booked into a processing facility when she went into apparent shock and died, according to DHS.

Kraft, the president of the AAP — which represents 67,000 pediatricians — says her organization has sent letters to DHS asking the government to improve the standards of care for migrant children in federal custody, but that the recommendations have “fallen on deaf ears.”

Jackeline died in intensive care at an El Paso hospital after she went into sepsis shock following about eight hours in DHS custody, DHS said. Customs and Border Protection agents had detained the girl and her father, 29-year-old Nery Caal, at about 9:15 p.m. local time on Dec. 6 as part of a group of 163 migrants near the remote Antelope Wells border crossing in New Mexico. Jackeline and her father were on a bus to a detention center when she began vomiting at about 5 a.m. on Dec. 7. When the bus arrived at the processing center 90 minutes later, EMTs treated her and revived her twice. She was then flown to Providence Children’s Hospital in Texas, where she died early Dec. 8 in intensive care.

A DHS statement called Jackeline’s death “tragic” and said her father told authorities she had not been able to consume food or water for several days prior to being detained. DHS said the father signed a form saying that neither he nor his daughter were ill at the time they were apprehended. DHS said all of the detained migrants were offered water and food and access to bathrooms.EMTs were waiting to treat Jackeline when her bus arrived at the detention center, DHS said.

In a Friday interview on Fox & Friends, Homeland Security Secretary Kirstjen Nielsen said Jackeline’s death was “heart-wrenching” and said DHS staffers did everything they could to save her. However, she blamed the girl’s family for taking her on the dangerous cross-country trek to cross the border.

“This family chose to cross illegally,” Nielsen said. “They were about 90 miles away from where we could process them. It took a such a large crowd, it took our Border Patrol folks a couple times to get them all.”

DHS did not respond to a request for comment Friday about the AAP’s letters or Kraft’s allegations about the conditions at DHS processing facilities.

The AAP said that Jackeline’s death shows why pediatricians need unfettered access to the children in DHS custody.

“The first thing that’s needed is pediatric oversight of these centers so that as children and families are processed, these children have access to the basic necessities of pediatric care that’s needed,” Kraft says.

The AAP issued detailed guidance in 2017 on the care of migrant children in detention. The group also issued a statement criticizing the Trump Administration’s policy of separating migrant children from their parents at the border earlier this year.

Kraft says that, as the group representing pediatricians, it is the duty of the AAP to give medical advice on the care of children in government custody.

“We all agree that we should treat children with compassion and we should never let a child die in United States custody. I don’t think anyone would disagree with that, so that’s where we speak,” she says.

Kraft says the AAP also wants DHS to end the policies that have resulted in the detention of children and families — and return to Obama-era policies of releasing asylum-seekers into the U.S., pending immigration court hearings.

“We know that these families will stay in touch with their immigration attorney and will make it to their asylum hearings,” she says. “They’re not the threat that the rhetoric is telling us they are. Certainly not 7-year-old children.” 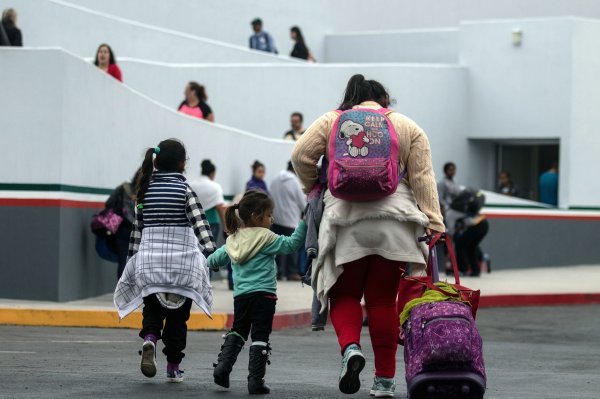 Trump Wants Migrants to Wait in Mexico. It's Not That Simple
Next Up: Editor's Pick