Merriam-Webster, the American company based in Springfield, Mass., chooses its “word of the year” a little differently than other dictionaries. While every firm tries to anoint a word that sums up the preoccupations of the past year, Merriam-Webster also requires that, according to its own data, the word be one that people were looking up a lot more than usual.

There were big spikes for several words in 2018, like when everyone raced to look up the meaning of lodestar — hoping it would help lead to the identity of a Trump Administration official who wrote a notoriously anonymous op-ed — or when people mulled the word maverick after admirers used it to eulogize Sen. John McCain.

Yet there was one word that kept spiking all year long, according to Merriam-Webster, one whose familiarity belies its complexity, one that can seem both inevitable and unattainable: justice. “It’s on our minds,” Editor-at-Large Peter Sokolowski tells TIME. “And it’s on our minds this year in a very particular way.”

The word has many definitions, ranging from the snappy (“conformity to truth, fact, or reason”) to the byzantine (“the maintenance or administration of what is just, especially by the impartial adjustment of conflicting claims or the assignment of merited rewards or punishments.”)

And it had many moments. People looked it up when uber-celebrity Kim Kardashian visited the White House, twice, in the name of criminal justice. Interest swelled as Brett Kavanaugh and Christine Blasey Ford, the woman who accused him of sexual assault, gave testimony bearing on whether he would become the next Supreme Court justice.

Readers tried to better understand the word as politicians and protestors made demands for racial justice and economic justice and social justice, on social media and campaign trails and football fields. And lookups saw a jump nearly every time there was a major news story about the Department of Justice, whether that government agency was investigating Tesla or changing its policy on the enforcement of marijuana laws.

But when Sokolowski says “particular,” he particularly means the Russia investigation and the broader values that it symbolizes. Whether one believes that special counsel Robert Mueller is leading a righteous crusade or a “witch hunt,” the pursuit of justice, and the potential obstruction of that pursuit, are at the eye of the storm. Lookups for the word surged on Aug. 1 when President Trump called on then-Attorney General Jeff Sessions to shut down the probe, which has only sprung more penetrating tentacles since then. “That idea of a system, that is fair or not fair,” Sokolowski says, “is what is at play here.”

People sometimes used the word as a summation in 2018, suggesting the system had worked the way it is supposed to, proving that America is a nation governed by laws, not just power. “Justice?” comedian Stephen Colbert proposed, as he riffed on the prison sentence that Trump’s attorney Michael Cohen received in December. “Justice?”

But people seemed more often to use it “as a kind of a cry,” as Sokolowski says, demanding that an obscure, flawed system work — that facts be respected at a time when truth is under threat, that fairness be realized even when chaos reigns, that bad guys get their comeuppance and victims get their recognition without delay and out in the open.

Calls for justice came from people insisting that police violence be seen and from people urging that all immigrants follow the same rules when seeking a home in this country. They didn’t come just from the right or the left, the open-armed or the isolationist. A yearning for order, though felt differently, might be something that united Americans across the spectrum. “Justice implies a bureaucracy of fairness,” Sokolowski says, “an expectation of having your side of the story listened to.”

So far, the “word of the year” selections for 2018 have not been upbeat. Though a selection is still to come from the American Dialect Society, Oxford Dictionaries chose toxic and Dictionary.com chose misinformation. Merriam-Webster’s choice isn’t light-hearted either, but it highlights a value that embodies the best of the country’s pursuits rather than elements that seem to be corroding its foundations. 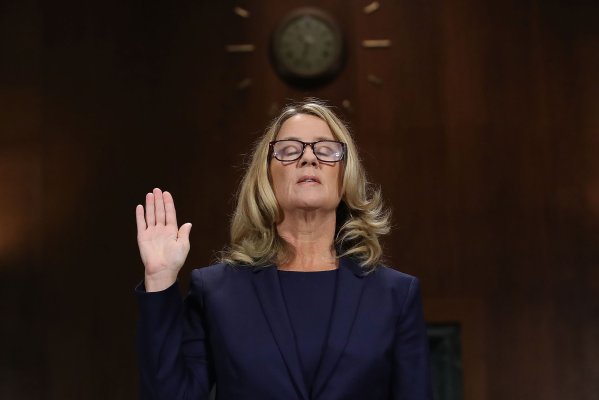 Why Americans Are Still Grappling With Christine Blasey Ford's Legacy
Next Up: Editor's Pick