Are dictionaries getting more political? That’s what some people claim. When Dictionary.com or Merriam-Webster.com post Twitter lists of trending lookups that include such politically charged items as dotard, witch hunt and dog whistle, it looks to some like presidential trolling. Others object to the dictionary’s adoption of controversial new terms like Latinx. Lexicographers reply that they are merely keeping up with what’s happening in the culture. The words that make their lists are the ones that users look up the most. Any new words added to the dictionary have been in common use for a while. If the dictionary seems politicized, it’s because we’re all politicized these days.

Users reading their own views into the dictionary is nothing new. When the great lexicographer Noah Webster brought out A Compendious Dictionary of the English Language in 1806, it was seen as a radical political act. To some extent, it was political. Webster believed that Americans needed and deserved their own linguistic standard, and as a Federalist, he hoped that such a standard would help to unify the new country.

His main aim, however, was practical. He wanted to make as complete a record of the American language as possible, encompassing recent word inventions and changed definitions. As he explained in the preface, “The descendants of the settlers … will continue to speak the English language, but with numerous variations.” Americans will “originate new words, or give to old words new signification, which will never be generally received or known in Great Britain.”

A Compendious Dictionary contained over five thousand words never before recorded in a dictionary. Webster collected scientific terms like telegraph and vaccination and words with changed meanings like girdle (choke off trees to kill them), and updated legal terms like bankrupt and default. He also included American word inventions such as advocate, obligate, the verb to caucus, and lengthy to describe a long, tedious speech. Some terms, like constitutional (“legal, according to the original established government”) and revolutionize (“to effect a change of government”) had definitions based on recent American political events. Most, however, were simply words in common use in the early republic.

Nonetheless, Webster’s dictionary was seen as making a political statement. In 1806, when the Revolution was still fresh in the common memory, most Americans remained culturally loyal to England. English writers set the literary standard, and Samuel Johnson’s 1755 Dictionary of the English Language represented the benchmark for language use. Many of Webster’s fellow citizens weren’t ready for complete linguistic emancipation.

Reviewers were scandalized by what they saw as Webster’s attempt to validate words that hadn’t been properly vetted by British authorities. The Monthly Anthology huffed about “the approbation given to … vulgarisms … and unauthorized idioms.” John Pickering, a lawyer and linguist who had served at the British Embassy, considered Webster “a thirsty reformer,” prepared to “unsettle the whole of our admirable language.” A reviewer for Port Folio magazine was aghast at Webster’s revelation that he was planning an even more substantial dictionary for the future. He speculated sarcastically about the inclusion of such American “idiotisms” as hern and yourn, tote for carry, and right good.

Like modern lexicographers, Webster responded that he was simply showing the language as it was. In a letter to his brother-in-law he admitted to introducing local terms, but asked, “Must they be left unexplained because they are local? This very circumstance renders their insertion in a dictionary the more necessary.” Many at the time remained unconvinced.

Webster’s monumental An American Dictionary of the English Language appeared in 1828. It was far more comprehensive than his earlier work, with about 12,000 new words and between 30,000 and 40,000 new or updated definitions. It also included a daring new feature — hundreds of example quotations from American sources. Instead of relying on British literary greats like Dryden, Shakespeare and Milton, he looked to Franklin, Jefferson, Adams and Washington Irving.

Webster’s aim in writing the dictionary remained the same. “It is not only important, but in a degree necessary,” he wrote in the preface, “that the people of this country should have an American Dictionary of the English language; for, although the body of the language is the same as in England, … yet some differences must exist.” Americans had a different physical environment, a different form of government, different laws and different customs. They needed a reliable record of the new and changed vocabulary resulting from that reality.

The new dictionary included hundreds of Americanisms. It featured Native American words like raccoon, persimmon, moose, tomahawk and powwow.Webster also included many words from government and politics — senate, congress, census. In spite of the blowback that had hit him in 1806, he also retained and even added to the newly created verbs that so annoyed the critics — both political terms like Americanize, legislate and electioneer, and homespun words like citizenize, to ambition and calculate in the sense of think. He even swept in a handful of slang — change of heart, let rip, chaw, boost.

Although Webster had doubled down on his commitment to American word creations, the response to his second dictionary was much friendlier than the outrage that met his first. Nearly all the reviews were positive. The same American words that had scandalized reviewers in 1806 came in for glowing mention 22 years later. The New York Evening Post quoted from the report of a local educational committee: “The committee consider the excellence and value of this work to be much enhanced by the addition of more than twelve thousand words.” A writer for the North American Review predicted that a dictionary containing “a copious vocabulary … will be sought for by the greatest number of readers.”

What happened between 1806 and 1828 to change reviewers’ minds about Webster’s dictionaries? The War of 1812 was one likely influence. Sometimes called “the second War of Independence,” it was the final political break with the old country. At the same time, the country’s boundaries and population were both expanding. Americans began to see themselves as Britain’s cultural equals and their vernacular speech as a cause for pride. The contents of the dictionary hadn’t changed, but the people using it had.

Rosemarie Ostler is a linguist and former librarian, Her books about slang and word origins explore the colorful turns of phrase in America’s past lexicon. Her articles have appeared in The Saturday Evening Post, Whole Earth, Christian Science Monitor, Verbatim, Writer’s Digest, and Entrepreneur.com among others. Her latest book is Splendiferous Speech: How Early Americans Pioneered Their Own Brand of English (2018). 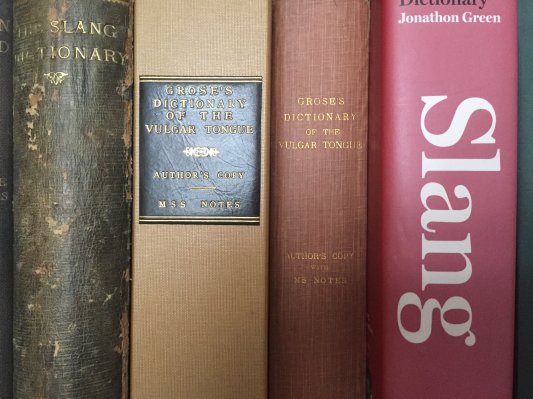 Why Slang Is More Revealing Than You May Realize
Next Up: Editor's Pick