Apollo 8’s ‘Earthrise’ Photo Changed Our Understanding of Our Place in the Universe. Here’s the Story Behind the Picture

It was a bad day for Bill Anders when NASA took away his spacecraft and gave him a camera. The spacecraft was a nifty one: the spindly, four-legged lunar module that would ferry two members of a three-man Apollo crew down to the surface of the moon while the third member minded the Apollo mothership in orbit overhead. Anders was a rookie astronaut, a member of the newest class of recruits, and in the run-up to the Apollo missions he knew it was unlikely he would ever get to command a lunar module; but if he learned every little thing there was to know about the machine — making himself as much of an expert as the people who designed it — he could surely snag himself a number-two slot.

On his first flight, he was was handed just the assignment he wanted, test-flying both the Apollo and the lunar module in low-Earth orbit, along with his senior crewmates Frank Borman and Jim Lovell. If that went well, Anders’ next flight would surely be a trip to the moon.

But in the summer of 1968, those plans got turned upside down. Word from the lunar-module manufacturer was that the ship would not be ready for flight until sometime in 1969. The decision was thus made that Borman, Lovell and Anders crew, the crew of Apollo 8, would fly anyway with what they had — the Apollo orbiter alone — and take it to the place it was designed to go in the first place: the moon.

Borman was thrilled at the chance to beat the Soviet Union into lunar orbit, scoring a key win in the Cold War. Lovell, who was never quite so happy as when he was in space, saw the mission as the stuff of Lewis and Clark. Anders, a lunar-module pilot with no lunar module, could muster no such enthusiasm. His role on this flight would now be to serve as the mission’s photographer and cartographer; that was no small thing, since photographing the lunar surface from an orbital altitude of just 60 miles was the best way for NASA to survey potential landing sites for the missions to come. Still, Anders could not help but feel that his contribution to the landmark mission in which human beings would at last reach the moon would be minimal. He was wrong.

As the spacecraft orbited the moon on Christmas Eve 1968, precisely 50 years ago, he and Lovell and Borman got their first view — humanity’s first view — of the Earth rising over the wasteland of the moon. The picture Anders took in those fleeting moments became one of the most influential ones in history, credited both with helping to kick-start the environmental movement and with ending the exceedingly bloody year that was 1968 on a note of redemption. The conversations in the spacecraft at the time were captured by an on-board voice recorder. The excerpt below from my 2017 book Apollo 8 describes the scene, reconstructed with the help of interviews with the crew, as the astronauts emerged from the far side of the moon, not yet knowing the image that awaited them.

Borman grabbed his thruster handle and pitched the ship up slightly. He yawned — loudly enough for the cockpit tape to capture the sound — and when the spacecraft was in position, took a moment to enjoy both the silence in his headset and the new view outside his window. The spacecraft was now positioned in such a way that for the first time, the astronauts could see all the way to the horizon of the moon as well as into a huge swath of black sky above and beyond it.

None of the men had thought about what that would mean — that when they came around from the far side of the moon and once again prepared to establish a straight line of radio communication between them and the Earth, there would also be a straight line of sight. That meant they could watch, at last, as their home planet rose above the bleak lunar plains.

“Oh, my God!” Borman suddenly said. “Look at that picture over there! Here’s the Earth coming up. Wow, is that pretty!”

The other men looked and, just as Borman said, the blue-white ball of glass that was home to everything they knew, home to every creature and thing and event that had existed or occurred across the entire expanse of Earthly history, was hovering over the pitted wreck that was the lunar landscape. The astronauts had seen the Earth and they had seen the moon, but they’d never seen them together — the ugly broken world beneath them and the lovely, breakable one in front of them.

It was Anders who shook himself from his reverie first, struggling to remove his black and white film magazine from his camera and replace it with something that would better capture what he was seeing. “Hand me that roll of color, quick,” he said to Lovell,

Lovell pulled himself away and dove under the seats to the equipment bay. “It’s down here?” he asked

Lovell reappeared and handed Anders the film, but by then the Earth had drifted out of view.

“Well, I think we missed it,” said Anders, equal parts disappointed and irritated.

“Hey, I got it right here!” Borman exclaimed, having shifted to a different window.

Anders shoved off from the bulkhead, darted to where Borman was positioned, looked out the window and immediately began firing his shutter.

“Take several of them,” Borman ordered.

“Take several of them,” Lovell echoed.

Anders did. But only one of the pictures would be the one that mattered. Only one, now hidden invisibly inside Anders’ camera, would eventually move people to appreciate that worlds — like glass — do break and that the particular world in the picture perhaps needed to be cared for more gently than humans ever had before. That was the picture — the one that would be called Earthrise — that rested inside Bill Anders’ camera. Only now, on Christmas Eve day, 1968, nobody knew it. 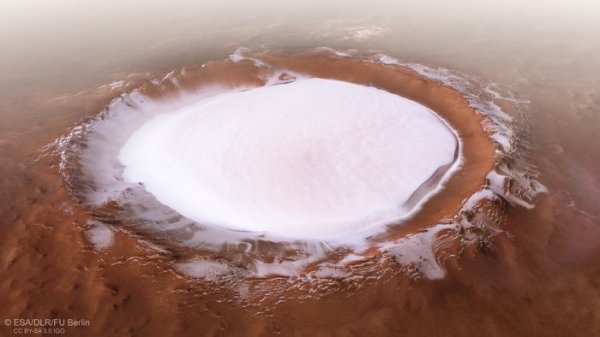 People Are Already Planning on Ice Skating on Mars Thanks to This Stunning Photo
Next Up: Editor's Pick