Joy to the World. The Adorable 2018 Royal Family Christmas Cards Are Here

For their card, the Duke and Duchess of Sussex, Prince Harry and Meghan Markle, are shown from behind watching fireworks at their wedding reception, a previously unreleased shot of the big May event, according to Kensington Palace.

Harry’s older brother William, Duke of Cambridge, and his wife Kate, Duchess of Cambridge, chose an autumnal image of them and their children. It was taken in the grounds of Anmer Hall, a country house gifted to the family by the Queen, in eastern England, the palace said.

Princess Charlotte, 3, who stands between her parents in the photo, appears to be re-wearing a jumper once worn by her 5 year-old brother Prince George, according to the MailOnline. Prince Louis, the youngest royal, now 7 months-old, is seen sitting on his mother’s lap.

Harry and William’s father, Prince Charles, is seen with his wife Camilla, Duchess of Cornwall, in their Christmas card. The photo was taken this summer in the gardens of Clarence House, the couple’s household said as it shared an image of the card balanced on a Christmas tree. 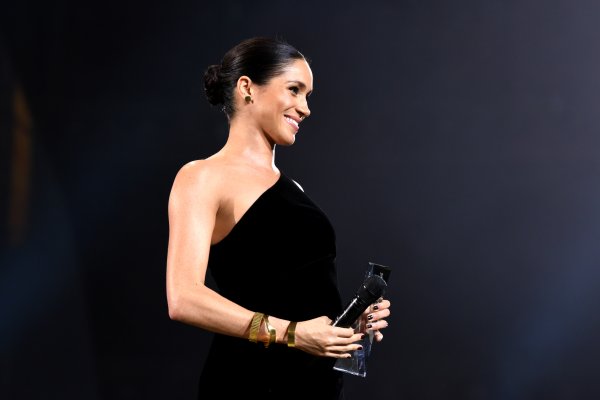 Meghan Markle Stole the Show at the British Fashion Awards
Next Up: Editor's Pick