Federal prosecutors said this week that at least one unidentified member of Donald Trump’s campaign joined his lawyer Michael Cohen and the publisher of the tabloid National Enquirer, David Pecker, in a 2015 scheme to kill unflattering news stories about the then-candidate as he sought the presidency.

The other individual present was Donald Trump himself, according to a person familiar with the matter who asked not to be identified.

The U.S. said the plan involved Pecker, the chief executive officer of Enquirer parent American Media Inc., flagging negative stories about Trump’s relationship with women. He would then work with Trump’s nascent presidential campaign to purchase the stories to prevent their publication, according to a non-prosecution agreement with AMI and federal prosecutors in Manhattan made public Wednesday.

The emergence of Trump’s participation in a plot that federal prosecutors described as “secret and illegal” is just the latest in a series of legal and political headaches that have gripped the White House as the Justice Department further probes Trump’s conduct before and after he won the 2016 election.

“The fact that he was in the room will increase his culpability and will make his lawyers very nervous,” said Jessica Levinson, a professor of election law and governance issues at Loyola Law School in Los Angeles.

Trump’s presence at the discussion potentially undercuts his defense that the payments were a private matter unrelated to the campaign as well as his position that he didn’t knowingly and willingly violate campaign finance laws, according to Levinson.

The White House didn’t immediately respond to a request for comment.

AMI paid $150,000 to silence former Playboy model Karen McDougal, who claimed she had an extramarital affair with Trump. The practice of acquiring stories and not running them, common in the tabloid industry, is known as “catch and kill.”

Federal prosecutors said the expenditure amounted to an effort to influence the 2016 election and a violation of campaign finance law.

Cohen facilitated the payment, federal prosecutors said, which came “in coordination with and at the direction of” Trump. On Thursday, Trump wrote on Twitter that he never directed Cohen to break the law.

“He was a lawyer and he is supposed to know the law,” Trump said. He added that other lawyers, who he didn’t name, have said that he did nothing wrong and that Cohen pleaded guilty to campaign finance violations that weren’t criminal.

Trump’s involvement in the catch-and-kill plan had been referenced in legal documents involving Cohen, but the president wasn’t named directly. On Wednesday, Cohen was sentenced to three years in prison for a variety of crimes including tax evasion and campaign finance violations.

NBC reported earlier Thursday that Trump was the third person at the August 2015 meeting with Cohen and Pecker. Cohen didn’t respond to a request for comment. 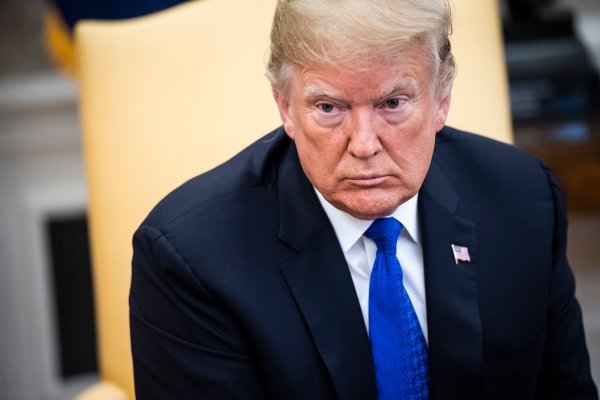 Trump Says He Did Nothing Wrong With Illegal Payments
Next Up: Editor's Pick