Ruth Bader Ginsburg is having quite a year at the movies: In May, the documentary RBG offered a new look at Ginsburg’s life through interviews with the “notorious” Supreme Court Justice herself as well as family members and scholars. And on Dec. 25, a new movie dives into another chapter of her career. On the Basis of Sex, directed by Mimi Leder and starring Felicity Jones as a young Ginsburg and Armie Hammer as her husband, Martin Ginsburg, hones in on her early years as a mother, student, professor and, finally, lawyer. Though the film spans more than a decade, it focuses on Ginsburg’s first gender discrimination case, Moritz v. Commissioner. In the case, which took place in 1972, the Ginsburgs argued as a team that Section 214 of the United States tax code—which denied Charles Moritz, a never-married man, the right to deduct expenses for the care of his ailing mother—was unconstitutional.

“On the Basis of Sex is an origin story,” Leder said at the New York premiere of the film, with an audience that included former Secretary of State Hillary Clinton, Gloria Steinem (whose work has a few hat-tips in the film) and Ginsburg herself. “But Ruth Bader Ginsburg is not a superhero. She’s a woman,” Leder continued. Mortal though she may be, the Ginsburg Leder depicts is certainly a woman who is super: she takes care of her young daughter, Jane, while acing her own Harvard Law School classes and making sure her husband passes his, even after he is diagnosed with testicular cancer.

Viewers might be surprised to find that for a biopic whose subject was involved in its development, On the Basis of Sex is somewhat fictionalized. “This film is part fact, part imaginative—but what’s wonderful about it is that the imaginative parts fit in with the story so well,” Ginsburg told NPR’s Nina Totenberg following the New York screening. The screenwriters, who include Ginsburg’s nephew, Daniel Stiepleman, clearly decided that strict adherence to fact didn’t always serve the story.

There are some moments of the film—namely, sexy scenes between Ginsburg and her husband—that might raise eyebrows. But when Totenberg asked Ginsburg about these scenes, Ginsburg smiled and responded, “My children are in the audience: I think they probably would agree with me that their daddy would have loved it.”

Here’s what’s fact and what’s fiction in On the Basis of Sex.

Fiction: Ginsburg attended her husband’s classes for him while he underwent cancer treatment

In the film, when Martin “Marty” Ginsburg is diagnosed with testicular cancer—a grave diagnosis in the 1950s—he and Ruth agree that they’re going to fight it together. Soon after, Felicity Jones’ Ruth arrives late, briefcase and books in hand, to a class full of men. After explaining that she’d be attending her husband’s classes in his stead, she responds affirmatively to the professor’s incredulous question: “In addition to your own?”

Though the cancer diagnosis and the couple’s reaction to it is true to life, Ginsburg didn’t really attend her husband’s classes during his third year of law school. Instead, their peers helped out. His classmates took diligent notes and sometimes even tutored him. “That’s why I don’t think of Harvard as the fiercely competitive institution it’s sometimes described as,” Justice Ginsburg said in a separate interview with Totenberg for the Academy of Achievement. “When Martin became ill, my classmates, his classmates, they all rallied around us, and made it possible to get through that year.”

Ginsburg did type her husband’s papers and make sure he was able to complete his coursework in time for graduation. Finally, in the last two weeks of the semester, Martin Ginsburg was well enough to attend class, and he earned his best grades that semester.

Fact: Ginsburg graduated from Columbia after transferring from Harvard

After Martin Ginsburg graduated from Harvard Law School in 1958, Ruth still had one year left. But Martin was offered a job in New York City that he couldn’t pass up. Ruth decided that she needed to be in New York with him and their young daughter and couldn’t stay in Boston to complete her degree.

But the Dean of Harvard Law School, played by Sam Waterston in the film, wouldn’t allow her to complete a Harvard JD with courses from Columbia. The film’s depiction of Ruth’s rebuttal—that if students could transfer to Harvard after the first year and earn a degree, surely she could do the same by finishing coursework at Columbia—is in line with how that meeting really went down. Despite her protests, Ginsburg did end up earning her degree from Columbia Law School.

Later in life, after she had achieved great success in her career, the faculty of Harvard Law School wanted to grant her an honorary degree. But she declined: her degree would always be from Columbia, and, as she said about the incident, “You can’t rewrite history.

Partially Fact: Even with her outstanding resume, Ginsburg couldn’t land a job with a law firm

Once she graduated from Columbia Law School, Ginsburg should have been unstoppable. She was at the top of her class and had been on both the Harvard Law Review and the Columbia Law Review. But she was also Jewish and a woman, and finding work was not easy.

Though the movie shows that Ginsburg couldn’t get a job as a lawyer and joined Rutgers University Law School faculty as her first job, she actually clerked for a few judges before her position at Rutgers, starting with U.S. District Judge Edmond Palmieri. The discrimination Ruth faces in the movie during job interviews is not dissimilar from how Ginsburg has described those experiences. One judge, Ginsburg recalled in the Academy of Achievement interview, wouldn’t consider her for a clerkship because he didn’t feel comfortable swearing in front of a woman.

Once at Rutgers, Ginsburg wasn’t free from discrimination because of her gender, either. When she became pregnant with her second child, James, she did not yet have tenure. Fearing that if she told her colleagues, she wouldn’t be hired for the next year of teaching, Ginsburg hid her pregnancy with baggy clothing until she had received the next year’s contract.

The picture the movie paints of the Ginsburgs’ egalitarian marriage is true to the life they led. Martin, who died in 2010, loved to cook dinner for the family and supported his wife in all of her professional pursuits—an arrangement that was not particularly common for that time. Ginsburg has said that when she met Martin at Cornell, where they both earned their undergraduate degrees, she was drawn to him because he was the first man who cared about her intelligence.

At the New York premiere, Ginsburg said that the way Armie Hammer’s Marty chops vegetables as though he were on the Food Network was especially touching and representative of her beloved husband. Martin was such a talented cook that he often made dinner for his wife’s law clerks.

On the Basis of Sex suggests that the case the movie follows is Ginsburg’s first. And although Moritz v. Commissioner definitely was the first well-known case Ginsburg tried, it wasn’t her first.

What is true, as Ginsburg told Totenberg, is the movie’s depiction of how she came to discover this case. “I don’t read tax cases,” Ruth tells Marty in the film. But he encourages her to read this specific one about Moritz. Ginsburg says that Marty, who was a tax attorney, really did present her with this case, and she even said those exact words in response.

Once she read the case, she knew they had to take it on. Because the plaintiff was male, Ginsburg knew the judges would be more receptive to the concept of gender discrimination—and the notion that it was harmful.

Fiction: Ginsburg flubbed the beginning of her first opening statement

One of the first things Ginsburg wants to clear the record on: she would never flub the opening of an oral argument. When Jones’ Ruth begins her argument for three intimidating judges on the 10th Circuit Court of Appeals, she pauses uncomfortably. “Whenever you’re ready, Ms. Ginsburg,” one judge goads.

But the real Ginsburg said this is one of the film’s moments of fiction. “I didn’t stumble,” she told Totenberg.

Fact: Ginsburg and her husband split the time when arguing Moritz v. Commissioner

The pair won the case. The 10th Circuit decided that the tax code was “invidious discrimination,” marking the beginning of Ginsburg’s mission to take down each and every law that discriminated on the basis of gender. (Despite the movie’s title, Ginsburg did use the word “gender” instead of “sex” in her brief for this case.)

In the movie, Ruth’s childhood friendship with the legal director of the American Civil Liberties Union (ACLU), Melvin Wulf (played by Justin Theroux), is tantamount to her success in Moritz. This is true. The two attended a Jewish summer camp together, and when Ginsburg told her friend about the case she and Martin had found, he agreed that the ACLU would finance its litigation.

Fact: Moritz led to Ginsburg’s continued work with the ACLU

After winning Moritz, Ginsburg co-founded the Women’s Right’s Project at the ACLU in 1972, where she continued the fight to promote gender equality. Without Ginsburg’s work eradicating the laws that discriminate on the basis of sex, the country may not look how it does today: a country which, in spite of its problems, does have very few such laws that remain federally, according to Emily Martin, the vice president for education and workplace justice at the National Women’s Law Center. “It’s definitely the case that as a result of the work that she led, what was once really common in the law no longer is,” Martin tells TIME. 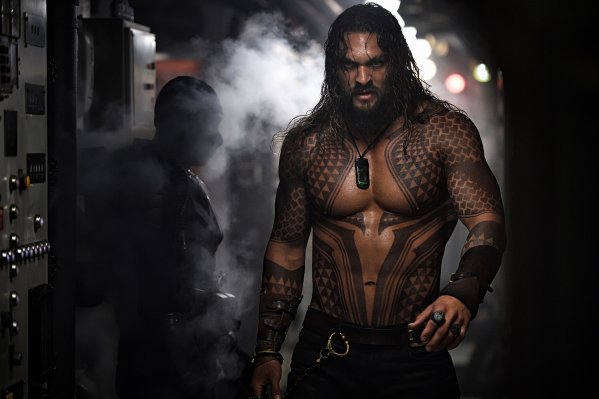 What the Aquaman Post-Credits Scene Means for the DC Extended Universe
Next Up: Editor's Pick