Theresa May Could Be Ousted As British Prime Minister Today. Here’s What to Know

DEC. 12: Prime Minister Theresa May makes a statement in Downing Street after it was announced that she will face a vote of no confidence
Leon Neal—Getty Images
By Billy Perrigo

A vote of no confidence in British prime minister Theresa May will be held on Wednesday evening, after a crucial number of lawmakers in her ruling Conservative party revolted over Brexit.

May will need to secure the support of more than half her party’s 315 lawmakers for her position to be safe. If she loses, she will be forced to step down as prime minister and will be unable to run in the leadership contest that follows.

May’s decision on Monday to postpone a key parliamentary vote on the Brexit deal she negotiated with the E.U., fearing loss by a “significant margin,” is widely seen as the factor that led lawmakers to trigger the vote.

Here’s what to know about the vote that could force Theresa May from office.

How was the vote of no confidence triggered?

The vote was prompted on Tuesday, the date the parliamentary vote to accept May’s deal was set to be held.

To trigger the vote, 48 Conservatives —15% of the party’s lawmakers in parliament — submitted letters to Sir Graham Brady, the party official in control of leadership matters. (Because Britain is a parliamentary democracy, May leads the country because she is at the helm of her party. If her party ousts her, she ceases to be prime minister.)

The lawmakers publicly calling for May to stand down are overwhelmingly further to the right of the party than the prime minister. They are pushing for a more severe break from the E.U. than May is currently proposing — a so-called “hard Brexit.”

“The hard Brexiters have in effect become a party within the Conservative party,” says Robert Hazell, a politics professor at University College London. “They wanted to be able to vote down May’s Brexit deal on Tuesday, and I think what’s finally tipped them over into 48 letters of no confidence is that they’ve lost any hope that this prime minister can deliver the kind of hard Brexit they want.”

The process is a fast one: lawmakers will submit their ballots between 6 and 8 p.m. U.K. time on Wednesday, just a matter of hours after the news became public.

What are the rules?

For May to be ousted, those 48 lawmakers will need to convince an extra 110 of their colleagues (158 Conservative lawmakers in total) to vote against May in a secret ballot. “My hunch is that it’s unlikely,” says Hazell. “As many commentators have said, the Conservatives would be mad to change their leader at this crucial moment of national crisis.”

“I don’t think it’s very likely at all, for them to get 158 votes,” agrees Wyn Grant, emeritus professor of politics at the University of Warwick. “The risk is that she wins, but not by a convincing margin. If more than 100 MPs, about a third, put in a vote of no confidence, then her position would be difficult. There would then be pressure on her to stand down from senior cabinet ministers.”

But if May wins on Wednesday evening, then she is safe from another leadership challenge for a year. This would take her well past March 29, 2019, Britain’s scheduled E.U. exit date.

How has May reacted?

On Wednesday morning, as the news broke publicly, May stood at a podium in front of the famous black door of her 10 Downing Street residence — a giant Christmas tree glittering behind her — to make an address.

“I will contest that vote with everything I’ve got,” she said, noting her history of public service. She argued that if she lost the vote, Brexit would have to be delayed because of the time-consuming leadership contest that would follow. Hard Brexiters say this is not necessarily true.

Even if she wins convincingly, lawmakers will have to approve or reject her deal. The vote on that deal was scheduled for this week, but May delayed it on Monday, saying it was clear she would have lost by a “significant margin.”

May’s day will now be spent trying to convince as many of her lawmakers as possible to support her leadership. She has canceled a trip to Ireland scheduled for Wednesday in order to rally support.

Is she facing open revolt?

May’s cabinet is split between ‘Brexiters’ and ‘Remainers,’ but her entire top team fell in behind her on Wednesday morning, pledging to vote for her. And, according to the BBC, 158 lawmakers (the number she needs to survive) have already pledged their support.

But the ballot on Wednesday evening will, crucially, be secret — meaning lawmakers do not necessarily have to align their vote with their public statements.

Rebellious lawmakers on the right of the party are mounting a renewed push to oust May, after an attempt in November, in response to the finalization of May’s deal, failed.

Jacob Rees-Mogg, a leading Brexiter who publicly submitted a letter of no confidence last month, said Wednesday: “The Country needs a new leader, it is time for Mrs May to resign.”

But hotly-tipped contenders for the party leadership in future, including the Foreign Secretary Jeremy Hunt, the Home Secretary Sajid Javid, and the Environment Secretary Michael Gove, all pledged their support for May.

The former Foreign Secretary, Boris Johnson, who resigned in July over May’s negotiating approach, remained silent. He has run for the party leadership before, and is regarded by many lawmakers as having ambitions for the position.

If May loses, who would lead the country?

If May fails to garner the support of half her lawmakers, she will have to stand down as prime minister.

A leadership contest will also begin within the party, with lawmakers being able to put themselves forward for the position.

Multiple rounds of voting by lawmakers will then commence, until two candidates remain. The Conservative party membership (comprised of people from around the country, not just lawmakers) will then have the chance to vote on the candidates.

“Here the selection process by Conservative MPs is really important,” says Hazell. “What is certain is that when it goes to the party membership, the party membership are overwhelmingly pro-Brexit. Therefore they will support any hard Brexit candidate.”

What this means, Hazell says, is that Boris Johnson may still stand a chance at becoming leader, despite having alienated many of his supporters in parliament with his criticisms of May. “If MPs want to prevent Boris from becoming leader, they have got to prevent him being one of the last two names. Because Boris is the kind of leader who is likely to be elected by the membership,” Hazell says.

May made the argument in her Downing Street speech that a leadership contest would inevitably drag on, putting Britain’s in danger of not being able to exit the E.U. on the scheduled date of March 29, 2019.

However Brady, the official who informed May of the no confidence vote, told Sky News that the list could be whittled down to two candidates within 10 days.

It is therefore unclear whether a new leader would be in place by Jan. 21, the date by which the government has pledged the postponed vote on May’s Brexit deal will occur in parliament.

Is May safe if she wins?

After postponing the vote on the deal, May embarked on a European tour, heading to the Netherlands, Germany and Belgium to speak to E.U. leaders. But those leaders have repeatedly said they are unwilling to renegotiate the deal.

And as May admitted herself in her speech on Wednesday morning, “A leadership election would not change the fundamentals of the negotiation or the parliamentary arithmetic.”

May could also face a leadership challenge even if she wins narrowly, according to Grant, the politics professor.

“I think the only cabinet members who might want to exert that pressure are leadership hopefuls,” says Hazell. “You then have to ask yourself how mad they are to want to become prime minister at this stage, because the E.U. have made it abundantly clear that this is the best deal on offer. Then again, the Brexiters are slightly mad.” 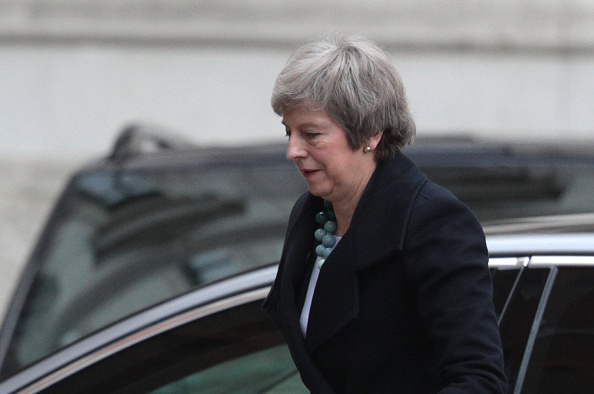 Theresa May Has Delayed a Crucial Brexit Vote
Next Up: Editor's Pick