Google's Biggest Problem? It Can Never Be as Transparent as We Need It to Be

Google CEO Sundar Pichai testified before the House Judiciary Committee on Tuesday in a hearing that lasted more than three hours, yet only scratched the surface of the multiple controversies surrounding the global technology company.

Among the axes that lawmakers ground the most were concerns about the user information Google is hoovering up each second of the day — often without individuals’ understanding — as well as allegations of conservative bias at a company that has unrivaled influence over the information consumed by billions. Many lawmakers grilled Pichai about potential plans to launch a censored search engine in the valuable market of China, while others touched on topics ranging from conspiracy theories on YouTube to illegal drugs sold online.

But most issues boiled down to the same factor: trust. And it’s a resource of which Google is in relatively short supply.

Republicans threatened regulation as they detailed how high the stakes are for the sprawling company, at a time when people are second-guessing the assumption that Silicon Valley is a force for good. “Are America’s technology companies serving as instruments of freedom or instruments of control?” House Majority Leader Kevin McCarthy, a Republican from California, asked as the hearing began. “A free world depends on a free internet. We need to know that Google is on the side of the free world.”

Pichai told lawmakers that Google is on their side — that the company values free speech, desires to give users more control over their data and does not let political bias creep into its products. In his opening statement, the CEO acknowledged that it’s “a challenging moment for our industry” and often admitted that the company needs to do better. “I want to acknowledge there is more work to be done,” he said in response to a question about hate speech, “and with our growth comes more responsibility.”

With that growth, however, comes another problem: that it gets harder and harder to deliver on a promise of transparency.

Recent reports have detailed just how much information companies like Google collect on their users, including details about their physical location. The company has emphasized that location data is crucial to making sure that products work the way people want them to: if Google doesn’t know that a user is in London, it won’t serve up the most relevant results when someone asks for the latest “football” scores, much less deliver on a search query asking for “coffee shops near me” or a request for step-by-step directions.

“Our goal is, we’re trying to help users with the information they want,” Pichai said in response to a question about Android phones tracking users’ whereabouts. “Users give us feedback … They want us to be location-aware.” He emphasized that people have the ability to choose not to share this information with Google, as well.

But lawmakers pressed the CEO on the depth and breadth of Google’s data collection, how much is really necessary to provide such services and whether Pichai believes users truly understand which personal details they’re giving up when they check a permission box in an app. The questions came on the heels of revelations that a privacy flaw in the company’s Google Plus social network had exposed personal details of some 52.5 million users, adding to doubts about whether all the data Google touches can remain secure.

In one rapid-fire exchange, Georgia Rep. Doug Collins, a Republican, asked Pichai about whether Google collects various types of information, asserting that “perception is reality” when it comes to the notion that Google collects too much data.

Device identifiers like an IP address? “Depending on the situation, we could be collecting it, yes.”

Voice and conversations when using Google Voice products? “We give an option to turn it on and off.”

At times, lawmakers betrayed ignorance of technology, as they have with bumbling questions in hearings with tech leaders like Facebook CEO Mark Zuckerberg. One lawmaker grilled Pichai about his iPhone, an Apple product. Another seemed to struggle to describe Google’s products, calling one an “apparatus.”

But this is a moment when tech companies are coming to realize that they need to do a better job explaining what they do and why; confusion among lawmakers is representative of confusion among Americans at large. People understand that technology companies are dominant and ubiquitous, but their sausage-making has long been obscured in jargon and technicalities, much like Congress itself.

This is a knowledge gap that Google will never fully close, despite Pichai’s repeated avowals during the hearing to be more transparent. While the company has shared general information about how its search engine works, the exact details are closely guarded, both for competitive reasons and because bad actors (both ideologically- and financially-motivated) would game the system if the playbook were laid bare. And that is part of what leaves room for the allegations of anti-conservative bias that dominated many Republicans’ questions during the hearing on Tuesday.

If people don’t understand precisely how Google search works, they can doubt the integrity of that process and rationalize conspiracy theories about bevies of liberal engineers secretly manipulating company infrastructure to undermine President Trump — particularly because it is true that tech workers generally skew to the left.

Ohio Rep. Steve Chabot, for example, asserted that Google systematically privileges liberal points of view because when Republicans moved to repeal Obamacare, the first several pages of results he read about that story were negative. The company uses more than 200 signals in determining how to rank pages, none of which is whether content is conservative or liberal, but Pichai veered into the vague as he tried to get this across.

“I understand the frustration at seeing negative news,” Picahi said, explaining that he often has the same experience when searching for news about his company or himself. “But what is important here is we use a robust methodology to reflect what is being said about any given topic at any particular time, and we try to do it objectively using a set of rubrics … Our algorithms have no notion of political sentiment.”

“I sincerely believe that you believe what you’re saying,” Chabot responded. “But you have almost 90,000 employees. Somebody out there is doing something that just isn’t working if you’re looking for unbiased results.”

Another lawmaker grilled Pichai on the names of every employee working on search and what each of them had said on social media, while others brought up anecdotes about Google employees expressing disappointment in the 2016 election results. Evidence of liberality among employees was repeatedly presented as evidence of bias in the tech products they create, leading Pichai to repeatedly say that respecting free expression among employees doesn’t necessitate a lack of objectivity in building things.

Combatting the “somebody out there is doing something” criticisms will continue to be a problem for a company of Google’s size, especially as it continues to produce ever-more technologically sophisticated products.

And the hearing made it clear that more contention between Google and Washington is likely coming. Pichai parried several lawmakers’ questions about work in China by saying Google’s consideration of launching a special search engine that would pass muster with the Chinese government was merely “internal.” He did not rule out doing so in the future, though. And while he expressed support for legislation that would cover areas such as privacy and data security, Pichai was more defensive when asked about anti-competitive practices.

Everyone seemed to agree that Google has great responsibility, but what that means is still up for debate. Many lawmakers emphasized that even if Google wanted to give preference to liberal viewpoints, it could under the law; the First Amendment gives companies rights to free speech. Democratic Rep. Ted Lieu told his conservative colleagues that if they don’t like seeing negative news results, they should blame themselves, not Google and Facebook. “If you want positive search results, do positive things,” he said.

Current law shields tech companies from much responsibility for the content on their platforms, but some lawmakers suggested that this state of affairs must come to an end, in an age of short attention spans and polarizing posts. At one point, Pennsylvania Rep. Tom Marino held up his phone. “There are a lot of people who believe everything that’s put out by anyone. We’re a ten-second society now,” he said to Pichai. “You have a responsibility to see that the truth is out there.” 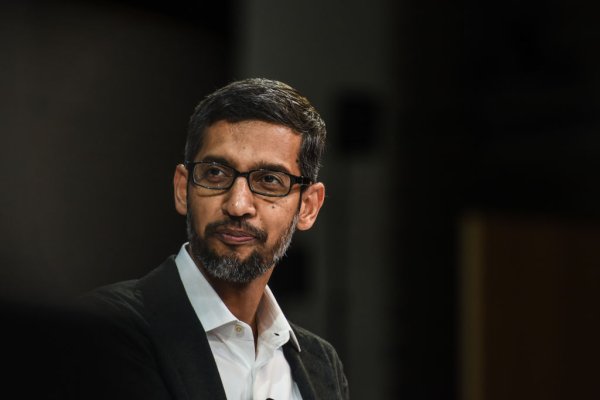 Google CEO to Congress: Company Is Not Politically Biased
Next Up: Editor's Pick