'I Will Shut Down the Government.' Trump Makes Threat Over Border Wall Funding

In a testy meeting with Democratic leaders in the Oval Office on Tuesday, President Donald Trump demanded billions to build a border wall and said he’s willing to shut down the government later this month to get it.

“If we don’t get what we want, one way or the other through you or the military or anybody else, yes I will shut down the government,” Trump said, sitting next to leader of the House Democrats, Nancy Pelosi, and Senate Minority Leader Chuck Schumer as press cameras rolled. “I am proud to shut down the government for border security.”

Pelosi and Schumer arrived at the White House expecting to have a closed-door meeting to lay out how to fund the government before money runs out on Dec. 21. But the two Democratic leaders seemed to feel ambushed when Trump began making his case for wall funding in front of reporters and reading statistics about the impact of wall construction on illegal border crossings.

Read More: Why Negotiating a Border Wall With Trump Is So Difficult

“I don’t think we should have a debate in front of the press on this,” Pelosi said. Later, as the back and forth became more forceful, Pelosi told Trump she and Schumer came to the meeting “in good faith and you turned it into this kind of discussion in the public view.”

Democratic strategists point to low overall support among voters for closing the government to fund the wall and believe public support will be with them if they hold their ground. If there is a shutdown, the political posturing from Democrats and Republicans will be over who gets the blame. Consequently, Trump’s overt admission then that he would proudly back a shutdown appeared to give Democrats ammunition and backed Republicans into a corner. “We did get him to say, to fully own that the shutdown was his,” Pelosi told her her colleagues during a meeting at the capitol, according to an aide in the room.

“This was great for Democrats,” another Democratic aide told TIME. “It made obvious Trump’s take my ball and go home approach on the wall.”

Overall, Pelosi described the meeting as “wild.” “It goes to show you: you get into a tinkle contest with a skunk, you get tinkle all over you,” she said, according to an aide in the room.

“It’s like a manhood thing for him,” she also said. “As if manhood could ever be associated with him. This wall thing.”

Republican Senators were less expressive as they headed into their weekly lunch – where the Vice President was expected to brief them about the meeting – with several professing they had yet to watch the exchange. Incoming Senate Majority Whip John Thune threw his hands in the air when asked about a reaction to the White House meeting. “I heard it was very entertaining television,” he said.

Alabama Sen. Richard Shelby, who chairs the Senate appropriations committee that is helming negotiations on the spending bills, conceded that the meeting was a “step in that direction,” when asked about the increasing prospects of a government shutdown. “We might come together, we might not. I don’t know,” he said.

And Shelby took a long pause when reporters asked him about President Trump expressing pride over backing a shutdown. “I’ve never said that myself,” he said. “I’ve always worked to fund the government.”

However, some aides to Trump believe that a shutdown over wall funding would energize his supporters as the 2020 election season kicks off early next year. But such a move is a gamble. An NPR/PBS NewsHour/Marist poll released Tuesday, showed that 57 percent of voters surveyed believe Trump should compromise on the wall to avoid a government shutdown. Thirty six percent of Americans and two thirds of Republicans were willing to see the government shut down over the issue, a reflection of Trump’s willingness to play his base.

Trump has previously threatened government shutdowns over immigration in July, but signed spending bills that did not include it anyway.

Trump wanted to fight harder for wall funding when a spending bill came up in early October but was convinced to hold off on waging another fight while Brett Kavanaugh’s nomination was still pending in the Senate. 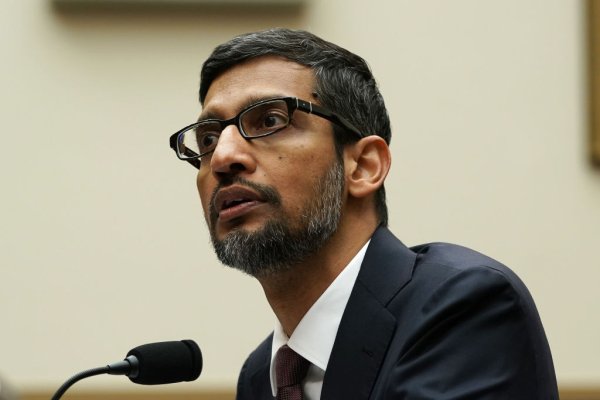 Google CEO Refutes Claims of Bias to Congress
Next Up: Editor's Pick