Sure, art’s beauty is in the eye—or ear—of the beholder. But these eyebrow-raising musical missteps made us question the true subjectivity of the art form. From opportunistic club tracks to derivative rock ‘n’ roll to head-scratching chart-toppers, here are the songs that made us change the channel (or, more likely, skip ahead on our playlists) this year.

“Everybody’s been tellin’ me what they think about me for the last few months,” Eminem intoned on the lead single from his album Kamikaze. “Maybe it’s time I tell ’em what I think about them.” It may look like a self-aware joke, on paper, from a rapper who built his career on insult comedy, but his delivery suggested that he was dead serious. Perhaps Slim Shady really was delusional enough to believe that a diss track making light of Gabrielle Giffords’ shooting and hurling homophobic slurs at Tyler, the Creator constituted new territory for him. To be fair, “Fall” did turn out to be a milestone in one respect: Its tastelessness even alienated his unwitting collaborator on the song, Justin Vernon of Bon Iver, who tweeted that he was “not a fan of [its] message.”

Though the group of three brothers that make up Greta Van Fleet are basically a Led Zeppelin tribute act, the overbearing “Lover, Leaver” shows none of that classic band’s creativity. Instead, they’re mired in toothless throwback rock with lyrics that only sometimes make sense and instrumental breaks that sound muddy.

Kanye has produced an impressive quantity of music this year, but that doesn’t mean that his tracks—including this chart-topper with Lil Pump—were quality. From the plodding, uninspired beat to the degrading and obscene lyrics of “I Love It,” West shows in this song that some ideas should be left on the cutting room table.

Too much of a good thing does exist. Separately, DJ Snake, Selena Gomez, Ozuna and Cardi B are all artists at the top of their respective games. But compiled unnecessarily on this overstuffed yet under-produced Latin-inspired club track, their voices are lost in the mix. It feels like the song is pandering to four different fan bases—and, in the process, puts out the spark that gives each artist his or her own appeal.

If you’re opening a song with the line “Sweet baby, our sex has meaning,” it’s going to need a redeeming musical quality. Unfortunately, “Let Me”—a defanged, vapid R&B love song—fails to overcome its lyrical limitations. Zayn is an adept vocalist, but the forgettable melody and cringe-worthy verses hold him back.

Cardi B’s verse is the only saving grace of this inexplicable chart-topper, which sounds engineered to soundtrack department-store commercials. With lyrics that could have been pulled straight from the dating profile of any man searching for that oh-so-elusive significant other who, get this, loves fun, “Girls Like You” is more headache than hit.

Timberlake’s ill-advised foray into folk comes crashing down on this messy, twangy tune, his voice getting lost in its saccharine lyrics—and in overbearing production bloated with the electronic version of drum circle percussion. He may have meant the song as a ballad, but it never hits a sweet spot.

Christina had Stripped. Miley had Bangerz. Selena and Vanessa had Spring Breakers. And this year, with a string of outrageous rap singles released in anticipation of her upcoming album What Do You See Now?, 21-year-old Bella Thorne became the latest Disney alum to greet adulthood by getting dirrty. The most soul-killing of the bunch was “Bitch I’m Bella Thorne,” a brain-numbingly repetitive track that stole its title and hook from “Bitch I’m Madonna,” jacked its bratty swagger from Kesha’s early output and still couldn’t deliver the campy pleasure Thorne must have been seeking.

For principled hip-hop fans, there were few stories more depressing this year than the continued rise of Tekashi 6ix9ine, a rainbow-haired Brooklyn rapper who pled guilty in 2015 to charges of using a child in a sexual performance. (She was 13 at the time.) Nearly as dispiring is the loyalty Nicki Minaj—one of the most powerful women in music—has shown to him, most notably rapping alongside him and producer Murda Beatz on the single “Fefe.” Listening to a guy with 6ix9ine’s backstory spit lyrics about oral sex is nauseating enough without having to hear Nicki co-sign his every innuendo.

The sensitive thug archetype has been a cliché for at least a generation, but the 23-year-old Texan who had the words “always tired” tattooed on his face this year may have exhausted it for good with this nonsensical, self-aggrandizing whine-fest. Neither sung nor rapped so much as rhythmically brayed, and featuring an only marginally superior verse by Ty Dolla $ign, “Psycho” was the year’s most embarrassing No. 1. From his straight-faced mention of the “friend zone” to the crack, “Had so many bottles, gave ugly girl a sip,” Post Malone proved that all a song needs to achieve massive popularity is some retrograde gender politics translated into third-rate slang. 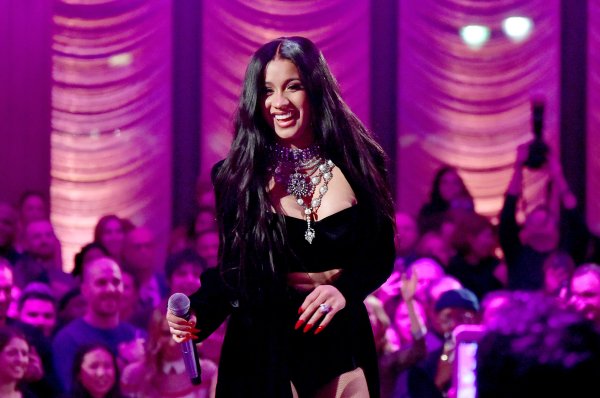 Here Are the Nominations for the 2019 Grammy Awards
Next Up: Editor's Pick