Golden State Warriors star Steph Curry is giving Kyrie Irving some competition when it comes to being a player with a conspiracy theory in the NBA.

During an appearance with teammate Andre Iguodala on Vince Carter, Kent Bazemore and Annie Finberg’s Winging It podcast, the two-time league MVP revealed that he didn’t believe that man actually landed on the moon.

Curry initially asked the rest of the podcast: “We ever been to the moon?” Many others responded to the query with a resounding “nope.”

Curry then announced that he didn’t believe in the moon landing.

A spokesperson for Curry did not immediately respond to TIME’s request for comment.

Curry told ESPN that he was joking about not believing the moon landing on the podcast. NASA extended an invitation for Curry to tour one of its lunar labs at the Johnson Space Center in Houston, something that Curry plans on doing, emphasizing the importance of education.

“Obviously I was joking when I was talking on the podcast. [Then] I was silently protesting how stupid it was that people actually took that quote and made it law as, ‘Oh my God, he’s a fake-moon-landing truther,’ whatever you want to call it, yada, yada, yada. So I was silently protesting that part about it, how the story took a life of its own,” Curry said. “But in terms of the reaction that I’ve gotten, I am definitely going to take [NASA] up on their offer. I am going to educate myself firsthand on everything that NASA has done and shine a light on their tremendous work over the years. And hopefully people understand that education is power, informing yourself is power. For kids out there that hang on every word that we say, which is important, understand that you should not believe something just because somebody says it. You should do your homework and understand what you actually believe.” 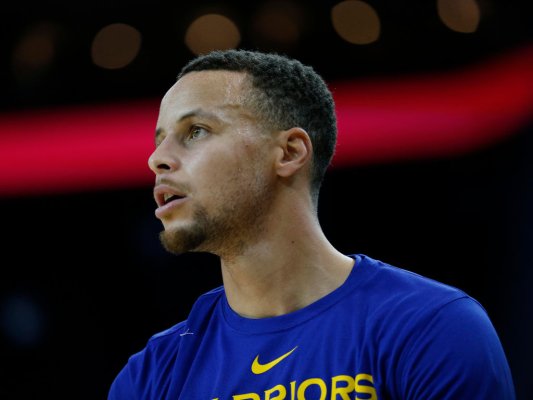 A Girl Wanted Shoes Marketed for Boys. See How Steph Curry Answered the Call
Next Up: Editor's Pick