Lady Gaga’s aspiring pop star in A Star Is Born isn’t the only one who was “off the deep end” this year. Yet unlike Ally—who finds success, fame and an Orange Crush-inspired hairdo—the movies below never quite took off, let alone made it up for air.

Here are TIME’s picks for the worst movies of 2018.

10. Sierra Burgess Is a Loser

A millennial take on Cyrano de Bergerac, the film is more like an episode of Catfish, with the titular nerdy heroine (or should we say anti-heroine) going to cringe-worthy, problematic lengths to make her crush, a popular quarterback, believe that he’s having a deep text correspondence with the requisite mean girl cheerleader. To keep up the charade, Sierra not only catfishes her crush but does despicable things to indulge her infatuation with him—like faking a disability, cyberbullying, disregarding consent and abandoning the real relationships that are actually in her life. Poor writing doesn’t help the movie’s flawed plot, with troubling sentiments about queer, trans and disabled folks thrown in irresponsibly amid a clichéd, overcrowded and underdeveloped storyline. Not even the earnest charms of tried-and-true Netflix darlings Shannon Purser and Noah Centineo can woo viewers into rooting for this toxic romance. Sierra Burgess is a loser, but it’s not for the reasons she thinks.

Steven Soderbergh is one of the most innovative directors working today: Earlier this year, he released a TV series accompanied by an interactive mobile app. For shooting Unsane entirely on iPhones and proving to aspiring, resource-limited filmmakers everywhere that storytelling doesn’t require millions, he deserves heaps of credit. If only the story here weren’t so egregiously mismatched with the cultural moment into which it was released. The harrowing ordeal of a woman (Claire Foy) who is sexually assaulted, tortured, stalked, gaslighted, involuntarily committed and trapped without recourse is one few not-unsane people have an appetite for in the midst of the #MeToo movement (if ever). Buried beneath all that might be an incisive critique of mental health services in the U.S., but the villains are too cartoonish and the plot too outlandish to deliver a credible warning call.

Gotti is one of those movies that’s too much and not enough all at once. Too much acting, too many plot points, too fervent fuhgeddaboutits. But instead of adding up to a coherent whole, it’s as empty as a tumbler of Cutty Sark whiskey in the hand of the Teflon Don himself. Nowhere to be found are the characters’ motivations, nor much explanation as to why this mobster is more deserving of two hours of our time than any other. Blame the screenplay, or the rotating Rolodex of directors and producers it saw over its nearly decade-long development. Either way, John Travolta’s storied New York mafioso is more total pan than made man. We’re gonna make you an offer you can’t refuse: skip it.

In their fourth movie together, Winona Ryder and Keanu Reeves play two hopeless misanthropes thrust together by fate—and the wedding of her ex, who happens to be his brother. It’s entirely a two-hander—none of the targets of the pair’s misanthropy is given any dialogue—which might sound like a point in its favor, given the actors’ individual charms and chemistry together. Unfortunately, when what is meant to serve as entertaining banter consists of nothing but despondent, dejected, narcissistic grievances, viewers may find themselves pressing pause in favor of the pair’s work together in Dracula or A Scanner Darkly.

It’s not easy to make Jennifer Garner unlikable, but this cringy story of a suburban mom avenging the deaths of her family at the hands of a Mexican drug cartel somehow manages to. While the premise—an affable suburban mom turns vigilante killer—sounds like the stuff of a fun thriller, Peppermint wastes it with lazy writing and a formulaic plot. To make things worse, the underlying racial dynamics of the film—Garner’s white American mother guns down menacing Mexican criminals—are troubling at best and deeply problematic at worst.

Midnight Sun is what you’d get if you fed A Walk to Remember through a Make-it-Worse machine. Bella Thorne plays Katie, a girl with Xeroderma Pigmentosum (XP), a rare genetic disorder that makes her extremely sensitive to sunlight. While XP is real, it’s grossly exaggerated in the film, which claims that briefest exposure to direct sunlight would be so catastrophic that it would cause Katie’s brain to fail. Things get complicated when Katie is asked out by longtime crush Charlie (Patrick Schwarzenegger), a young man who loves the very daytime activity of sailing. Not to spoil anything, but when the Chekhov’s gun is literally the sun, you can probably guess what happens. Midnight Sun is not only a hacky cliché, but XP advocates found its portrayal of their condition to be offensively inaccurate.

The star of Netflix’s hugely popular teen movie is always, somehow, finding herself in situations where she’s taking off her clothes—and it’s never in some owning-her-body type of way. She’s just trying to get a rise out of the very boys who are slut-shaming her at every turn. It would be one thing if The Kissing Booth was just another cliché-filled romantic comedy—and it is certainly that—but it’s another that it is so blatantly sexist.

A promising comedic cast and an intriguing real-life premise go to waste as the writers try to jam heartwarming sentiment into a film that should have just been a romp about man-children playing a game of tag. The result is a movie that puzzlingly celebrates self-centered, violent jerks. By the end, the filmmakers are daring you to like these insecure tag-players even as they interrupt weddings and funerals. Bad news: You don’t.

The Muppets are indisputably among America’s most wholesome national treasures. And that’s no reason why their likeness shouldn’t be used for raunchy satire. Perhaps it’s all the more reason—after all, Avenue Q ran for six years on Broadway and continues to tour worldwide. But The Happytime Murders fails not because it’s blasphemous (and it is, in spades). Director and Sesame Street scion Brian Henson misses the mark here because his bawdy, adolescent gags, though delivered by comedic veterans like Melissa McCarthy and Maya Rudolph, are wielded in service of… nothing. If there’s an allegory to be made in this noirish murder mystery, it’s lying at the bottom of a pool of puppet ejaculate.

Dan Fogelman holds your feelings hostage in this morbid melodrama that prioritizes sentimentality over coherent storytelling. Fogelman, the creator of This Is Us, has taken all the wrong lessons from that show’s success. Life Itself has all the markers of a weepie—doomed love, death, orphaned children—but doesn’t bother to develop its characters. Instead he eviscerates them in disturbingly violent ways, and then forces the audiences to watch their deaths over and over again. 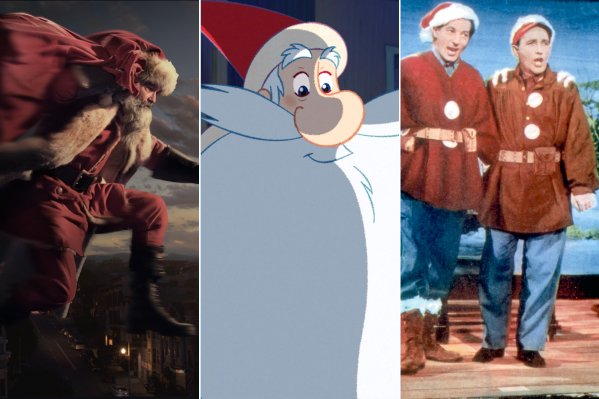 Here Are the 10 Best Christmas Movies for Kids on Netflix
Next Up: Editor's Pick