'Please Have Mercy.' The Wives of Reuters Journalists Jailed in Myanmar Speak Out

The last time Kyaw Soe Oo spoke with his wife before his arrest, he played a prank on her. The Reuters journalist was on a trip to Yangon, Myanmar’s former capital, but on Dec. 12, 2017, he told his wife he had returned early to their home in Sittwe, Rakhine State. “Come open the door,” he urged. “I’m right here.” She fell for it, stepping into the humid evening only to find no one there. Neither of them knew then how long the joke would sting.

Hours after he called home, Kyaw Soe Oo, 28, and his colleague Wa Lone, 32, were arrested. They had accepted an invitation to dine with police, but shortly after they left the restaurant they were apprehended by plainclothes officers for possessing “state secrets.” Both journalists insist they were framed to stop them from reporting on a massacre in Rakhine State that implicated state security forces — a claim supported by a police witness and a senior government official. Despite evidence of the apparent set-up, and a police major’s admission that the journalists did not obtain secret information, the government proceeded to punish them.

The year they have already spent behind bars is a testament to Myanmar’s faltering transition from dictatorship to democracy. Many had expected that when Nobel laureate Aung San Suu Kyi’s quasi-civilian administration took over in 2016, the country would emerge from the military shackles that had held it back since 1962. But instead of democratic institutions being strengthened, the top brass continue to control key levers of power. Activists note that Suu Kyi has presided over a regime hostile to the fledgling free press. In August 2017, Myanmar’s military and Buddhist vigilantes began a campaign of rape, arson and murder that prompted some 730,000 Muslim Rohingya to flee to Bangladesh. State media branded reports of the atrocities “fake news.” In late August, U.N.-appointed investigators called for top military commanders to face genocide prosecutions.

“People should know that [Wa Lone] and Kyaw Soe Oo did nothing wrong,” Pan Ei Mon, Wa Lone’s wife says, cradling her 3-month-old daughter. Wa Lone missed the birth of his first child, while awaiting trial in Myanmar’s Insein Prison, a notorious symbol of political repression during the junta rule. Former dissident Suu Kyi was one of its many political prisoners; today, however, the prison holds journalists and others who have clashed with Suu Kyi’s government.

Reuters' journalists Wa Lone (C, front) and Kyaw Soe Oo (C, back) are escorted by police as they leave the court after their first trial in Yangon, Myanmar, 10 January 2018. Reuters journalists Wa Lone and Kyaw Soe Oo were arrested on the outskirts of Yangon city on 12 December 2017 by Myanmar police for allegedly possessing classified police documents. In September the journalists were convicted to seven years in prison.
Lynn Bo Bo—EPA-EFE/Shutterstock

“I ask the leaders of the government to please, please have mercy on them,” Pan Ei Mon, adds. But she is unlikely to find a sympathetic ear in Suu Kyi’s civilian government. In the face of international condemnation, including from Vice President Mike Pence and the Pope, Suu Kyi has only defended the verdict. “They were not jailed because they were journalists” but because “the court has decided that they had broken the Official Secrets Act,” she said in September. “If anyone feels that there has been a miscarriage of justice, I would like them to point it out.”

Once hailed as a democratic icon, Suu Kyi’s legacy has become increasingly tarnished in the West by her refusal to condemn the violence against the stateless Rohingya or to aid the two jailed Reuters journalists.

As the government and military offered full-throated denials of wrongdoing against the Rohingya, Wa Lone and Kyaw Soe Oo were uncovering information about the bloodshed Myanmar has tried to shield from the world. The Reuters investigation, which was published in February, documented with photographic evidence the slaughter and mass burial of 10 Rohingya men. In return, they were accused of providing information that could be useful “to enemies of the state.”

Their wives, left to raise small children in communities quick to ostracize them, have suffered in particular from the public fallout. Not long after she found out she was pregnant, Pan Ei Mon, 36, was evicted by a landlord unwilling to risk government backlash. Few building owners, once told of her husband’s identity, would agree to rent to her. She eventually found a home in South Okkalapa Township in Yangon, near to where her parents live, but in early December, she was again threatened with eviction.

Friends and relatives too, have turned their backs. Pan Ei Mon said Facebook friends posted things like: “These reporters are paid by U.S. dollars to betray their country.” She says at first she couldn’t believe her friends were sharing these things. “But after reading so many comments, I have just become numb to it.”

In the past, both Pan Ei Mon and Chit Su Win beseeched their husbands to change careers.

“I felt like I was facing this constant dilemma because I wanted to beg him to stop because it was so risky. But at the same time, I knew it was important work and that he was doing what he loved, and supporting his family,” Chit Su Win, 23, says. She had been afraid of her husband getting shot in their native Rakhine State, the epicenter of the Rohingya crisis. She had not given much thought to his possible imprisonment.

Both women worry that their daughters will grow up not knowing their fathers. Wa Lone has gotten to hold his newborn just twice, for a half hour each time.“I really thought that by the time I gave birth, Wa Lone would be free,” Pan Ei Mon says.

Kyaw Soe Oo fears that his own daughter, who was just 2 years old when he was arrested, will forget him. “Our daughter keeps asking why her daddy doesn’t love her anymore and why he won’t come home,” Chit Su Win says, choking back tears. Her daughter sits on her lap, playing a game on a cell phone. As her mother strokes her hair, Moe Thin Wai Zin looks up from her game and points to a picture of her father. “When is Daddy coming home?” 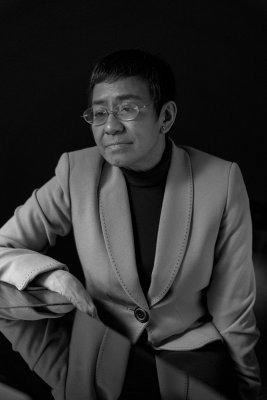 She Reported From War Zones. But Covering Philippine President Duterte Might Be Her Most Dangerous Job Yet
Next Up: Editor's Pick