She Reported From War Zones. But Covering Philippine President Duterte Might Be Her Most Dangerous Job Yet

When Maria Ressa realized she was about to be arrested for doing her job, she reacted in the manner she had learned reporting from conflict zones throughout her 33-year career in journalism: she took a deep breath and assessed the best way to proceed. The situation was manageable, the charges could be overcome, and Ressa, as she had done countless times before, says she resolved to “hold the line.”

“I’ve been a war zone correspondent, I’ve planned coverage when one side is shooting against the other side,” the 55-year old told TIME in New York a few days before she returned to the Philippines and on Dec. 3 handed herself in to authorities. “That is easy compared to what we’re dealing with now.”

What Ressa and her colleagues are dealing with is “a direct assault on press freedom in the Philippines” according to the Committee to Protect Journalists (CPJ). Less than two weeks after the CPJ presented her with an international Press Freedom award, the veteran journalist and former CNN bureau chief posted bail for charges of tax evasion. She is expected to be arraigned February next year.

While the Philippine government denies a political motivation for the charges against Ressa and Rappler, the news site she founded in 2012, international observers regard them as the latest salvo in President Rodrigo Duterte’s bid to muzzle critical press and silence criticism of his administration’s deadly war on drugs.

For Ressa they are symptom of an even deeper malady in the Philippines, which she describes as “ground zero” in the global war on disinformation. “The kind of civil discourse that used to be necessary for democracy—one, we all agreed on facts, two, we actually exchanged ideas—this is gone,” she says.

When Ressa founded Rappler in 2012, the country’s social media environment was opening up new possibilities for civic engagement. The site created a Mood Meter that allowed audiences to log their emotional responses to stories, and its cadre of young tenacious reporters drove millennial engagement with the news.

Back then Facebook counted 29 million Filipinos among its user base, or a little under a third of the population. Today the social media giant’s grip on the country is near absolute: in part due to subsidies that make Facebook free to access on mobile phones, it has almost 70 million users—or 97% of the Philippines’ Internet-connected population.

But the ease with which the Duterte administration has used social media to manipulate public opinion, and what Ressa sees as the tech giant’s failure to protect its users from manipulation, have fundamentally changed relationships between the news and those who consume it. “Technology has no morals and values,” Ressa says, “And the group that actually figured out how to use it and weaponize it, are the authoritarian style leaders.”

Shortly after Duterte’s election, Rappler began investigating how the Duterte campaign built a network of domestic and overseas social media users who disseminated inflammatory and sometimes fake content created by a team of bloggers.

Two of the team’s most prominent “influencers,” pop star and sex advice columnist Mocha Uson and populist blogger R.J. Nieto, were given official roles in Duterte’s administration after he took office. Although both have since resigned their posts, they were accused of singling out and smearing journalists who reported on extrajudicial killings, setting off a cascade of online trolls that harassed them with rape and death threats on Facebook.

“The exponential attacks on social media, the inciting to hate just for doing your job,” says Ressa. “You have no idea when it erupts into real-world violence.”

While real world violence has long been an occupational hazard in the Philippines—the National Union of Journalists estimates 177 reporters and media workers have been killed since 1986—Duterte made it clear reporters would be at mortal risk under his watch. Shortly before he took office on a promise of wiping out crime and corruption, he told journalists in his heartland Davao City they too could become targets of assassination if found to be a corrupt “son of a bitch.”

Now, Rappler and its founder are paying the price for reporting on Duterte’s regime — just as the president’s critics and opposition leaders have been jailed on flimsy premises. Senator Leila de Lima, a fierce critic of Duterte’s drug war, was arrested in February 2017 and charged with drug offenses Amnesty International called “pure fiction.” “The lesson is if you want to criticize and oppose Duterte, you can do so behind bars, but not as a free citizen,” de Lima told TIME from her jail cell in September.

Ressa says the Philippines, where dissent can lead to jail time, and where nobody can put a precise figure on the number of people killed in the drug war (estimates of human rights groups range between 12,000 and 30,000 deaths) should be a “cautionary tale” for the U.S. “With a global platform that connects all of us, you can see there is a playbook,” she says, “in the crosshair of controlling the public narrative are journalists.”

Crosshairs or not, Ressa is determined to hold the line. 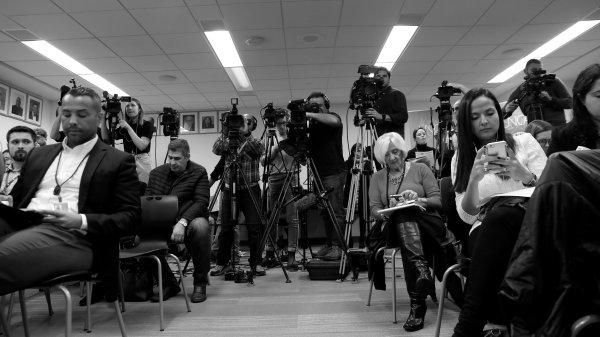 We Need Writers Now More Than Ever. Our Democracy Depends On It
Next Up: Editor's Pick