The Trump Administration Pitched Coal at a Climate Change Conference

The United Nations climate change conference underway here in Poland could play a critical role in the fight to stem greenhouse gas emissions and keep temperatures from rising to unsafe levels.

The Trump Administration showed up to pitch fossil fuels. In a closely watched event Monday on the sidelines of official negotiations, U.S. officials touted natural gas and argued in support of coal’s place in the electricity mix.

“It is important to the overall climate discussion that we consider what’s realistic and pragmatic,” P. Wells Griffith, special assistant to the president for international energy and environment, told the crowd “Energy innovation and fossil fuels will continue to play a leading role.”

Coal, of course, contributes more to greenhouse gases on a unit-per-unit basis than any other electricity source and reducing its role is considered a top priority for scientists who want to address global warming. And climate scientists, along with governments in the vast majority of countries, agree that now is the time to sound the alarm on climate change.

The closely watched event underscores the odd position the Trump Administration has placed itself in the international process to address global warming: the U.S. has abandoned its leadership position on climate change but still retains a seat at the table. And, while other countries use the conference as a venue to advocate for speeding up adoption of renewables and eliminating coal, the U.S. has used the venue to rally for natural gas and “clean coal” even as scientists urge government policymakers to move away from fossil fuels.

“The U.S. government has one side event that just further erodes their credibility and they know it,” says Lou Leonard, SVP for climate change and energy at WWF.

This is the second annual U.N. climate conference — officially known as the Conference of the Parties — to take place after President Donald Trump took office last year and promised to pull the U.S. out of the Paris Agreement, the landmark 2015 deal in which countries voluntarily committed to reduce their greenhouse gas emissions. Trump’s decision to exit the deal cannot legally take effect until after the 2020 presidential election, and the Trump Administration is free to participate in negotiations as it sees fit in the meantime. (It’s also the second year in a row that the Administration has sought to promote fossil fuels on the sidelines of the annual U.N. climate conference).

The U.S. federal government’s presence on the ground here remains robust despite the president’s climate change denial. The country sent dozens of officials from a wide variety of agencies to engage in behind-the-scenes negotiations. But those officials now occupy a diminished role in the negotiating halls as Trump’s approach to climate change is met largely with ridicule on the world stage. The Administration has sought to roll back regulations that deal with greenhouse gas emissions at every turn, and Trump has repeatedly denied the science of climate change himself.

On top of that, the U.S. has declined to send high-level political officials on the level of counterparts from around the world. While other countries typically send ministers to lead delegations, lower ranking authorities traveled to Poland. Griffith, Department of Energy Assistant Secretary Steve Winberg and EPA Principal Deputy Assistant Administrator at the EPA Office of Air and Radiation Mandy Gunasekara all made the trip on behalf of the U.S. (At the 2015 conference, U.S. Secretary of State John Kerry, EPA Administrator Gina McCarthy and President Obama represented the U.S.).

“They don’t have credibility and leadership capacity and leverage, of course, the way they used to,” says Todd Stern, who led the U.S. negotiating team in lead up to the Paris Agreement.

Despite the controversy, there were few surprises in this year’s event. Administration officials, joined on stage by an energy executive, the head of a conservative clean energy group and a representative of the Australian government, ran through their talking points highlighting how U.S. emissions have fallen in recent years and showing projections that fossil fuel use will continue to grow. Administration officials argued that fossil fuel plants can be made cleaner as part of an all-of-the-above energy strategy.

In opposition, protesters interrupted in a coordinated action, initially laughing at a claim from Griffith and then chanting refrains like “leave it in the ground” with several delivering remarks before departing in an organized fashion. “These fossil fools are a joke,” an activist shouted at the start of the protest, “but the impacts on our frontline communities are not.”

Behind the scenes the U.S. position remain dynamic. U.S. negotiators continue to engage actively in the talks and thread a difficult needle: abiding by the Administration’s position while also working constructively in discussions on how to implement the Paris Agreement.

Many of the country’s most significant negotiating positions remain the same as under Obama, though some significant recent changes have ruffled feathers. This past weekend, tensions boiled over after the U.S. joined Saudi Arabia, Russia and Kuwait to oppose endorsing the landmark U.N. report on the effects of climate change if temperatures rise 1.5°C. President Trump said he was skeptical of the document despite its grounding in science.

That’s a sharp contrast from three years ago when the U.S. joined with developing countries in the final days of negotiations in Paris to call for an acknowledgement of the 1.5°C objective. “The delegation here had very little running room to navigate this,” says Alden Meyer, director of strategy and policy for the Union of Concerned Scientists.

But even as the U.S. advocates for coal and enacts roadblocks to negotiations the U.S. continues to advocate for some Obama-era positions, most notably strong transparency provisions to ensure that developing countries largely abide by the same reporting rules as their richer counterparts. Those measures deal with all developing countries but focus closely on China. “There’s no reason for an ultra-conservative administration not to support transparency for China,” says Reed Schuler, a former State Department climate negotiator who now advises Washington Gov. Jay Inslee.

Indeed, pushing for strong measures to hold other countries accountable is a logical step for a president who has claimed that the Paris Agreement serves as a scheme for other countries to harm the U.S. economy. And other Republican administrations have supported such rules for decades. “This has its roots in the Bush Administration,” says George David Banks, a former White House energy advisor in the Trump Administration.

But getting tough on China and promoting fossil fuels doesn’t seem to be of sufficient interest to Trump to keep him from withdrawing the U.S. from the Paris Agreement, despite a consistent claim from the Administration that he’s interested in bringing the U.S. back in the deal.

“There’s the option,” says a senior administration official. “It’s fair to say that there aren’t active negotiations going on at this point.” 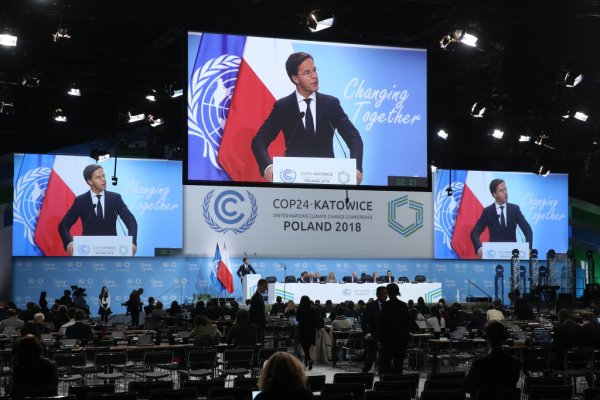 Why We Don't Need a Moonshot to Solve Climate Change
Next Up: Editor's Pick