It’s a question worth pondering as Meng Wanzhou, Huawei CFO and heir apparent to the Chinese tech titan her father founded, languishes in a Canadian jail following her arrest Dec. 1. during a layover at Vancouver Airport.

Huawei is currently the world’s biggest supplier of telecoms network equipment and number two cellphone producer — beating Cook’s Apple into third place in the second quarter of 2018 — and a lynchpin in Chinese President Xi Jinping’s ambitious Made in China 2025 plan to lead certain strategic industries.

“Huawei is a flagship of China’s efforts to almost dominate the high tech area in the future,” says James H. Nolt, a China specialist for the World Policy Institute.

Read more: Lei Jun Wants to Be China’s Answer to Steve Jobs. But Trump’s Trade War Is Getting In His Way

Meng’s arrest, which unfolded just as Xi and U.S. President Donald Trump negotiated a 90-day trade war truce at the G20 in Buenos Aires, was spurred by accusations that Huawei used a Hong Kong shell company to sell products containing American components to Iran in contravention of sanctions.

American prosecutors disagree, however, maintaining that Huawei controls Skycom. They want Meng extradited to the U.S. Meng was denied bail over the weekend with the next hearing due Monday.

The crisis has quickly become political with Beijing summoning the U.S. and Canadian ambassadors and demanding Meng’s immediate release.

Vice Foreign Minister Le Yucheng said Meng’s arrest was a “severe violation” of her “legitimate rights and interests,” adding, “such a move ignores the law and is unreasonable, unconscionable, and vile in nature.”

Meng’s arrest is the culmination of a long American campaign against her company. American intelligence agencies including the CIA and FBI warned consumers not to buy Huawei products, and AT&T and Verizon both pulled out of deals to sell its phones in the U.S.

U.S. allies have followed suit. Australia banned Huawei and ZTE from providing 5G technologies inside the country, while former Canadian Prime Minister Stephen Harper recently called for his government to do the same. Japan and the E.U. have echoed security concerns regarding Chinese tech firms.

That might seem odd, however, given American firms such as Intel, Broadcom and Qualcomm are top suppliers to Huawei — selling an estimated $10 billion worth of components this year. Huawei’s reliance on IP-heavy American technology means Washington could bankrupt the firm by banning these companies from selling Huawei components (though at a significant financial penalty). Chinese telecoms firm ZTE almost went bust in just such a scenario, though Trump then negotiated a deal including a $1 billion fine to allow it to keep trading.

But this vulnerability, in turn, underlines exactly why Made in China 2025 is imperative for China’s ambitions. The nation has never liked being reliant on foreign technologies, though the recent rise of nativism in Washington has thrown those concerns into sharp focus. “They feel they should be independent of outside pressure,” says Nolt.

The reasons are not just commercial. China has also taken lessons from American experiences in the Russian hacking as well as Facebook and Cambridge Analytica scandals, which starkly paint the perils of foreign influence in a nation’s domestic tech space.

“China considers [tech independence] a national security requirement because it doesn’t like foreign companies harvesting vast quantities of data about Chinese citizens and transactions to use for any purpose whatsoever,” adds Nolt.

It’s unclear how the Meng crisis will play out. Chances are that the notoriously transactional U.S. President could use Meng’s detention as leverage to negotiate trade concessions.

“It starts to feel sort of like kidnapping somebody and holding them for ransom,” says Mark Natkin, founder of Beijing-based IT research firm Marbridge Consulting. “It has high potential for very negative consequences for the U.S.”

For one, there are many regulatory and criminal investigations involving American firms in China that could be used to apply pressure. A bolder step may be to limit exports of key materials to the U.S., upsetting supply chains.

But lest we forget that China has a highly opaque judicial system, and stands accused of the mass incarcerations of around 1 million of its Uighur Muslim minority without due process. It also locks up those exercising their right to free speech and refusing to allow foreign citizens to leave the country in order to bring pressure on their relatives accused of financial crimes.

On Dec. 7, U.S. tech goliath Cisco restricted “all non-essential travel” by its U.S.-based employees to China in case of reprisals, according to an internal email seen by Channel NewsAsia. Other U.S. firms including Walt Disney, Google, Facebook and PayPal have reportedly discussed similar action.

“If you’re a high profile American executive working in China right now, you must feel a little less comfortable than you did a week ago,” adds Natkin. 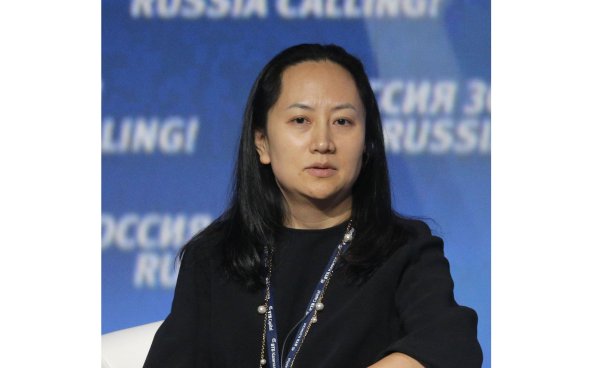 How Huawei CFO's Arrest Could Upend Trump's China Truce
Next Up: Editor's Pick