We Must Protect Journalists Shedding Light on Injustice, Not Attack Them

Human rights lawyer Amal Clooney addressed the United Nations Correspondents Association on Dec. 5, delivering a warning about the persecution of journalists around the world, and in the U.S. This is an abridged transcript of the speech:

I am here tonight to honor you: the journalists being recognised for ground-breaking reporting this year. It feels like an important – even essential – time to honor responsible journalism. Journalism that takes time, tenacity, a commitment to finding reliable sources, to digging deep and checking things over and over again, even if it means allowing another story to come out before yours. We need good journalists more than ever when we are deluged with information from different platforms, and when the accuracy of news is constantly questioned for political purposes. So often we are paralysed and unable to debate how to respond to international crises because we can’t agree on basic facts. You can’t discuss what to do about rising sea levels with someone who believes that they are not rising, because climate change is a hoax. You won’t get far debating immigration with someone who has bought into propaganda that refugees and Muslims pose an inherent danger to society. We do not live in a post-truth world, we just need news that is based on truth. And for that we need responsible journalists committed to exposing it.

And yet you, the press, are under attack like never before. You are being jailed in record numbers around the world. You are dying while covering wars– not only because you walk unarmed into the most dangerous places on earth – but because you are being targeted for exposing crimes committed in war, for speaking the truths that are most difficult for perpetrators to hear.

As we sit here tonight, two innocent reporters sit in a jail cell in Myanmar. Wa Lone and Kyaw Soe Oo were arrested a year ago while working for Reuters on a story that the government did not want to see printed: a story, with photos, of an execution of 10 Rohingya men in Rakhine State, where the U.N. says Myanmar’s army is committing the gravest crimes under international law. A policeman tricked the journalists into coming to a café and handed them rolled-up documents, suggesting they should read them later when they got home. But as the journalists walked out, other officers were lying in wait to arrest them. And then came part 2 of the plan: a show trial in which a conviction for the crime of possessing secret material was guaranteed. I am counsel to Reuters and the two journalists in the case. And at trial, something extraordinary happened. The prosecutors’ star witness, a senior police officer, took the stand – and told the truth. He gave explosive testimony confirming that he heard a senior police chief tell subordinates to plant these documents and stage the journalists’ arrest. But instead of exonerating the defendants, this witness’ testimony led to his own false conviction and imprisonment.

In locking up these two journalists, and a whistleblower, the authorities are of course signaling what can happen to others who tell the truth. The chilling effect is real and has already been felt in Myanmar and further afield. And sadly, similar examples abound in autocratic regimes from North Korea and the Philippines to Hungary, Russia, Turkey and Brazil. The U.S. President has given such regimes a green light and labelled the press in this country the enemy of the people. And of course two months ago, a Washington Post journalist, Jamal Khashoggi, walked into a consulate in Istanbul and was brutally tortured to death.

In many of the cases that I have worked on, too, I have seen journalists and opposition figures ruthlessly targeted, so that they can no longer criticise leaders or run against them in elections. And I’ve represented women and minorities targeted by those who seek not only to silence but to destroy them.

In the Maldives, my client, Mohamed Nasheed, was a journalist who eventually became the leader of the opposition and then the first democratically elected President of the country. Once he was out of office, his rivals wished to keep him out, and the attempt to silence him was brazen. A false terrorism charge was followed by a trial in which two of the three judges had been witnesses for the prosecution. A conviction and 13-year sentence ensued, and prevented him from running in the country’s Presidential elections.

In Egypt, my client Mohamed Fahmy was the head of the Al-Jazeera bureau in Cairo, arrested alongside all the other journalists from this station in a single day. False charges of terrorism and spreading fake news, followed by a trial filled with farcically irrelevant evidence, ultimately led to a 3-year sentence.

In Azerbaijan I defended Khadija Ismayilova, a young investigative reporter who had uncovered evidence of corruption by President Aliyev and his family. The authorities first tried to intimidate her by installing a video camera in her bedroom and publishing the content online. When this did not silence her, they filed five successive bogus cases against her, and ultimately sentenced her to 7 years in prison.

Further afield, in Iraq, my client Nadia Murad and her community, the Yazidis, faced extermination. Nadia lost most of her family in one day when ISIS targeted this non-Muslim group, and took over her village. Nadia was kidnapped and taken into ISIS captivity where she was bought, sold and ‘gifted’ between fighters. She endured rapes and gang rapes, brutal beatings and burnings, all against the background of a constant refrain: that ISIS would wipe her people from the face of the earth.

As we mark, this week, 70 years since the Universal Declaration of Human Rights was adopted, we can only conclude that we are far from achieving its goal of ensuring human rights for all.

Yet we have come a long way. And I am optimistic. I am optimistic when I see that Mohamed Nasheed is no longer in the prison cell where I first met him in the Maldives. After we secured asylum for him in the U.K., he helped his party campaign in his country’s elections and last month they won, restoring the country to a path that respects human rights.

I am proud to watch former Al Jazeera journalist Mohamed Fahmy, whose pardon we secured from President Sisi, now free and working as a human rights activist and campaigner for the release of other journalists in prison.

I felt hope for Azerbaijan when Khadija prevailed in her case and is now back at work reporting on corruption and other injustices in her country.

These are all examples of individuals facing the full force of the state, who refused to be silenced – so that they could be a voice for others.

But most inspiring of all is Nadia.

Nadia became the first Yazidi woman to speak publicly about what happened to her, and thousands of other women and girls. Instead of allowing ISIS to silence her, she has spent every day telling the world what happened, and shaming them to do something. She has implored leaders to either give Yazidis safe refuge or help make her homeland safe enough for their return. She has challenged heads of Arab states to do more to promote moderate Islam. And she and I have lobbied governments and the United Nations with one message: ISIS must be prosecuted because survivors deserve justice.

After a long advocacy campaign, Nadia and I sat in the chamber of the U.N. Security Council and watched 15 hands finally go up to unanimously adopt a resolution that would send a team of U.N. investigators to Iraq. Last Friday, we filed a case on behalf of Yazidi women against the French multinational company Lafarge, which has been charged with complicity in crimes against humanity committed by ISIS. And on December 10, I’ll be in Oslo to watch Nadia step up to a podium to collect the 2018 Nobel Peace Prize. She has come a long way from her village in Iraq, and thanks to her courage and her voice, justice for her community is finally within reach.

This progress would not be possible without you, the people in this room. Many of you here have written about Nadia. The Lafarge investigation in France was triggered by investigative reporting by a local Syrian news outlet and a French journalist on France 24, also represented here tonight. Many of you report the crimes being committed in Myanmar and document the reasons why the journalists who are in prison there should be released.

I also want to recognise the role of the U.N., which reported on each of the journalists’ trials and intervened to call for their release. The U.N.’s investigators told us that the crimes committed against Yazidis in Iraq amount to genocide, and the U.N. Security Council now has a team gathering evidence there for future trials. I would also like to thank the U.N. Secretary-General for his personal commitment to supporting such cases, including his calls for the release of Wa Lone and Kyaw Soe Oo.

In closing let me say a few words about the future. There is much that needs to be done to provide better protection for journalists. States should repeal criminal sanctions in laws that target speech like sedition, blasphemy and defamation, and they should narrow the scope of other laws that can easily be used to silence critical speech. NGOs should push for the release of journalists who are subjected to politically motivated prosecutions wherever they are and for as long as it takes. This is something George and I are focusing on through our Foundation’s Trialwatch program, which will monitor trials of journalists around the world, report abuses and fund legal representation to assist journalists who are unjustly imprisoned. The U.N., for its part, should establish a standing panel of experts who can be on call to investigate credible allegations of serious human rights abuse, including crimes committed against members of the press.

In the last story that Jamal Khashoggi wrote in the Washington Post, published after his death, he lamented the fact that the vast majority of countries in the Arab world lack a free press, and that as a result, millions of Arabs are either uninformed or misinformed. He spoke of a colleague who was serving an unwarranted prison sentence for criticising the Saudi establishment. And he bemoaned the fact that the Egyptian government’s censorship of an independent newspaper “did not enrage or provoke a reaction from colleagues”. His grim conclusion was that, in his words, “[t]hese actions no longer carry the consequence of a backlash from the international community. Instead, these actions may trigger condemnation quickly followed by silence”.

Of course the question now is whether his words hold true in the face of his own brutal killing. Will there just be condemnation, followed by silence?

To honor his memory, and build a safer future for all journalists, we must make sure we prove him wrong. 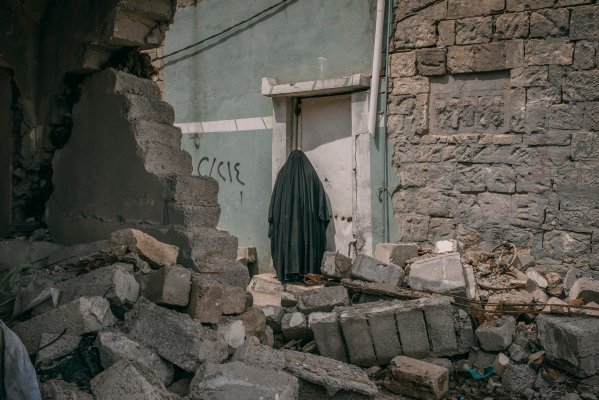 How to Rebuild a City: Cold, Hard Cash
Next Up: Editor's Pick