It’s both incredibly easy and somewhat difficult to describe Nintendo’s fighting crossover game series, Super Smash Bros. In short, it’s a battle royale game that pits characters from different gaming franchises against each other. Dig deeper into the series’ latest entry, Super Smash Bros. Ultimate, and you’ll find more than a fighting game that’s fun for parties. You’ll get a tour through Nintendo’s gaming history, shared via its new story mode, as well as a game that caters to every type of player, from the casual newcomer to the competitive veteran. Super Smash Bros. Ultimate brings back every playable character from the series’ past, adds some new ones, and spares little expense when it comes to giving fans what they truly want from a game where a sword-wielding Mega Man can knock Sonic the Hedgehog into a black hole created by Dr. Mario. Sure, the premise — ridiculous fights between your favorite characters — is the same, but with such a winning formula, why fix what ain’t broken?

Here’s the gist: Super Smash Bros. is a platform-centric fighting game series, the goal of which is to knock your fellow combatants off themed stages and into oblivion. Players pick one of a stable full of video game characters, like Princess Peach, Sonic, or Link, and duke it out in a variety of game-inspired arenas filled with bombs, laser guns, flowers, and the occasional giant dog, among the nearly 100 available weapons and other power-ups.

The original Super Smash Bros. debuted in 1999, and featured a dozen fighters pulled from Nintendo’s library of characters. Super Smash Bros. Ultimate, the fifth entry in the franchise, has a roster over 80 fighters deep. That includes every character from the previous games, plus some new contenders from Nintendo and other participating developers. Nintendo is also planning to release five paid downloadable content packs, each with a new fighter, stage, and accompanying music. The game’s breadth of choice is impressive, and you’re bound to recognize more than a handful of characters, each with their own signature moves and special abilities (save for the few characters with identical fighting styles but different looks, like Daisy and Peach).

New to Super Smash Bros. Ultimate is the inclusion of a single-player “World of Light” story mode, wherein you explore a stylized board game of a world as the roly-poly alien Kirby, sole survivor of an assault by the game’s antagonist. As you defeat evil versions of the game’s fighters and solve simple puzzles, you’ll add them to your roster, as well as collectible Spirits, non-playable minor characters from Nintendo and elsewhere that enhance your abilities (and replace the stickers and trophies from previous games). It’s also where the game takes its primary battle royale gameplay and adds an RPG-like element to the mix.

These single-player encounters are often subject to various conditions that can dramatically alter the gameplay. In some fights, your opponent might be triple the normal size, with your mandate being to knock them off the screen or reduce their health to zero. Other conditions might reduce your strength, flip your control scheme, make the floor extra slippery, or pit you against a half-dozen fighters at once.

While you can just as easily choose to ignore the spirits in every other mode, World of Light encourages you to collect, upgrade, and enhance your team of them. It’s surprisingly complex, and spirit types, stats, and abilities must be taken into account if you want to optimize your chances for success in each battle. Don’t like strategy in your brawlers? Don’t worry, there’s a handy button that lets the computer pick the appropriate squad before each match.

Ultimate’s showcase of minor characters from each franchise is cool, but it only goes as deep as a name and photo. There’s nothing in the vein of a summary or description, leaving you to Google the characters you’d like to know more about in a game that ostensibly basks in its storied history.

While you may lose track of time after each fight, unlocking the over 80 characters takes an unpleasantly long time. Even after putting in hours of fighting time, participating in other game modes, and unlocking fighters when they pop up for surprise challenges, I’ve only managed to unlock 25 more, none of them being the gun-toting witch Bayonetta despite me fighting against her at least twice.

There are a variety of other gameplay options built atop the fighting game’s core. The traditional six-round Classic mode is still available, in addition to new variants like Smashdown, which forces players to pick a new fighter after each battle, or Squad Strike, which makes tag-team fighting an option.

Customizable tournament brackets are also available for competitive players, and support for both local and online play — the latter requiring a subscription to the relatively inexpensive Nintendo Online service — means you can take on anyone if you’ve got an internet connection or another player in your midst. The fact that the Nintendo Switch comes with a pair of included Joy-Cons means you can even disconnect the two and host your own versus match whenever you please. They’re not perfect, and serious players may want to invest in a Switch Pro controller or try and obtain a GameCube controller, favored by diehard fans of the series.

Fights in Ultimate are frenetic, but don’t require a ton of technical skill if you choose to go the easy route. Combos are easy one or two-button affairs, making it easy to pick your favorite character and become familiar with their behavior. Timing is everything, and many characters move about surprisingly quickly. Success is dependent on you executing your signature moves without leaving yourself open to attack. The dozens of items available for use during fights can change the tide of battle, and the 100-plus arenas, each inspired by the games from which the characters originally hail, feature their own set of quirks that may help or hurt you during the course of a match.

Fights in Ultimate are also a real hoot, especially if you’ve got a room full of people playing together. The game supports up to eight players simultaneously. While it sounds great in theory, it turns the screen into a violent explosion of color, an unreadable mess of activity that will leave the victor more confused than the losers.

The sheer level of customization options when it comes to fights makes it easy to create a fighting game that appeals to everyone. Don’t like fighting on the Mario Kart-inspired arena? You’ve got over 100 stages to choose from, so take your pick of something else. Hate when someone throws a bomb at your face right when you recover from a nearly game-ending strike? Cherry-pick (or simply remove) every item from the match to determine which of your friends is the best player when the playing field is evened out.

The Super Smash Bros. series has long since established itself as a fighting game on par with icons like Street Fighter and Tekken. Ken and Ryu are even playable characters! Super Smash Bros. Ultimate cements that legacy, offering players more choices, customization, portability, and extras than most will ever choose to experience. Chances are you’ll never choose to fight as Wario, and you’ll leave a few (hundred) spirits lying around when you’re bored with the game’s story mode. But you’ll have a grand old time getting to know the fighters you love most, even if you did just get knocked into the stratosphere by Bowser Jr.’s errant Pokéball. 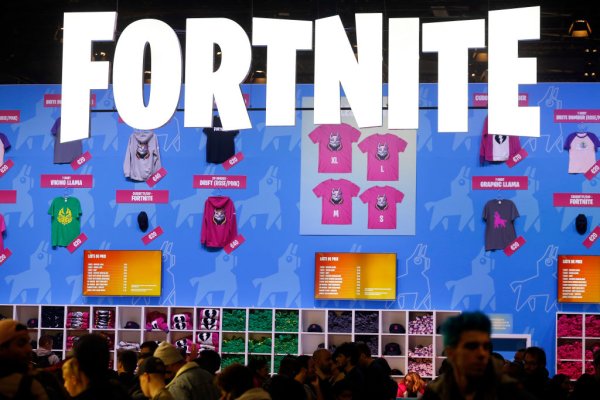 Fortnite Creator Is Launching a Rival for Apple and Google's App Stores
Next Up: Editor's Pick