By Tessa Berenson and Mahita Gajanan

If confirmed by the Senate, Barr would take over the job from Matthew Whitaker, who has served in an acting role since Trump forced out former attorney general Jeff Sessions in November.

Barr, 68, who served as attorney general from 1991 to 1993 under President George H.W. Bush, would return to an agency that has faced repeated attacks from the president amid special counsel Robert Mueller’s investigation of potential ties between the Trump campaign and Russia. Trump, who has repeatedly called the probe a “witch hunt,” sparred with Sessions after he recused himself from overseeing the investigation.

But he has also criticized the investigation, echoing Trump last year when he raised questions about members of Mueller’s team who have made political donations to Democratic campaigns.

“In my view, prosecutors who make political contributions are identifying fairly strongly with a political party,” Barr told the Washington Post in July 2017. “I would have liked to see him have more balance on this group.”

Barr, who supported Trump in 2016, also defended the president last year when Trump called for the Justice Department to investigate his former 2016 rival Hillary Clinton over various matters, including an Obama-era uranium mining deal.

“To the extent it is not pursuing these matters, the department is abdicating its responsibility,” he said.

And he supported Trump’s decision to fire FBI Director James Comey — a controversial move that may be part of Mueller’s investigation into whether Trump has obstructed justice.

Barr wrote that Comey had “sandbagged” the FBI’s leadership and engaged in a “grave usurpation of authority” in his handling of the Clinton email probe. ““It is not surprising that Trump would be inclined to make a fresh start at the bureau,” Barr wrote. The same year, Barr also said that there was “nothing inherently wrong” with Trump calling on the Justice Department to investigate Hillary Clinton.

“He has actually held this position before,” Rangappa says, referencing the fact that Barr served as Attorney General from 1991-1993 under George H. W. Bush. “It’s not like [Trump] put a Fox News anchor” in the position. Barr has a “generally mainstream GOP and corporate escutcheon” says Norm Eisen, former special counsel for ethics and government overhaul under President Barack Obama.

Most Senators stayed quiet on Barr on Friday, but even Senate Judiciary Democrat Sheldon Whitehouse began his statement on Barr with the line, “Barr is an experienced and able lawyer.”

Still, the Left isn’t without its concerns. Barr has taken an expansive view of executive power.

“He is a seemingly mainstream Republican who is on the Trump side on critical — and to the president, existential — issues involving the president and his powers,” says Eisen. “It’s one thing to coddle the president by failing to check him, say for the sake of his judicial nominees. But with Barr, as with [Supreme Court Justice Brett] Kavanaugh before him, they are affirmatively pushing presidential powers poison where others in the mainstream fear to tread.”

Eisen also cited Barr’s comments on Clinton’s role in the Uranium One deal another concern.

Whitaker, who has served in an acting capacity since early November, also made public statements critical of the special counsel investigation, notably saying on a CNN segment that a future attorney general could cut its budget “so low that his investigation grinds almost to a halt” and arguing that Mueller had crossed a “red line” by looking into Trump’s financial records.

After serving in the Bush Administration, Barr went on to work as a private attorney. He has previously said that an attorney general should adhere to the “rule of law” and offer advice to the president without considering political consequences, according to the Times.

In a tweet announcing the pick on Dec. 7, one day after the final burial of George H. W. Bush, Barr’s former boss, Trump wrote that Barr is “one of the most highly respected lawyers and legal minds in the Country, he will be a great addition to our team.”

As Barr is considered to recover his post as the top law enforcement official in the country, all eyes will be on how he’ll handle oversight of the special counsel’s investigation, which is being led by someone he previously supervised. (Barr was Mueller’s boss in the Justice Department in the early 1990s. Mueller served as head of the Criminal Division while Barr was Attorney General.)

“Barr will supervise Mueller as any attorney general would consistent with the special counsel regulations,” says David Rivkin, who worked with Barr in the George H.W. Bush Administration. But Rivkin notes that oversight of the special counsel is a very small part of the overall job of the attorney general. “What matters vastly more to me is what’s going to happen in the next two years with the House being controlled by the Democrats with enormously aggressive investigatory agenda that is certain to implicate key constitutional issues,” he says, and notes that he thinks Barr will be well equipped to handle those battles.

For now, Whitaker will have a bit more time on the job. The hearing for Barr likely won’t be until next year.

But when it does occur, though it’s sure to be contentious given the high-stakes nature of the position, Barr will face good confirmation chances. If the hearing occurs in the new Congress, the margin will be 53-47 Republicans, meaning that all Democrats and three Republicans could oppose him and he would still be confirmed.

“Having previously served as Attorney General under President George H. W. Bush, Mr. Barr is a known quantity, a man of the highest integrity and character, and has an impeccable reputation,” Republican Senate Judiciary Committee member Lindsey Graham said in a statement. “I will do everything in my power to push him through the Senate Judiciary Committee and onto the floor of the Senate for eventual confirmation as soon as possible.”

Alana Abramson contributed to this report. 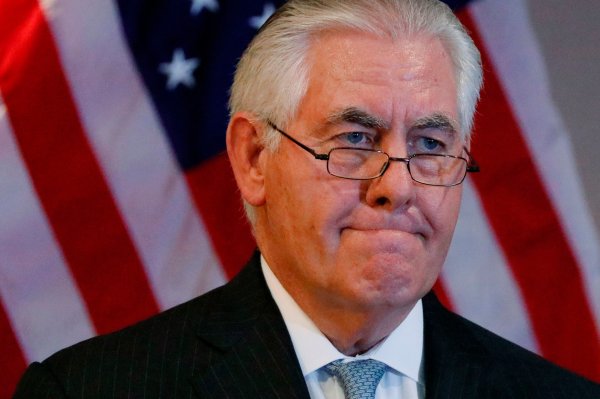 'You Can't Do It That Way.' Rex Tillerson Opens Up On His Tensions With Trump
Next Up: Editor's Pick