The new movie Dumplin’, which premieres on Netflix Dec. 7, mixes the pain and acute embarrassment of being a teenager with the sweetness and tension that belie many female relationships. And it boasts a very special ingredient: the can-do spirit and songs of Dolly Parton.

Based on Julie Murphy’s 2015 young adult novel of the same name, Dumplin’ stars Danielle Macdonald, who broke out as an aspiring rapper in 2017’s Sundance darling Patti Cake$. In it, she plays Willowdean Dixon, a Parton-obsessed Texas teen who struggles with her body image, especially following the death of her beloved aunt, her primary cheerleader in life. Unmoored, Willowdean is left to contend with her mother Rosie (Jennifer Aniston), a former beauty queen and current beauty pageant organizer. Rosie loves her daughter but can’t help making barbed comments about her weight, including constantly calling her “Dumplin’,” a nickname that invites taunts from others.

In a fit of rebellion, Willowdean decides to join the beauty pageant Rosie oversees along with a team of other misfits. Though at first she just wants to irk her mother, she soon finds herself upending beauty standards and claiming her place in the spotlight with the help of friends and a team of drag queens who specialize in dressing like—who else?—Dolly Parton.

Macdonald, 27, says making the film took her back her own adolescence, which was marked by insecurity. “I wanted to do it for my 16-year-old self,” she tells TIME. “There aren’t plus-sized teens represented in film who aren’t made the butt of a joke. I had to be a part of making this a reality.”

Though Dumplin’s Willowdean and Patti Cake$‘ Patti couldn’t be more different, the roles are thematically similar. In both films, Macdonald movingly depicts what it’s like to be a young person aspiring for something beyond what she already has. Macdonald particularly relates to Willowdean’s struggle to fit into a culture that has rigid ideals surrounding beauty. Though the character might appear to be thriving—she has good friends and the interest of a cute boy—the loss of her aunt and her complicated relationship with her mother erode her self-esteem.

“You can drive your own self crazy. You don’t have to be in a bad situation or be bullied every day to feel this way,” she says. As a teenager, she recalls, “I was constantly judging myself. That’s really the thing that gets you.”

Working with a female director, Anne Fletcher, and a core cast of mostly women also helped Macdonald to work out her own conflicts about the role. Originally from Australia, she was unfamiliar with the intense world of American beauty pageants, aside from having seen Miss Universe on TV. Pageants seemed “like a very American thing, a faraway movie thing more than reality,” she says.

Many of the girls on set had been involved in beauty pageants, and they offered Macdonald a sense of what drove them to participate in a tradition that many, including her character, at first, look down upon as shallow. “They love it,” she says. “It’s given them a confidence and a sisterhood.” They also helped to ease her anxiety about appearing in a swimsuit and dancing in front of an audience.

Dumplin‘ is propelled by a soundtrack by Parton, whose original song for the film, “Girl in the Movies,” is up for a Golden Globe. With a devotion inspired by her aunt, Willowdean knows every Parton song and shines in the moments during which she loses herself to classics like “9 to 5” and “Jolene.” The singer’s energy, even if it’s not seen, was felt by the entire cast. “Dolly is front and center,” says Macdonald. “She’s like, ‘Go be who you are. I’m going to be me.'”

Macdonald only wishes that more movies like Dumplin’ had been around when she was younger. Girls who watch it now can connect with the feeling of being one’s own harshest judge, she says, and take comfort in knowing that they are not alone. “You may realize you don’t have to be so hard on yourself,” she says. “The big message is: you’re the star in your own life. You don’t have to change, you are who you are. Go and do what you want to do.” 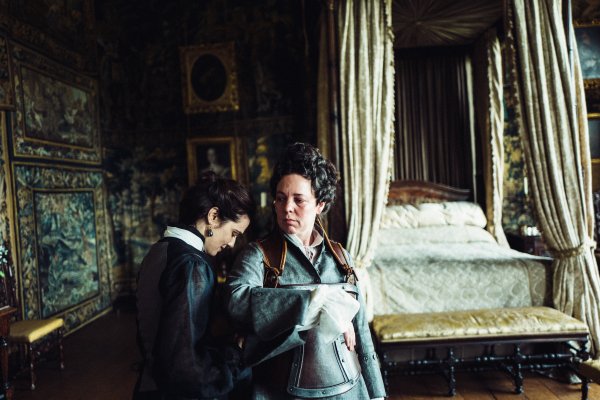 The True Story Behind The Favourite
Next Up: Editor's Pick