France's Yellow Vest Protests Have Been Framed as a False Choice of Climate Vs. The People

Protestors stand in front of the police during a protest of Yellow Vests against rising oil prices and living costs near the Arc of Triomphe on the Champs Elysees. Security forces in Paris fired tear gas and water cannon to disperse protesters. Paris, France, November 24, 2018.
Emeric Fohlen/NurPhoto via Getty Images
Ideas
By Kumi Naidoo
Naidoo is the Secretary General of Amnesty International.

This time last year, French President Emmanuel Macron was reveling in the global spotlight as he prepared for his “One Planet Summit,” a meeting that promised to “make our planet great again” by taking urgent action on climate change. Twelve months on, things look pretty different. France is reeling from protests following Macron’s attempts to increase the green tax on fuel as part of a wider economic reform agenda. Over the first weekend in December, the protests intensified, leaving hundreds injured, among both protesters and police forces.

The loose movement behind the protests is known as “gilets jaunes,” or Yellow Vests. Over the past few weeks, this movement has swelled in ranks as more and more people who barely survive on meager wages and are threatened with a decline in labor protection have joined to express their anger over the French government’s proposed economic agenda. Young people also took part in demonstrations, with high schoolers and students blocking their schools or universities and protesting.

Facing this multifaceted movement, President Emmanuel Macron’s government announced it will drop the fuel tax increase. But there is little sign that tensions will ease any time soon. And in part, that’s because of the rising economic inequality gap between the rich and the poor across the country.

The protests have sharply polarized what is already a dangerously divided debate concerning climate change, human rights and the need to protect the most marginalized and disadvantaged in our societies.

Some of the green groups currently gathered at the U.N. climate change summit in Poland are worried Macron’s climb-down on the tax sends “a bad signal,” just when the world needs to increase its efforts on moving away from fossil fuels.

Meanwhile, some politicians are attempting to exploit the situation. President Donald Trump joined the fray, tweeting on Tuesday: “I am glad that my friend @EmmanuelMacron and the protestors in Paris have agreed with the conclusion I reached two years ago. The Paris Agreement is fatally flawed because it raises the price of energy for responsible countries while whitewashing some of the worst polluters.”

President Trump, like other climate change skeptics, favor framing the debate as a choice between tackling climate change versus protecting people and jobs. But it would be a mistake for the environmental movement to respond by playing his game and arguing that the moral imperative to tackle climate change must automatically override any hardship people might face in the short-term due to transition measures.

Protecting people’s livelihoods, enabling them to live their life in dignity, and stopping climate change are in fact part of one and the same struggle. Indeed, the Paris Agreement recognizes the need to integrate environmental protection with advancing economic and social rights such as work, standard of living and health.

As in many other countries, we fear that it will be France’s working poor who will be least able to deal with dangerous effects of climate change such as increasing pollution and associated health problems due to lack of resources. Around the world, we routinely see that it is the poorest who face the greatest struggle to survive, let alone recover, every time a climate-related weather event hits them.

The French government must establish climate protection policies that reduce inequality, rather than deepen it. This includes policies such as subsidies to enable people to switch to clean energy sources rather than punishing them for failing to do so. It means putting the burden on fossil fuel corporations rather than on consumers, particularly those with a low income.

No one in Macron’s government, let alone the President himself, would openly advocate that France’s working poor should literally have to pay the price for the country’s decarbonization efforts. However, before governments make any significant economic or fiscal changes, they need to properly consider how it would impact people who are already struggling economically.

The irony is that this crisis is taking place on the eve of the celebration of the 70th anniversary of the Universal Declaration of Human Rights – the first ever global bill of rights, which was adopted and signed by governments in Paris on Dec. 10, 1948.

Seventy years on from the adoption of the Declaration, we see rising intolerance, extreme inequality, a rollback on human rights protections together with a lack of urgency to move faster on climate change. In many ways, as the current unrest in France proves, we are in danger of creating the type of world which the governments who adopted the Declaration in the wake of the Second World War had pledged to prevent.

People all over the world desperately need their leaders to demonstrate the leadership on human rights that the drafters of the Declaration demanded, especially in the face of the climate crisis we are all facing. President Macron was mistaken to assume that the fight against climate change is solely to make our planet great again. It is in fact about putting people first and making human rights great too. 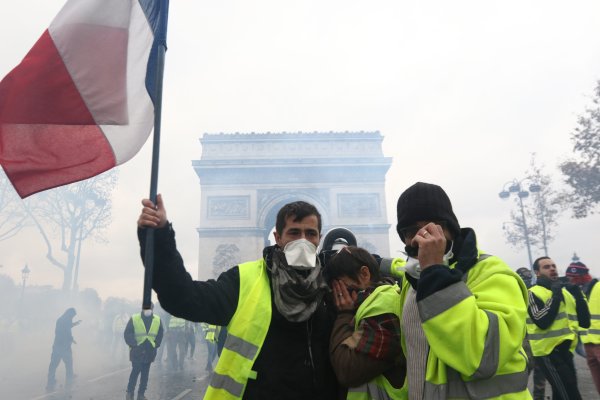 The Yellow Vests Expose How Fragile Emmanuel Macron's Hold on France Really Is
Next Up: Editor's Pick