President Donald Trump attended the funeral of former President George H.W. Bush on Wednesday, and of course, Stephen Colbert, found the humor. “They even assured him that the choir would drown out the sound of other ex-presidents rolling in their graves,” Colbert joked in his monologue on Wednesday night’s episode of The Late Show.

The late-night host pointed out that not insulting Trump was nearly impossible by virtue of comparison, like when Bush’s biographer Jon Meacham said in his eulogy that Bush “life code was: tell the truth; don’t blame people.” Colbert wondered if that was already bending the rules. “As soon as you start praising someone’s honesty, you’re automatically throwing shade at Donald Trump. I mean, Obama made Trump seem like a bad president just by sitting next to him.”

Speaking of former President Barack Obama, Colbert said, “It was quite a moving sight to see the presidents and the first ladies in the front row, waiting to honor President Bush, chatting comfortably with one another,” Colbert said. “Until Trump showed up, and then it became silent-staring time. Donald Trump is the only person in the world who can bring down a funeral.” 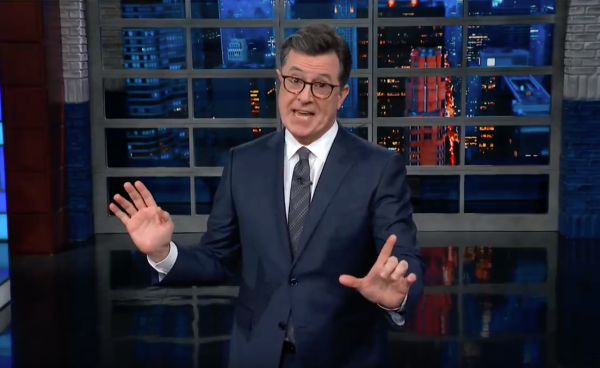 Stephen Colbert Busts Out His Melania Trump Impression
Next Up: Editor's Pick