The crew aboard the USS George H.W. Bush paid tribute to the aircraft carrier’s late namesake with a flashlight vigil.

Grouped together with their flashlights pointed toward the sky, the crew formed the letters of Bush’s initials and the number 41 to mark his number in the line of U.S. presidents. They held the vigil to honor the former Commander-in-Chief’s support of volunteerism.

“The crew aboard the aircraft carrier USS George H.W. Bush (CVN 77) honored President George H.W. Bush’s vision of volunteers as points of light in their community by holding a flashlight vigil,” said a post on the ship’s Facebook page. “Together, with communities across America, we raised our lights to brighten the night sky with ‘a thousand points of light.'”

Bush, who died Nov. 30 at the age of 94, made popular the phrase “thousand points of light” when talking about volunteer organizations in his acceptance speech for the presidential nomination in 1988. He said of the groups, “a brilliant diversity spreads like stars, like a thousand points of light in a broad and peaceful sky.”

On Wednesday, former President George W. Bush eulogized his father at a state funeral, calling him “the brightest of a thousand points of light.”

The elder Bush was a naval aviator during World War II, based on the aircraft carrier USS San Jacinto. He famously bailed out and survived when his aircraft was shot down in 1944 after an attack on a Japanese target. 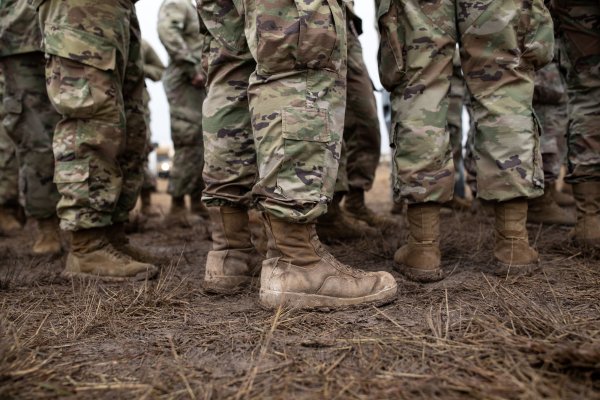 Inmates Created 'Sextortion Ring' to Bilk $560,000 From U.S. Troops
Next Up: Editor's Pick