How to Rebuild a City: Cold, Hard Cash

A woman stands among buildings damaged by airstrikes in southwest Mosul on April 3, 2017
Emanuele Satolli for TIME
Ideas
By Nick McDonell
McDonell's latest book, The Bodies in Person: An Account of Civilian Casualties in American Wars, was published in September

It is fall in Mosul, the season’s first cool breezes blow off the Tigris, and I am walking around a 12th century castle with my friend Safwan. We have spent the morning scouting on behalf of an NGO dedicated to direct cash assistance. The surrounding blocks are destroyed, but several families are trying to move back anyway, clearing the wrecked Ottoman courtyards, stone by stone. They are excellent candidates for support, but Safwan, a soft-spoken 29-year-old engineer, remains frustrated. “There is no progress with the mass of destruction,” he says. “It needs effort from foreign countries and serious work from the government. Until now, we haven’t seen that.”

Safwan’s frustration is common in Mosul. Though the city was liberated from ISIS in 2017, millions of tons of rubble are yet to be cleared; 40% of old Mosul remains disconnected from any water network; electricity is erratic; in certain neighborhoods, corpses and IEDs remain on the roadside. Sixty-five percent of the city’s housing stock was damaged or destroyed; in the less damaged quarters, spiking rents drive families into debt, while a lack of jobs leaves young men idle in tea shops. The surviving hospitals and schools cannot support the population of 1.5 million; in the street, children orphaned in the battle beg for change, then curse those who refuse them.

I wonder what sort of men they will become. In 2009, I walked around this same castle with American soldiers. Before we set off, a lieutenant told me we would be attacked in less than 30 minutes–it happened every time he patrolled there. We checked his watch. Twenty-two minutes later, a grenade bounced up the alley behind us. That day, his patrol caught the attacker–a teenager, who said he did it for $15. In the following years, ISIS rose and fell on the backs of such young men. Today there is no fighting in Mosul, but the city remains devastated psychically, as well as physically. A great deal of work is necessary to repair it.

Why, though, should Americans help with that work? When I speak with people interested in Mosul’s reconstruction, I hear surprising political overlaps, encounter strange bedfellows. For some, rebuilding the city is attractive because it decreases the number of Iraqis seeking refuge in Europe, or the U.S. It appeals to others because it moves resources from wealthy, thriving cities to a poor destroyed one, and so is a form of economic redistribution. Some are interested in protecting Mosul’s cultural heritage. Still others like the idea because it could balance competing influences in the region; increase stability; forestall, perhaps prevent, the rise of another ISIS-like terrorist group.

There is truth in each of these reasons. But, finally, the arguments all pale in comparison to the decent people, living and dead, caught between the horrors of ISIS and the “annihilation tactics,”–as Defense Secretary James Mattis called them–of the Coalition liberators. Tens of thousands of Moslawi civilians were killed. They make the point with more authority than anyone else can hope to summon. Mosul has joined the ranks of cities destroyed but insisting on rebirth: Raqqa, Aleppo, Hue and further back, Dresden, Hiroshima, Warsaw. The world does not remember our daily arguments, but it will not soon forget these cities, and the innocent people, no different from you or me, who died.

Eventually It Will. Mosul, settled more than 4,000 years ago, has seen many empires fall; we are not a new species of historians. But within the view of our limited horizon, it remains for us to honor the dead of those cities. To remain stubbornly dedicated to decency in the face of violence, just as many Moslawis were, against overwhelming odds. To take up, in daily opinion, the commonsense notion that if we destroy a place, whatever the reason, we should help to rebuild it. To insist that attention to foreign casualties in an unpopular war is not hopeless or naive, but of a piece with the finest traditions of human thought. To be aware that or to know that, were the situation reversed, the people of Iraq would devote some of their own attention to us, and our cities–none of which, by virtue of unpredictable fortune, have ever been comparably razed to earth.

But how to proceed? The task is daunting. Fortunately, some inspiring work is being done. Most impressive to me are the programs dedicated to direct, unrestricted cash assistance in Mosul. The selection process is rigorous, but the idea is easy: give people money, no conditions attached. A destroyed city presents a shifting constellation of problems for every resident; agility is key. No in-kind donation is as versatile as cash, no research can equal a local’s grasp of what her family needs under these circumstances. If there is a lesson to be learned from the last 15 years of war, it is that opinion of Iraqis at the most local level determines the future of their country, as much or more than any foreign power, or central government. And according the Cash Consortium of Iraq, which coordinates such programs, executed by Mercy Corps, the Norwegian Refugee Council, the Danish Refugee Council, the International Rescue Committee and Oxfam, 99.5% of beneficiaries in Mosul prefer unrestricted cash assistance to other forms of aid.

Cash aid has been extensively studied, and is gaining traction. A recent study funded by USAID and Google.org and executed by GiveDirectly–the organization I am helping to explore projects in Iraq–found cash more effective for nutrition than a traditional nutrition program in Rwanda. It is becoming the benchmark against which programs are measured, across metrics, increasing accountability for the whole sector. The potential for unintended negative effects must continue to be studied–but so far, they haven’t been consequential. And the value of cash to individual Moslawis, right now, is particularly significant. Early dollars get people on their feet. Three thousand dollars in Mosul, these days, allows a neighborhood grocer to fix up his bombed out shop and buy a month’s stock; or a family of seven to clear, roof, plumb and wire their rubble-filled house.

To put those $3,000 in context: the first year I walked around that castle, the U.S. allocated $144 billion–of the $1.6 trillion it would spend–to its ill-defined missions in Afghanistan and Iraq. Today, damage estimates for housing in Mosul are a fraction of that–$5.1 billion to $6.9 billion–but so far in 2018, the Trump Administration has put only $7.7 million, via the U.N., toward shelter construction in the city. This speaks to its general foreign policy. The Administration’s 2019 budget eliminates much foreign aid, reduces State Department spending by a third–and increases the Pentagon’s budget by $47 billion.

The dominance of the U.S. military, however, isn’t in doubt, and wise engagement requires neither military involvement nor nation building. Instead, we need to put ourselves in the shoes of Moslawis–to take seriously what, overwhelmingly, they say they want: a little money, and then for us to get out of the way. Cash is not a cure-all, but it is among the best examples of how to engage with Iraq, and foreign aid generally–modestly, with careful evaluation, according to local will. We need to have the sense and humility to trust them to know what’s best for Mosul.

For Americans, contributing to the city’s reconstruction can be part of the ongoing, difficult task of reconciling our highest ideals with our behavior on the world stage. This was partly the spirit of the Marshall Plan with which we infused post–WW II Europe with money, after we bombed its cities, fighting a different tyranny. As Dwight Eisenhower argued in 1953: “We pay for a single fighter with a half-million bushels of wheat. We pay for a single destroyer with new homes that could have housed more than 8,000 people … This is not a way of life at all, in any true sense.”

Rebuilding cities was no less daunting in Eisenhower’s time. It required brave, even idealistic, thinking. Such thinking is today supported by rigorously collected evidence, and the lessons of wars, dearly bought. 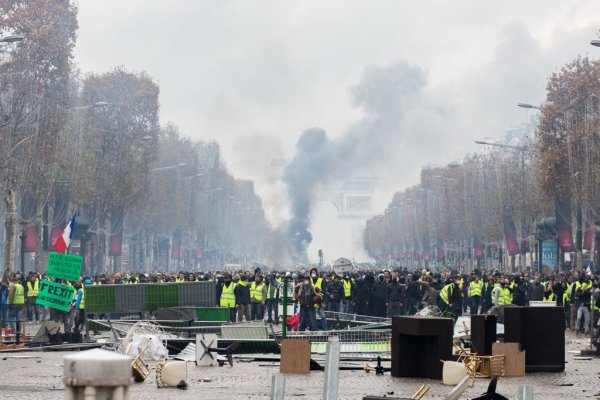 France's Fuel Tax Protests Have Been Framed as a False Choice of Climate Vs. The People
Next Up: Editor's Pick